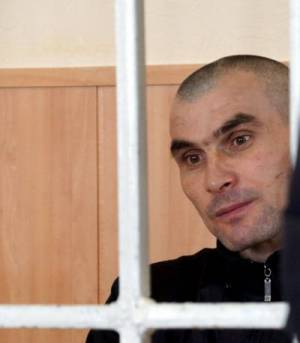 A Russian court has convicted Serhiy Lytvynov of a ‘crime’ which was only reported a year after it allegedly took place, and just after Russia’s Investigative Committee had been forced to withdraw war crimes charges.  Lurid claims that Lytvynov had murdered and raped 39 civilians, including elderly women and young girls, in Donbas had been shown on all Russian television channels and Lytvynov was billed as monstrous proof of Ukraine’s ‘genocide of the Russian-speaking population in Donbas’.  It was doubtless galling when the defence demonstrated that the crimes could not have happened, since the people named and their addresses were entirely fictitious.  Having held Lytvynov in prison for a year by that stage, Russia could have quietly let him return home.  Instead they came up with a remake.  This proved hardly less implausible than the war crimes charges, yet that concerned neither the prosecutor who demanded 9 years, nor Judge Svetlana Shapavalova from the Tarasovka District Court in the Rostov oblast who on April 20, 2016 sentenced an innocent man to eight and a half years maximum security imprisonment.

Ukraine’s Foreign Ministry has expressed protest over the ruling and demanded that Lytvynov be released and returned to Ukraine.  It is to be hoped that extradition procedure, like with Nadiya Savchenko and other political prisoners will be initiated.  In the meantime, Lytvynov’s lawyer has already lodged an appeal, and says that preparations are underway for an application to the European Court of Human Rights.

Lytvynov is a 33-year-old cowherd from a village in the Luhansk oblast. In August 2014, he had an inflamed tooth that badly needed treatment, and the clinics he would otherwise have gone to in Ukraine were under Kremlin-backed militant control.  He was advised to try a hospital across the border in the Rostov region in Russia, where he was placed in a Russian ward with militants fighting in Donbas.  He was seized from there and savagely tortured, until he signed ‘confessions’ to multiple war crimes which he was supposed to have committed as a member of the Dnipro volunteer battalion.

The Investigative Committee’s announcement about the charges against Lytvynov from Oct 1, 2014 can still be read here.  A slightly earlier pronouncement about ‘genocide of the Russian-speaking population’ had prompted mirth, and the Investigative Committee clearly viewed Lytvynov as a trophy, to be used as ‘proof’ of such ‘genocide’.  The video of Lytvynov ‘confessing’ was first posted on that site, and then widely broadcast on television.

The fact that as soon as Lytvynov was finally allowed a proper lawyer, he stated clearly that his ‘confessions’ had been given to stop the terrible torture would doubtless have been ignored.  His lawyer Viktor Parshutkin went far further and proved that Lytvynov’s supposed ‘victims’ were figments of the investigators’ imagination.

The Ukrainian had already been in Russian detention for over a year by that stage and the original charges had been much trumpeted in the pro-Kremlin media, so the investigators wanted to ensure that Lytvynov was not released.

There is no record of Lysenko having entered Ukraine via a part of the border still under Ukrainian control.

Nor is there anything to indicate that Lysenko owned the two cars, in fact, quite the contrary.  Information from the Ukrainian Prosecutor General’s Office, the Traffic Police and border guard service indicated that the Opel Frontera had belonged to somebody else until 1997 when it was taken off the register.  Its registration number, however, was held by a Zhiguli which the police are searching for.  The other car was registered under a different name altogether (more details here).

Parshutkin tried to get these charges classified as ‘war crimes’ so that they could apply for trial by jury.  Jury members are far more likely to balk at passing an obviously unjust verdict.  The application was unfortunately rejected.

Lytvynov is no political prisoner in any normal sense of the word and would scarcely be able to explain what is happening in the country.  He can, however, and has vividly described the torture he was subjected to.  He is equally adamant that he had never set eyes on Lysenko or set foot in the place where this ‘robbery’ is alleged to have taken place.

There was no robbery and this was undoubtedly clear not only to Anton Migunov from the Investigative Committee, but to every person who had dealings with the case.  The cynIt is to be hoped that Ukraine’s Foreign Ministry will now take over and seek Lytvynov’s extradition, together with that of Nadiya Savchenko, Oleg Sentsov,