Sexual charges against renowned accordion-player slammed as fabricatedFamous accordion-player sentenced to 13 yearsFamous accordion-player Ihor Zavadsky still in SIZOFamous accordion-player remanded for another monthIhor Zavadsky remains in custody despite health concerns and doubts about the caseSelective criminal investigation initiated over “Lukyanivka. Prison No. 1 programmeDetention Unit film and its possible ramificationsShocking statistics in Ukrainian penal institutionsDeath of Dnipropetrovsk remand prisoner to be reinvestigatedIhor Zavadsky as a mirror of the Ukrainian justice systemUkrainian musician finally freed after 4 years imprisonment on rigged chargesOn attempts to destroy accordionist Igor Zavadsky, or four years in prison on false chargesOne of the people in the journalist programme “Lukyanivka. Prison No. 1 beaten up
• Topics / The right to liberty and security
• Topics / The right to a fair trial 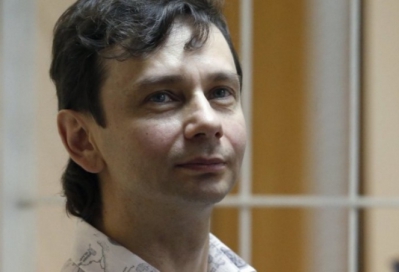 It should have been victory against a terrible miscarriage of justice.  Instead the Kyiv Court of Appeal’s ruling on April 20 has caused bemusement.  The convictions against Ihor Zavadsky, a world-renowned accordionist and two other men were quashed, however Zavadsky remains in detention over four years after his original arrest on fabricated charges.  The case has been sent back to the same original court for re-examination and Zavadsky’s lawyer, Anna Lytvyn from the Kharkiv Human Rights Group, is in no doubt that her client’s innocence will be proved.  Every month in detention is, nonetheless, only compounding Ukraine’s grave violation of Zavadsky’s rights, as will certainly be confirmed by the European Court of Human Rights.

Zavadsky was arrested, together with his agent Andriy Bryhida and driver Andriy Boiko on 23 March 2012.  The charges were grave, of sexual crimes against children, with Zavadsky accused of abusing children who came to him for lessons.  The arrests, however, were made on the basis of a faked complaint, and there is no evidence of any child haven’t complained to his parents about Zavadsky.  Quite the contrary, since many former students have campaigned for his release.

There is, in short, no evidence that any crime was ever committed.  A few months after Zavadsky’s arrest, a TVi documentary suggested that Zavadsky had been set up by a rival.  Certain people have been named in this context and although the suspicions are unproven, they are only strengthened by the level of falsification of evidence.

A video was produced and widely shown, which certainly appeared to give substance to the allegations.  The video footage was supposed to be from a hidden camera long placed by investigators in Zavadsky’s flat and showed a naked man and child.  The video, however, was very clearly of somebody else, with the man on it much more solid than Zavadsky, who is of slight build.  Demands to have an expert assessment of the video’s authenticity were rejected.  The video was not in fact ever used in court.  This may be because the defence had demonstrated its flaws, or simply because it was only ever a ploy to set the public against Zavadsky and convince them of his guilt.

Zavadsky was tortured in prison with the police hoping to compensate for the lack of any evidence through a ‘confession’.  Zavadsky held out and has throughout the four years continued to deny all the charges.  The torture left its mark, especially on his eyesight.  The musician had recently had an operation on the retina.  During the first night after his arrest, he was beaten, including around the head until he lost consciousness, by between 5 and 7 police officers.  The severe damage to his eyesight, as well as evidence of other torture, is documented and forms part of Zavadsky’s application to the European Court of Human Rights.  So too does the refusal of the court to accept Zavadsky’s complaint of torture during the initial detention hearing on March 26 when there would have been visible signs confirming his allegations.

The number of gross irregularities in this case was huge.  There is evidence that minors were taken to the Shevchenkivsky police station and interrogated without their parents’ knowledge or consent.  The claimed victims were placed under heavy police pressure, which included the threat of criminal proceedings against their parents.  The formal decision to not bring criminal charges was only signed after the case had been passed to the court.

The so-called ‘witnesses’ brought in to oversee legality during searches were, in fact, investigators, and even the protocols of court hearings were ridden with infringements, and aimed at concealing the glaring flaws in the trial.

The irregularities were all demonstrated by the defence.  The Podolsky District Court even accepted 232 of the 266 objections to the protocols, effectively acknowledging the falsification.

And yet, in July 2014 the same judges convicted all three men.  Zavadsky was sentenced to 13 years, Bryhida to seven, and Boiko to three years restricted liberty.

The appeal hearings only began a year later in August 2015.  Bryhida was at least released from custody in January 2016, with his lawyer Mykola Kusnirenko explaining the release as due to the “obvious cases of falsification”.

For a while it had even seemed that the prosecutor might coerce the court into allowing the irregularities to be somehow rectified, but with the convictions remaining untouched.  Thankfully the Kyiv Court of Appeal did understand that there were just too many flaws and quashed the convictions.  It still refused to release Zavadsky from custody despite guarantees from an MP, a renowned Ukrainian actress and the director of the Kharkiv Human Rights Group.

The resistance demonstrated by the prosecutor’s office and the refusal to release Zavadsky are immensely disturbing.  The irregularities in this case do not pertain to careless paperwork, but indicate deliberate falsification of grave criminal charges and the evidence used to convict three men.  There can be no justification for continuing to hold Ihor Zavadsky in custody.