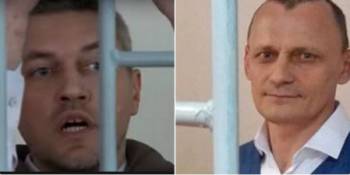 The court in Chechnya trying two Ukrainians on absurd and historically inaccurate facts has suddenly foisted ‘extra lawyers’ on the two men.  This is against the will of Mykola Karpyuk and Stanislav Klykh, was not agreed with their lawyers and comes as the trial is coming to an end.  Cheeringly, one of the lawyers thus appointed has since refused to take part after being informed of the situation by Karpyuk’s lawyer.

Ukrainian civic activists suggest that the move is aimed at discrediting the real lawyers who have, despite all the obstructions put in their way, succeeded in demonstrating the lack of any substance to the charges against the two men.  It is no small thing in today’s Russia to defend recognized political prisoners, especially those whom Russia is holding illegally as part of its undeclared war against Ukraine.  Dokka Itslayev (Karpyuk’s lawyer) and Marina Dubrovina (Klykh’s) have had the courage to properly represent their clients.  It is for this reason, Euromaidan SOS and the Ukrainian Helsinki Human Rights Union believe, that the court in Grozny (Chechnya) has forced new, state-appointed, lawyers onto the case.  There can obviously be no justification in bringing in new lawyers less than two weeks before the scheduled court debate on May 4, after which the jury’s verdict will be imminent.  In this case, the court is openly overriding the wish of the defendants themselves, and thus violating their right to defence.

Russia is claiming that the two men are Ukrainian nationalists who, as members of the organization UNA-UNSO [Ukrainian National Assembly – Ukrainian National Self-Defence] fought against the Russian army on the side of Chechen independence fighters at the end of 1994 and beginning of 1995.  The men are accused of killing 30 named Russian soldiers.

The men were held incommunicado for long periods, with Klykh only able to see a lawyer of his choice after 10 months in detention, and Karpyuk after almost a year and a half.

Both men retracted their so-called ‘confessions’ as soon as they had contact with a lawyer, and both have given detailed accounts of the torture they say was inflicted in order to obtain the testimony.

There is a crucial difference between this trial of Russia’s Ukrainian hostages and others, and it is this that is doubtless worrying the court.  If in the trials of Nadiya Savchenko, Oleg Sentsov, Oleksandr Kolchenko and others, the judges effectively cooperated with the prosecution and simply ignored alibis and other irrefutable proof of the defendants’ innocence, here a jury is considering the case.  Maximum effort has been made to manipulate the jury’s perception of the case.  This included:

the use of hired thugs to terrorize defence witnesses and try to prevent them from appearing in court and presenting compelling evidence that the men were not in Chechnya at the time of the alleged crimes.  Klykh was taking exams in Kyiv back in 1994/95, while Karpyuk was caring for his dying mother.  This can be and has been proven;

attempts to refuse to accept documentary evidence that also refutes the charges;

refusal to add the analysis carried out by the Memorial Human Rights Centre to the case material, though it is Memorial that has best documented the period in question.  This evidence is critical since, for example, Memorial has demonstrated that of the 30 men whom Karpyuk and Klykh are supposed to have killed, 18 were killed in another place altogether, while a further 11 did not die from gunshot wounds, as the prosecution claims;

the reading out of ‘confessions’ to heinous crimes which in fact never took place.  Memorial HRC has pointed to such places in the indictment which have been read out to the court despite the fact that the men are not charged with these fictitious crimes;

Judge Vakhit Ismailov’s refusal to have detailed allegations regarding the torture, which have already been sent to the European Court of Human Rights, added to the case.

This last is of critical importance since the entire case is based on the ‘confessions’, since retracted, of two men who were held without any contact with real lawyers, their family or the Ukrainian consul, as well as of a man whose testimony cannot be considered reliable.  The men still retain the scars of the torture inflicted on them, and Klykh’s extremely disturbed behaviour during court hearings before he was finally removed would only confirm his account of having been given psychotropic drugs over a long period.  Despite application for an independent psychiatric examination, Russian medical personnel found nothing wrong with Klykh, and on April 4, criminal proceedings were initiated against him for allegedly ‘insulting’ the prosecutor.

The two men also claimed that they committed these terrible ‘crimes’ together with Ukraine’s ex-Prime Minister Arseny Yatsenyuk and a number of other Ukrainian politicians.  All of this nonsense was publicly repeated as fact by the head of the Russian Investigative Committee Alexander Bastrykin.

The sloppiness in this case was quite staggering, with the prosecution clearly assuming that the men’s ‘confessions’ would never be scrutinized and not anticipating the involvement of lawyers with integrity.  It was thanks to two such lawyers that the trial is being heard before a jury.  What is planned by foisting other lawyers, however obedient, is not immediately transparent.  What is clear, however, is that the move has nothing to do with the rule of law.