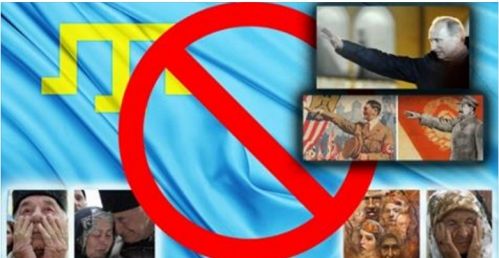 A Crimean court has formally completed its criminalization of the Mejlis, or self-governing body of the Crimean Tatar people.  There have been no serious threats of sanctions or other measures from European structures and western countries although this is a direct attack on the main indigenous people of Crimea carried out by a country which breached international law through its annexation of Ukrainian Crimea.

The banning of the Mejlis as ‘extremist’ has come in stages, with feelers doubtless out to see how the West responded.  Beyond statements of ‘concern’ or condemnation, it did not.  Russia therefore moved from vague threats to specific action, with the ‘court application’ first lodged in February. The ban was then made a fait accompli on April 13 when the de facto prosecutor Natalya Poklonskaya announced that she was ‘suspending’ the Mejlis without a court ruling.  Russia’s justice ministry then also saw no need to await a court ruling and on April 18 added the Crimean Tatar Mejlis to its list of “civic or religious organizations whose activities have been suspended due to their extremist activities.”

The Council of Europe’s disturbingly weak on a fact-finding visit to Russian-occupied Crimea did acknowledge that a court ban on the Mejlis “would indicate a new level of repression targeting the Crimean Tatar community as a whole”.

There can be no understating how serious this move is.  Oliver Loode, a member of the UN Forum on Indigenous Issues, that “if a representative body is banned, this is not just a hostile act towards a particular organization, in this case the Mejlis. It’s really an attack against the people, in this case Crimean Tatars.”  A  from the European Parliament recognized the Crimean Tatars as an indigenous people of Crimea whose right to self-government is protected under the  and the Mejlis as “the legitimate representation of the Crimean Tatar community”.

Russia through its puppet prosecutor and court called the Mejlis a ‘civic organization’ and has now banned it, claiming it to be ‘extremist’.

Nobody is in any doubt of the real reasons for this move, namely the implacable opposition of the Mejlis to Russian occupation.  Should any further confirmation be required, this was effectively provided by a chilling suggestion just made by Alexander Bastrykin, the head of Russia’s Investigative Committee.  He that the provisions outlawing what the current regime deems ‘extremism’ should be supplemented with provisions criminalizing ‘denial’ of, for example, the pseudo-referendum which Russia used in an attempt to give legitimacy of its annexation of Crimea.  The Mejlis had called on Crimean Tatars and all other Ukrainians to boycott this event.

On Monday the ‘proof’ presented to the court of the Mejlis’ ‘extremism’ was crowned by a published back in Soviet times (1988) by veteran Crimean Tatar leader and former Soviet political prisoner Mustafa Dzhemiliev.  Other material includes an extremely questionable ‘warning’ from Poklonskaya to Refat Chubarov, Head of the Mejlis against supposed ‘extremist activities”; the notification of criminal proceedings lodged against Mustafa Dzhemiliev for having tried to enter his homeland; and against Refat Chubarov, for “encroaching upon Russia’s territory”, that is, opposing Russia’s occupation of his native Crimea; the documents about the legally nihilistic charges against the Deputy Head of the Mejlis, Akhtem Chiygoz regarding a demonstration over which Russia has no jurisdiction; the Mejlis’ founding documents which also far pre-date annexation and whose ‘extremism’ is deemed to lied in their stated aim, namely the reinstatement of the Crimean Tatar people’s national and political rights as part of Ukraine.

During the ‘court debate’ on Tuesday, Nariman Dzhelyal, First Deputy Head of the Mejlis that the Mejlis is not a civic organization, but a representative assembly and also an international structure with representatives in many other countries.  The Mejlis takes part in OSCE and UN activities and is planning to open official representative offices in Brussels and Washington.

Poklonskaya demanded that the Mejlis be banned claiming, for example, that the call from one Turkish organization for the Mejlis to not be outlawed was proof that the Mejlis was an extremist organization.  Zair Smedlyaev, Qurultay [Crimean Tatar National Congress] official points out that by the same ‘logic’, the UN, Parliamentary Assembly of the Council of Europe, European Parliament and a whole range of other international bodies should be considered ‘extremist’.

As reported, it was quite unclear throughout the so-called court proceedings what exactly the prosecutor was trying to ban since there are a large number of regional mejlis which act as autonomous bodies.  While the level of knowledge of the de facto prosecutor is certainly pitiful, it is likely that the lack of clarity is quite deliberate.  Why explain who is at risk of arrest if you can leave that unknown and therefore particularly frightening?  Mustafa Dzhemiliev recently suggested that around 2, 300 people involved in all structures of Crimean Tatar self-government could be immediately at risk.

This court hearing was a farce with the outcome known from the beginning.  The only chance of averting the criminalization of a body representing the Crimean Tatar people was a real threat of punitive measures.  Aider Mudzhabayev recently that statements in defence of Crimeans facing persecution, in condemnation of repression, are undoubtedly needed, but are still useless – like trying to cure cancer with words.

Cancer spreads.  How far is Russia to be allowed to go?