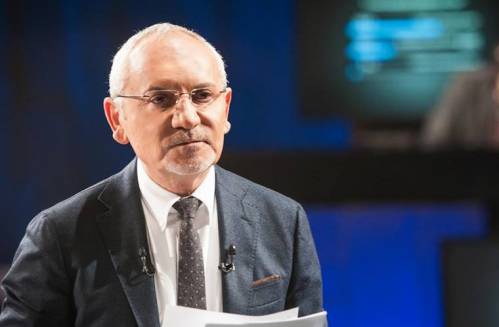 UPDATE:  It was announced on April 28 that the decision to annul Savik Shuster's work permit has been revoked.

A journalist whose flight to Ukraine from freedom of speech restraints in Russia was widely publicized 11 years ago has suddenly been denied a work permit in Ukraine, and on highly questionable grounds.  Who is behind this move is unclear, but nobody seriously believes the pretext given for the move, and that already does Ukraine’s reputation no good.

Earlier rumours that Shuster’s work permit had been annulled were confirmed on Tuesday.  Shuster has both Canadian and Italian citizenship and has never had any problem working in Ukraine before, and in fact had had the work permit renewed just two weeks ago.  The original grounds reported were that Shuster had given false information to the Kyiv Employment Centre in denying a criminal record.  This may or may not have been sloppy reporting, rather than deliberately misleading. The actual reason, it transpired, was that Shuster had not written that a criminal investigation has been initiated against him.  If the form says criminal record, Shuster would not be alone in seeing no need to mention a criminal investigation.

Shuster has now declared a hunger strike which he says he will continue until he is given a work permit.  Together with some MPs and others, he is reported to have appeared at the Kyiv Employment Centre on Tuesday afternoon to find out what was going on.  The State Employment Service asserted that this had blocked the centre’s work and stated that they had received a letter on April 22 from the State Fiscal Service informing them that a criminal case had been initiated against Shuster on Oct 5, 2015.  This, they assert, meant that Shuster had breached their procedure by not reporting the criminal investigation and that on this basis the permit had been cancelled.

The statement notes that there was nothing about the criminal investigation in the document provided by the police (needed for getting the work permit) but claims that this suggests that the Interior Ministry had not carried out its duties properly.

All of this sounds disturbingly like a pretext, and one with a chilling background since the tax check and proceedings were initiated only weeks after the head of the Fiscal Service Roman Nasirov appeared on the Shuster show and faced some hard questioning over corruption allegations.

On Sept 18, 2015, Shuster announced that he had learned that his program had been withdrawn two minutes before it was due to go on air.  He asserted that this was due to an agreement between the management of the channel (owned by oligarch Ihor Kolomoisky) and the President’s Administration.

At that time President Petro Poroshenko’s press secretary Sviatoslav Tseholko denied Shuster’s allegations and said that a proper investigation needed to be carried out.

It is not clear whether any such inquiry was held.  Certainly Shuster’s program was not returned, and he has been holding his talk show on a channel created by his studio.

The tax check carried out around this time at the Savik Shuster Studio ended with the studio facing accusations of tax evasion to the tune of 13 million UAH.  Shuster announced in January that criminal proceedings had also been brought specifically against him.  He called the proceedings politically motivated and said that in his 11 years of working in Ukraine, he had never experienced the real threat he now perceived.  He asserted that this threat was not just for them, but for the Ukrainian media.  If they start with them, he asserted, they’ll go for others as well.

On April 20, Viktoria Syumar, head of the parliamentary committee on freedom of speech announced that the committee had considered a complaint received from Shuster. The committee clearly agreed that the actions of the tax authorities seemed unwarranted and announced that they would be approaching Prime Minister Volodmyr Groysman and Verkhovna Rada Speaker Andriy Parubiy over the situation.

Syumar said that they would also be approaching the Prime Minister over the allegations regarding Nasirov, and demand that Nasirov report to the Verkhovna Rada over apparent infringement of Ukrainian legislation through pressure on an independent journalist initiative.  Obstruction of a journalist carrying out their work is, at least according to Article 171 of the Criminal Code, a criminal offence in Ukraine.

The only action to date is that from the Employment Centre confirmed on April 26, and it is hardly surprising that Dunja Mijatović, the OSCE’s Representative on Media Freedom should have issued a statement saying that the case “raises a number of concerns and questions”.  The situation is, in fact, described as “obstruction of the work of Savik Shuster, journalist, producer and host of the “Shuster Live” television show in Ukraine”.

Shuster has been running a talk show since 2005, though for different channels.  During the regime of Viktor Yanukovych, he worked for some time for UTV-1.  That state-controlled channel was regularly found one of the worst offenders for distorting and muffling information, and Shuster was also often found to have manipulated information in a way supporting the ruling Party of the Regions.

While it is now Shuster who appears to be in the firing line, the circumstances are of major concern, not least because they would indicate totally unacceptable forms of pressure on journalists.  The Prime Minister, President and Kyiv Mayor Vitaly Klichko have all made comments about the situation and the importance of freedom of speech on their Facebook pages.  Commitment to constitutionally enshrined freedom of expression is best demonstrated through rejection of any illegitimate forms of pressure.