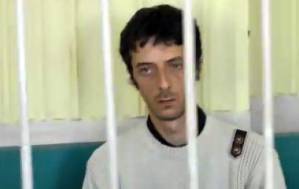 It has long been clear that Russia has no intention of releasing Khaiser Dzhemiliev, the 33-year-old son of veteran Crimean Tatar leader Mustafa Dzhemiliev.  What is new, and extremely disturbing is that the Russian authorities now appear to be foisting Russian citizenship on Khaiser against his will.

Khaiser Dzhemiliev’s lawyer Nikolai Polozov reported on April 28 that the court in Astrakhan had, as anticipated, upheld the refusal to grant parole.   Polozov writes that what is unexpected is that Khaiser is on the ex-Federal Migration Service database as a Russian national, and documents have arrived at the prison to issue him with a Russian passport.  As reported here, back in March the Ukrainian consul was prevented from seeing him.

This, unfortunately, has not so far concerned Russia at all, neither in its treatment of Mustafa Dzhemiliev and his son, nor in its annexation and imposition of a repressive regime in Crimea.

Nobody is in any doubt that Khaiser Dzhemiliev is being held hostage as a form of pressure on his father.  The world-renowned Crimean Tatar leader who spent 15 years in Soviet labour camps is an implacable opponent of Russia’s occupation of his homeland.  Russia banned him from entering Russian-occupied Crimea in April 2014.  It has now also issued an arrest warrant against him effectively for trying to enter his homeland.  Russia has not been content with repressive measures against the Crimean Tatar leader and imprisonment of his son.  On Feb 2, 2016, officials in Russian-occupied Crimea tried to take his grandson, Erol Abdulzhelilov away, supposedly just “for a talk”.

There were no grounds for refusing the extradition request and none now for rejecting the parole application.  That and these apparent attempts to strip him of his Ukrainian citizenship are now to be challenged at the European Court of Human Rights.