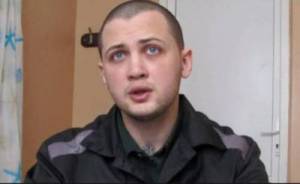 There remains no let-up in the pressure against Gennady Afanasyev, the Crimean political prisoner whose courageous retraction of testimony against Ukrainian filmmaker Oleg Sentsov and civic activist Oleksandr Kolchenko made him ‘FSB Enemy No. 1’.  According to his lawyer Oleksandr Popkov, five federal agencies, including the FSB are currently involved in putting pressure on the 25-year-old Ukrainian from Simferopol, with this including dangerous attempts to force Russian citizenship on him.  His main lifeline comes from the letters and support he receives from Ukraine (see the bottom for the address to write to).

The interview with Popkov was just after he returned from the harsh regime prison colony in the far-north Republic of Komi where Afanasyev has been held since the trial of Sentsov and Kolchenko. Popkov suspects that of all the Ukrainians Russia is now illegally holding prisoner, Afanasyev is getting the worst treatment, as a person seen as the personal enemy of the system.  This is because, under torture, he supported the version presented by the investigators and then rejected it at the crucial moment, during the actual trial of Sentsov and Kolchenko.

Popkov was probably referring to those already sentenced since there are also very grave concerns over the treatment of many Ukrainians held in Russian-occupied Crimea as well as Mykola Karpyuk and Stanislav Klykh, whose trial is coming to an end in Chechnya.

As reported earlier, there are unabated attempts to foist Russian citizenship on Afanasyev, despite the supposed initiation of extradition procedure in his case and that of Sentsov and Kolchenko.  Popkov says that there is some kind of document from the Komi Federal Migration Service which claims Afanasyev to be a Russian national.  Afanasyev has rejected all such attempts, and can be heard on the video here stating unequivocally that they are against his will.

There is also a circus underway regarding Afanasyev’s Ukrainian passport.  The Ukrainian consul was recently refused a visit with Afanasyev because the prison administration claimed that there was no proof that the young man is Ukrainian.  In fact, the file includes at very least Afanasyev’s internal – Ukrainian! – identification document.  The consul returned with a passport in Afanasyev’s name whose authenticity the Russian Foreign Ministry saw fit to doubt.  The passport was sent away for examination.  Afanasyev says that on March 25, some police officer appeared, claiming that the signature on the passport is not Afanasyev’s and demanding that he write an ‘explanation’, and give a copy of his signature, supposedly for the check.  Afanasyev wisely refused, with the officer then threatening that the passport would be ‘lost’, and he wouldn’t get another since the consul wouldn’t be allowed in to see him.

This, according to Popkov, shows how the penal service, the police and federal migration service are all working together to place pressure on Afanasyev from all sides.  He notes the terribly irony.  There are plenty of people in the Krasnodar region who have come from Central Asia or Abkhazia.  They try to prove that they are Russian nationals sometimes for decades, before the authorities up and deport them.  Afanasyev (and other Ukrainians from Crimea held illegally) have exactly the opposite problem.

The pressure on Afanasyev, Popkov is convinced, has been commissioned at federal level, and with the involvement of the FSB.

Since being brought to the Komi Republic, Afanasyev has spent 42 days in a punishment cell, and there are plans to move him to the most severe regime.  This means closed cells, with only one hour for ‘walks’ and being allowed to write for only two hours a day.  The punishments are on trumped up pretexts, or formal transgressions that all the prisoners could be, but are not, penalized for.

Although the medical care in the new prison is at least better, Popkov says that there was one suspicious incident where Afanasyev was hurt quite severely when one of the bunks was suddenly ‘dropped’ on him.  The bunk is heavy and cannot be lowered by the prisoners themselves.  Such supposed accidents are another form of pressure on the young Ukrainian, Popkov says.

As reported earlier, there was one cheering development in early March when a court in the Komi Republic accepted that holding Afanasyev in a prison 2, 700 kilometres from his family violates his rights under the European Convention.  The ruling was, unfortunately, challenged and it remains to be seen whether the judges at appeal level show the same respect for the law and human rights.

So far none of the court hearings in Afanasyev’s case, in that of Sentsov, Kolchenko and the fourth person – Oleksiy Chirniy – have had anything to do with rule of law, so optimism is not high.

It will shortly be 2 years since the four Crimeans were arrested.  They were held incommunicado for a few weeks, and then the FSB accused them of a ‘terrorist plot’ with Russian state television showing Chirniy and Afanasyev ‘confessing’.  Both received shorter – 7 year – sentences for ‘cooperating’ with the prosecution.

Sentsov in particular, but also Kolchenko, have spoken of torture since the beginning, and then Afanasyev appeared at their trial on Aug 31, 2015.  Instead of refusing to testify in court, as instructed by the FSB (to avoid questioning from the defence), but simply confirming his earlier testimony, Afanasyev took the stand, and obviously aware of the danger he was placing himself in, stated clearly that all his testimony had been given under torture and was a lie.

He was applauded by Sentsov and Kolchenko.  Then Sentsov cried out: “Glory to Ukraine!”   - “Glory to the heroes!” - Afanasyev answered’.

The renowned Memorial Human Rights Centre, which had already declared Sentsov and Kolchenko political prisoners, issued a statement adding Afanasyev and specifically warning that the young man was now in particular danger.

Oleksandr Kolchenko  (please enclose light-weight paper and an envelope, so that he can reply)

Letters for Oleksiy Chirniy can be sent to the civic initiative for political prisoners post.rosuznik[at]gmail.com, and they will send them on.  Just add his name

The letters are most likely to get through if in Russian.  If that’s not possible, write in simple English, or the following few words in Russian.

(Hello, I wish you good health, courage and patience and hope that you will soon be released.  You are not forgotten.  [The last word is like ‘hang in there’)