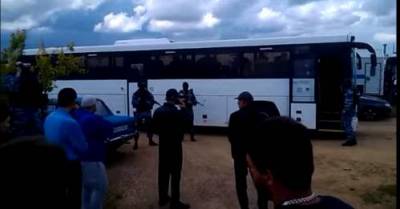 Armed and masked men cordoned off a Crimean mosque on May 6 as people were leaving after Friday prayers.  Several dozen men tried to detain about 100 Crimean Tatars and take them away in police vans for a supposed ‘check  There was outrage from those present, and eventually the armed ‘officers’ removed the cordon but ordered that all the men turn up at the police station.  Two human rights lawyers have already declared their readiness to represent any of the victims of this latest attack.

There is little more definite information, although Abdureshit Dzhepparov, coordinator of the Crimean Contact Group on Human Rights, has headed to Molodizhne in the Simferopol district where the raid was carried out.

It is difficult to know what ‘information’ there could be.  Crimean Tatars had just ended their Friday prayers and were rounded up en masse.  With no suggestion that anybody was suspected of an offence, the raid, by men with machine guns, can only be called an overt attempt to terrorize Crimean Muslims.  This is not the first such act of primitive intimidation, with at least one of the previous occasions making it quite clear that the Russian occupation regime is targeting Crimean Tatars in general.

On April 1, armed men in masks burst into a café outside Simferopol.  According to rights lawyer Emil Kurbedinov, Crimean Tatars were openly targeted, with people in the cafe “of Slavonic appearance” ignored.  All those detained were taken to the so-called Centre for Countering Extremism, and released around 4 hours later.  No charges were laid and there does not seem to have been any specific point to the questioning yet all those detained had their fingerprints and DNA samples taken. It seems likely that the same actions were planned for May 6.

Eskender Bariev, Coordinator of the Crimean Tatar Rights Committee, suggested then that the measures were aimed at preventing people from gathering in groups of more than about 5 people and was an obvious message aimed at intimidating people.

Attacks on people who have just left Friday prayers is both intimidation and part of the mounting campaign by Russia as occupying force to treat Crimean Tatars as ‘extremists’.

10 Crimean Muslims are currently in detention facing ‘terrorism’ charges for alleged involvement in an organization – Hizb ut-Tahrir – which only Russia and Uzbekistan have banned.  Four men were arrested in January 2015, and are due to go on ‘trial’ in Russia on May 18.  Four men, including human rights activist Emir-Huseyn Kuku, were arrested in February this year after mass armed raids in three areas of Crimea.  In each case, it is likely that the men have been arrested by quota, with one of the four each time not Crimean Tatar (details here: How Russia Terrorizes Children & Destroys Lives in Occupied Crimea).  Two young Crimean Tatars – Refat Alimov and Arsen Dzhepparov - have now also been arrested, with the FSB possibly hoping that they can more easily be forced into giving false testimony against the other men.

Overt intimidation of Muslims began soon after Russia invaded Crimea. Veteran Crimean Tatar leader Mustafa Dzhemiliev reported within months that the Russian FSB were openly appearing at mosques and watching people, with armed raids of religious schools and Crimean Tatar homes beginning in the late summer of 2014.

Russia has now banned the Crimean Tatar Mejlis or self-governing body with democratic countries making the right expressions of protest but not suggesting any sanctions or other measures.  Russia is therefore only escalating its terror tactics against the Crimean Tatars.  This latest attack demonstrates the danger of ignoring Aider Muzhdabayev’s impassioned appeal for reaction to the methods of terror being used against all Crimean Tatars.  They are “trying to turn them into slaves afraid of their own shadow, the sound of their own voice.  Take a step to the left, to the right and its interrogation, prison, threats, the powerlessness of adults, the terrorized eyes of children”.