What European Values if Dutch Referendum Result Stands?Appeal by the leaders of Ukrainian national communities to the Dutch populationFormer Soviet political prisoners call on Holland to say yes to Ukraine’s European futurePlaying with fear and ignoranceHow a democratic tool became a threat to democracyUkrainian Jewish leaders appeal to Holland: Give our country the chance to break with the pastDutch referendum puts Ukraine in spotlightBrexit a gift to Putin, the far right & Trump, a blow to democracyKremlin’s Donbas proxies congratulate UK for ’doing what they did’ & voting for BrexitA British Foreign Secretary who excuses Russia’s invasion of Crimea?No surprises as Trump says he could recognize Crimea as ’Russian’ & lift sanctionsMark it down, Mr Trump, Russia has already gone into UkraineFrench Collaborators Kiss Monument to Russian Invaders of CrimeaUK university denies any part in Russia’s latest Crimea propaganda stuntFrench MPs paid from Russian coffers for Crimea propaganda trip?Les collabos français embrassent le monument aux envahisseurs russes en CriméeUkraine Should Ratife The Rome Statute Of ICC — Euromaidan SOS appealTrump, Brexit, and the Myth of Ukrainian NationalismThe Russian Plot against EuropeUsing Democracy as a Weapon
• Topics / Politics and human rights 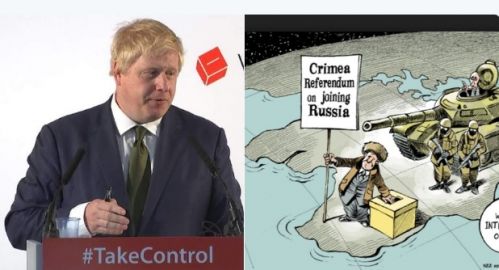 Ukraine got dragged into the ‘arguments’ presented by advocates for Britain’s exit from the European Union on Monday, in a manner both startling and depressingly reminiscent of two years of Kremlin propaganda.

According to former Mayor of London and Brexit lobbyist Boris Johnson, it was not Russia’s invasion and annexation of Crimea and its military aggression in Eastern Ukraine that had caused “real trouble”, but the EU’s actions.

After his speech on Europe, Johnson claimed that “if you want an example of EU foreign policymaking on the hoof and the EU’s pretensions to running a defence policy that have caused real trouble, then look at what has happened in Ukraine”.

Does Johnson know “what has happened in Ukraine”?  He would certainly not be the first European politician to justify Russia’s annexation of Crimea.  The Kremlin’s most prominent apologist is, of course, France’s far-right politician Marine Le Pen, but the British UKIP party leader Nigel Farrage has not been far behind in expressing support for Russian President Vladimir Putin.  Most far-right parties in Europe do in fact take Russia’s line on Ukraine, as well as on opposing the EU. It is their members, including some individuals known for their neo-Nazi views like Luc Michel and Manuel Ochsenreiter, who are regularly invited to act as ‘observers’ rubberstamping Russia’s ‘Crimean referendum’ and ‘elections’ in Donbas.

Johnson has since reacted angrily to what he calls ‘smears’, denying that he is a Putin apologist.  He might be more convincing if he explained rather more credibly what he had meant, and what, in his view, the EU had done to stoke tensions in Ukraine.

Certainly it was the fact that Viktor Yanukovych, heavily backed by the Kremlin, reneged on his pre-election promise to sign the EU-Ukraine Association Agreement that led to Euromaidan and the end of the Yanukovych regime.  Yanukovych and his cronies all fled to Russia, and Russian troops within days had seized control in Crimea.

Was he perhaps blaming the EU for thus encroaching on Russia’s ‘backyard’?  The Brexit lobbyists phrase this rather differently: they “believe that the EU’s eastwards expansion into former Warsaw Pact countries, as well as its attempts to reach economic deals with former Soviet states like Ukraine and Georgia, has provoked Russia into adopting a more aggressive military stance in areas like Crimea.”

In short, Russia was simply forced to invade and annex Ukrainian sovereign territory.  This is more or less exactly the line that the Kremlin, its far-right friends and formidable propaganda machine have been taking for the last two years and more.

Whatever Johnson’s reasons are, he is seriously distorting the facts regarding who is responsible for the worst threat to European stability and security since the Second World War.

On Feb 27, 2014, having failed the previous day to achieve an internal coup, Russia sent troops in to seize government buildings and airports in Crimea.  It then organized a illegal ‘referendum’ with no possibility of voting for the status quo. This was held 10 days later, effectively at gunpoint, with results that even Putin’s Human Rights Council has suggested were heavily falsified.

Since then Russia has carried out a policy of repression against all opponents of annexation; has severely curtailed all rights and freedoms and imprisoned people on politically motivated charges.  It has effectively declared war against the Crimean Tatars, the main indigenous people of the peninsula and is carrying out a policy of terror and intimidation.

Britain, together with Russia and the USA, was a signatory to the 1994 Budapest Memorandum which guaranteed Ukraine protection of its sovereignty and territorial integrity in exchange for giving up one of the largest nuclear arsenals in Europe.

The lack of any firm response from Britain, the USA and other western countries to that clear breach by Russia of the Memorandum and international law doubtless whetted Putin’s appetite.   In that sense, the EU is also to blame, but it seems unlikely that the lack of hard-hitting sanctions was what Johnson had in mind.

The West continued ineffectually threatening reaction for months after Russia began its military aggression in Eastern Ukraine.  There was ample evidence from the outset that Russia was providing the men and weapons for the armed seizure of areas of the Donetsk and Luhansk oblasts from April 2014.  The so-called ‘Donetsk people’s republic’ was even led for some time by Russians.  It was only after Russian or pro-Russian militants downed the Malaysian MH17 airliner on July 17, 2014, and Russian troops were deployed to prevent the Ukrainian army from regaining control in Donbas, that the West finally introduced any sanctions that bite.

Johnson spoke of NATO, not the EU, being the real ‘guarantor of peace’ in Europe and asserted that the EU should not try to encroach on its peacekeeping role.

NATO is indeed the guarantor of peace for its members if one is directly attacked.  Britons would do well to look at the attitude of people in Eastern Europe, especially the Baltic Republics.  They have experience, like Ukraine, of Russian so-called ‘hybrid warfare’ measures aimed at seriously destabilizing their countries and influencing the country’s political course.  These steer clear of the kind of military intervention that would demand NATO response, but are nonetheless hostile and extremely dangerous.

It is precisely for that reason that people in this part of the world understand the need for a united Europe, and why the Kremlin is trying so hard to undermine the EU.  Parroting Russia’s excuses for its aggression against Ukraine hardly enhances the Brexit camp’s position.

Photo of Boris Johnson from the video of his address, the cartoon is from here © Chappatte in NZZ am Sonntag, Zurich