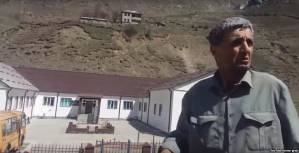 Within days, Kenkhi residents were required to attend a public meeting to deny the allegations made by Ramazan Dzhalaldinov (above).

It is no secret that just about any resident of Chechnya courageous or foolhardy enough to criticize the republican authorities, let alone republic head Ramzan Kadyrov, might risk being summarily detained and questioned and subject to orchestrated public humiliation, at best, or, at worst, disappearing without trace. But a handful of people continue to run that risk, undeterred by the possible consequences.

One such person is Ramazan Dzhalaldinov, a resident of the Avar-populated village of Kenkhi in Chechnya’s southernmost Shatoy district. Dzhalaldinov has not only complained publicly to Russian President Vladimir Putin about corruption among local officials, he lodged a formal complaint with Russian Prosecutor General Yury Chaika on May 2 requesting that he take legal action against Kadyrov for having publicly insulted him by rejecting his criticisms as lies.

In mid-April, Daghestan’s independent Russian-language weekly Chernovik uploaded to YouTube (below) a nine-minute video address by Dzhalaldinov to Putin complaining about conditions in Kenkhi. Dzhalaldinov recalls in that footage that he has tried "dozens of times, " without success, to bring the situation there to the attention of the federal authorities and to demand the creation of a special commission to investigate.

Specifically, Dzhalaldinov says that the remote mountain village, which has a population of some 1, 500, suffered serious damage during the 1999-2000 war. But residents receive the statutory compensation for that damage only if they sign an agreement to forego two-thirds of the sum due, which is pocketed by local officials. (Journalists from Chernovik had reported similar problems with compensation payments two years ago. The Avars may be a tiny minority in Chechnya, but they are the largest ethnic group in Daghestan.)

Dzhalaldinov also highlights the plight of the village’s three schools, explaining that all of the most qualified teaching personnel have quit because local officials systematically withheld their salaries.

Within days, Kenkhi residents were required to attend a public meeting to deny Dzhalaldinov’s allegations. Footage of that meeting was shown on Chechen TV. Writing on the official news portal Grozny-Inform, Chechen journalist Ibragim Estamirov claimed that Dzhalaldinov does not live permanently in Kenkhi and that he has three criminal convictions, including one in 2007 for abetting the North Caucasus insurgency.

Polonsky was constrained to leave shortly afterward after someone alerted the Chechen authorities to his presence in Kenkhi. Villagers guided him on foot by mountain paths the 22 kilometers to the border with Daghestan. He has since returned to Moscow. But the taxi driver who brought him to Kenkhi was detained on April 30 for questioning, along with two other village residents who talked to Polonsky.

Dzhalaldinov subsequently told RFE/RL’s Avar-language Radio Erkenli that his sister and brother-in-law had been offered 100, 000 rubles ($1, 508) to tell journalists that he is mentally ill, but they both refused to do so.

Kadyrov’s next move will show just how far his influence still extends beyond Chechnya’s borders into Daghestan, meaning whether he can pressure or bribe whoever is currently sheltering Dzhalaldinov to hand him over. Alternatively, Kadyrov may try to send in his heavies to snatch Dzhalaldinov, just as he reportedly personally intervened to secure the release of his sister Zulay from a Daghestan police station 11 years ago.

Any such move would, however, appear to be in blatant defiance of Putin’s warning to Kadyrov in late March that like any other citizen of the Russian Federation, he is required to obey the law.