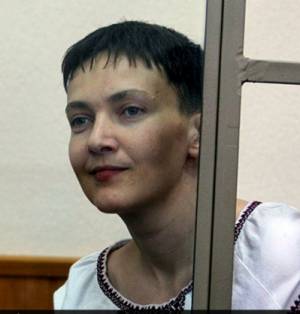 Nadiya Savchenko spent her 35th birthday alone on Wednesday, after her 78-year-old mother was refused permission to see her.  Maria Savchenko had come specially from Ukraine, but was informed that Nadiya can now only have one visit every two months, and her sister had recently visited her.  This was assuredly brutal but was to be predicted.  Savchenko’s lawyers were certainly aware of the rules on visits, and it is to be hoped that Nadiya’s elderly mother was warned that the chances of seeing her daughter were slim.

One of the lawyers defending two Russian military intelligence officers widely expected to be part of an exchange has reported that all negotiations have been suspended.  Oksana Sokolovskaya, lawyer for Yevgeny Yerofeyev told Radio Svoboda that there had been agreement on an exchange, but that there was currently no movement at all, and that she was obliged to assume that there might not be an exchange.  She is therefore likely to lodge an appeal.

It is ironical that Sokolovskaya mentions that this would be required for future appeals to the European Court of Human Rights.  Nadiya Savchenko unfortunately refused to lodge an appeal which effectively removes the possibility of applying to the Court in Strasbourg.  In her case, she would undoubtedly win any claim of illegal detention, having been abducted and taken to Russia by force.  This is internationally recognized and mentioned in the regular demands from European and international bodies and countries for her release.

Russian military servicemen Yerofeyev and Aleksandr Aleksandrov were captured after taking part in an attack on a Ukrainian military unit in the Luhansk oblast in May 2015.  They had full access from the outset to the OSCE, Red Cross, Russian consul, human rights activists and journalists.  They repeated to all of them that they were current military intelligence officers [GRU], and complained only that they were unable to contact their families. This was not, as confirmed by Russian Novaya Gazeta journalist Pavel Kanygin, because of any actions by Ukraine’s authorities, but because the numbers called were blocked or not answering.

Mark Feygin, Savchenko’s lawyer, has told Ukrinform that he has been told that Russia is demanded an unequal exchange.  He said that according to this source, whom he called “competent and informed”, Russia was insisting on a pardon for its two nationals, while insisting that Ukraine give a guarantee that Savchenko will serve the 22-year sentence passed by a Russian court and condemned by the international community.

Why Russia should insist on a pardon is not quite clear.  What is very disturbing, however, is the demand, long feared, that any extradition procedure could stall since Ukraine can clearly not promise that politically motivated sentences against Russia’s Ukrainian prisoners will be honoured.

If this is the stumbling block, then the extradition procedure made so much of in the cases of most of the prisoners are a cruel pretence.

Ukraine has formally asked for the extradition of extradition of Savchenko; Crimean prisoners Oleg Sentsov, Oleksandr Kolchenko and Gennady Afanasyev; 74-year-old Yury Soloshenko and 33-year-old Valentin Vyhivsky.   It is not clear whether Serhiy Lytvynov’s extradition has been demanded, but this is hopefully a matter of time.

The other problem applies to all the above, namely that the extradition procedure is carried out on the understanding that the person returned serves their sentence.

Nadiya Savchenko, as mentioned, was taken by force to Russia and there imprisoned and ‘tried’ with the court ignoring alibis and the sheer absurdity of the charges laid.  She was sentenced to 22 years.

Sentsov received a 20-year sentence on entirely non-existent ‘terrorism’; Oleksandr Kolchenko was sentenced on almost the same charges to 10 years; Gennady Afanasyev -  to 7 years (as was Oleksiy Chirniy, however his family did not make the relevant application enabling the extradition request).  Details here

Yury Soloshenko was deprived of a proper lawyer and then cheated into pleading guilty to ‘spying’ that he could not have committed.

The 8.5 year sentence in Serhiy Lytvynov’s case is unadulterated cynicism.

These sentences are grotesque and there is no way that a guarantee to abide by them could be given.

Birthday cards will be accepted if in envelopes, but no postcards, and they should be in Russian.

If that is a problem, the following would be fine:

Happy Birthday!  I hope you will soon be back in Ukraine where you are much missed.