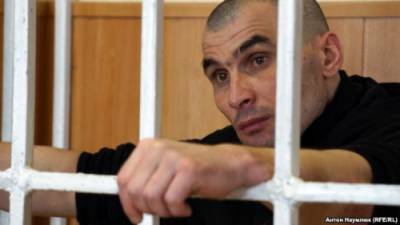 The renowned Memorial Human Rights Centre has declared Ukrainian Serhiy Lytvynov a political prisoner and demanded his immediate release.  It calls the cowherd from a Luhansk village near the border with Russia a victim of “the Russian-Ukrainian conflict”, who was used for propaganda purposes.  The 33-year-old has been held in Russian detention since August 2014 and was initially tortured to extract ‘confessions’ to fictitious war crimes.

Memorial HRC included Lytvynov on its ever-increasing list of political prisoners on May 10, two weeks after the Ukrainian was sentenced to eight and a half years on charges no less absurd than the original war crimes indictment.

Lytvynov’s lawyer Viktor Parshutkin has already lodged an appeal, and says that he will also be filing defamation suits about the media who spread lies about supposed crimes.  There is probably no chance of success in today’s Russia, but there are serious grounds for the law suits.  Back in October 2014 there were reports about Lytvynov and his supposed crimes on all national television channels.  With no suggestion that he could be innocent, the channels broadcast lurid tales of how he had murdered 39 victims, including elderly women and young girls.  All of this was false.

As reported, in August 2014, Lytvynov had an inflamed tooth that badly needed treatment. Since the clinics he would otherwise have gone to in Ukraine were under Kremlin-backed militant control, he was advised to try a hospital across the border in the Rostov region in Russia.

Since that fatal border crossing, Lytvynov has not seen his wife or 14-year-old daughter.  He was seized from the hospital and viciously tortured into signing ‘confessions’ to multiple war crimes which he was supposed to have committed as a member of the Dnipro volunteer battalion.

Lytvynov was accused of having personally carried out murders of civilians, including women and children.  The Investigative Committee even demonstrated a video with Lytvynov ‘confessing’.

Lytvynov was only later given access to a proper lawyer, and immediately explained that his ‘confessions’ had been extracted through torture.  Viktor Parshutkin succeeded in proving that the impugned war crimes had never taken place and could not have since neither the alleged victims, nor their addresses, actually existed. He has also demonstrated that his client, who has minimum education and learning difficulties, could simply not have written the ‘confessions’ that in fact he merely signed.

Lyvynov had already been in custody for almost a year and the investigators clearly decided that it would not go down well, given the Investigative Committee’s high-profile claims, to release him.  They came up with a new story, which Memorial HRC has analysed and found lacking in any credibility.

Most of the problems with the story have already been mentioned here.  There is no record of Lysenko having entered Ukraine via a part of the border still under Ukrainian control.

The two cars mentioned did exist, although one had long been effectively scrap metal by the time Lytvynov was supposed to stolen it.  Neither car was owned by Lysenko.  Lysenko had not only failed to report ‘the crime’, but had not sought medical help after the alleged ‘attack’ on him.

Memorial analyses every part of this story and finds it all highly improbable.

It also addresses the original war crimes charges.  Even if one is charitable and assumes that the Investigative Committee was ‘misled’ by Lytvynov’s ‘confessions’, they did not carry out the checks which would have told them that not only the people were the figment of somebody’s imagination, but even the streets on which they were supposed to have lived.

The concocted nature of both the original charges and those used as a substitute were clear to everybody.  This did not stop the Russian prosecutor from demanding 9 years and then, on April 20, Judge Svetlana Shapavalova from the Tarasovka District Court (Rostov oblast) from sentencing Lytvynov to eight and a half years maximum security imprisonment.