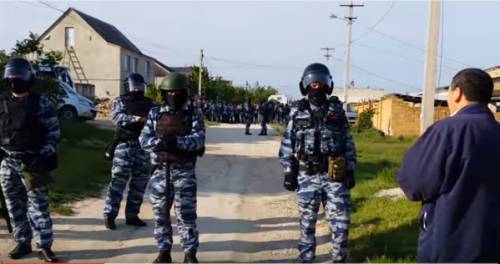 Four more Crimean Tatars have been arrested and could face long terms of imprisonment on trumped-up ‘terrorism’ charges following the latest offensive in Russian-occupied Crimea. Dozens of armed and masked men arrived at Muslim homes and at the Crimean Tatar restaurant Karavan Sarai ‘Salachik’ in Bakhchysarai on Thursday morning, May 12, carrying out searches and arresting four men.  All four are Crimean Tatar:

Enver Mamutov, who is accused of ‘organizing terrorist activities’ is a businessman with seven children.  He is well-known in Bakhchysarai for his civic activities and for organizing two major religious festivals. Dentist Zevri Abseitov and builder Rustem Abiltarov each has four children.  Remzi Memetov is a cook in the restaurant where a search was also carried out on Thursday.  They are all alleged to have ‘taken part in terrorist activities’.  All four men are clearly practising Muslims who have been on pilgrimage to Mecca, and all are now the latest under Russian occupation to be labelled ‘terrorists’. 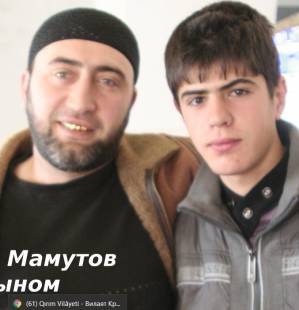 Enver Mamutov with one of his sons

These new arrests have coincided with the blocking in Crimea of the Radio Liberty Crimean Service Krym.Realii, a vital source of information about the ever-increasing rights violations under Russian occupation.

Natalya Poklonskaya, installed as prosecutor after Russia seized power in Crimea, clearly prefers a Soviet-style monopoly on information sources.  Her account of the arrests to the TASS information agency carries chilling echoes from Stalinist times.

As usual, Poklonskaya demonstrates contempt for such fundamental elements of law as the presumption of innocence and claims that “the organizer and three members of a terrorist cells have been detained”.

The so-called ‘terrorist organization’ in question is Hizb ut-Tahrir, a pan-Islamic movement, which is legal in Ukraine and most countries.  Russia’s Supreme Court declared it ‘terrorist’ without providing any grounds.  Vitaly Ponomaryov from the Memorial Human Rights Centre believes that the decision may have been taken to facilitate extradition of Uzbek Muslims to Uzbekistan where they faced religious persecution and certain torture.  Memorial considers all those imprisoned merely for membership of Hizb ut-Tahrir to be political prisoners (more details here Russia’s Invented ‘Terrorism’ and its Crimean Muslim Victims )

These terror tactics are now in full swing in Russian-occupied Crimea.  Typically, Poklonskaya also “particularly noted the friendly links between the terrorist organization and the Mejlis of the Crimean Tatar people [which she wrongly calls a civic movement]. “Members of Hizb ut-Tahrir have openly expressed gratitude in the media to the Mejlis for speaking in support of them”, she asserted.

The tactics are grubby and manipulative.  According to veteran Crimean Tatar leader and former Head of the Mejlis Mustafa Dzhemiliev, Hizb ut-Tahrir was rather tolerated, than approved of.  Dzhemiliev does not especially like the organization which he says divides Muslims into the ‘right’ and ‘wrong’ kind.  Its adherents are, however, neither extremist nor terrorist.  Nor is the Mejlis, which Russia has now also criminalized.

It should be stressed that all arrests have been made on the basis of alleged membership.  Courts are regularly sentencing Muslims in Russia to long sentences after just one secret ‘witness’ claims that the person accused had tried to ‘recruit’ him.

Such ‘terrorism’ cases will probably bring promotion to the FSB investigators involved, and for minimum effort since neither prosecutor nor court ever seems to ask any questions, and the trials are behind closed doors.  They are already resulting in sentences of 10 years and longer, and there are new legislative initiatives in Russia which would significantly increase these.

The use of such trumped up terrorism charges on the basis of supposed membership of Hizb ut-Tahrir began in Occupied Crimea in January 2015, with the arrest of the first four Crimean Muslims - Nuri Primov; Ferat Saifullayev; Rustem Vaitov; and Ruslan Zeitullayev.  They are shortly to go on trial in Russia.

Four men, including human rights activist Emir-Huseyn Kuku, were arrested in February this year after mass armed raids in different parts of Crimea. Kuku, a member of the Crimean Contact Group on Human Rights, had long been facing persecution under Russian occupation, but on quite different charges.

In February Kuku was arrested, together with Muslim Aliev, Envir Bekirov and Vadim Siruk.  Both of the four lots of arrests looked suspiciously as though by quota, with each including one man who is Muslim but not Crimean Tatar.  If this was done to counter the warranted accusations that Crimean Tatars are being targeted, it would appear that Russia has quite pretending.

There are now four more victims, with no reason to believe that this is the end.

Videos of the searches on May 12 here: