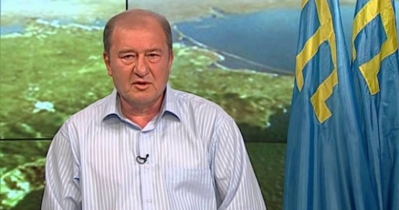 Ilmi Umerov, the Deputy Head of the Mejlis, or Crimean Tatar representative assembly, was detained on May 12 in Russian-occupied Crimea on charges of ‘making public calls encroaching upon Russia’s territorial integrity’.  The criminal proceedings come just over two weeks after the Mejlis, which is the self-governing body of the largest indigenous people of Crimea,  was banned as ‘extremist’.

The charges against Umerov clearly identify what Russia understands as ‘extremism’, namely opposition to Russia’s occupation of Crimea. The official ‘Rossiyskaya gazeta” spells this out, reporting that Umerov is accused of “openly calling for the return of Crimea to Ukraine”.  Since there is no suggestion, nor could there be, that Umerov had proposed to use violent means to achieve such a return, this is a charge that can be laid against any member of the Mejlis, most Crimean Tatars and many other Crimeans as well.  Or, of course, against the leaders of all democratic countries, European and international bodies.

The charges announced by de facto Crimean prosecutor Natalya Poklonskaya on Thursday afternoon fall under Article 280.1 § 2 of the Russian Criminal Code, with the so-called ‘public calls aimed at violating Russia’s territorial integrity’ being circulated via the Internet.  They carry a sentence of up to 5 years’ imprisonment.

Article 280.1 came into force in May 2014, three months after Russia’s invasion and annexation of Crimea.  Fears were expressed at the time that the new charges could be used against critics of Russia’s occupation of Ukrainian territory, and this is precisely what has happened.  Russian bloggers such as the Tatar activist Rafis Kashapov and Andrei Bubeyev have received long sentences simply for reposting or posting material on social networks opposing Russia’s annexation.

In May 2015, after exiling the Head of the Mejlis Refat Chubarov from his homeland, Russia initiated criminal proceedings against him for “encroaching on Russia’s territorial integrity” by insisting that Crimea is Ukraine, and in October even issued an arrest warrant against him.  This all seemed grotesquely absurd, and indeed Chubarov initially quipped that German Chancellor Angela Merkel, who had also been vocal in calling for Russia to stop occupying Ukrainian territory, should beware.

The situation is now dead serious with Umerov the second Crimean Tatar leader facing criminal charges.  58-year-old Umerov is in ill-health, and later on Thursday evening he was released on a signed undertaking not to leave the city.  A search was carried out of his home, though nothing was taken away.

The occupation authorities have been holding Aktem Chiygoz, Deputy Head of the Mejlis, in custody since Jan 29.  The charges against him are grotesquely lawless.  They pertain to a pre-annexation demonstration over which Russia has no jurisdiction, and present charges which all video and witness testimony refute.

This second arrest on preposterous charges comes a day after Crimean Tatar leaders met with the new Russian – police major general – rights ombudsperson Tatyana Moskalkova.  In one of her first interviews after being elected to what is, for her, a startlingly novel role, Moskalkova claimed that there were no political prisoners in Russia, just ‘extremists’.

Ilmi Umerov is described by Sevhil Musayeva-Borovik, Chief Editor of Ukrainska Pravda and herself Crimean Tatar, as “an example of the courage of the small, yet proud Crimean Tatar people.”  He was born in exile, in Uzbekistan 57 years ago, and was one of the first Crimean Tatars to return to his homeland in 1989.

He was among the first Crimean Tatars to return in 1989, at the age of 31.  The young doctor found a job in a hospital, but was dismissed after the Head Doctor learned that he was a Crimean Tatar.  The man called him ‘an extremist’.

27 years later, under Russian occupation, the word is once again being used.

As well as holding high position in the Mejlis, Umerov also headed the Bakhchysarai Regional Administration from 2005 to 2014.  He has often been cited here, and has never concealed his opposition to Russian occupation.

That was doubtless one of the reasons why Musayeva-Borovik had been worried about him for many months now.  She saw him during a visit to Kyiv and told him how worried she was.  “Ilmi smiled at that and answered: “it’s we who are concerned for you here. There’s no reason to worry for us, we are in our homeland”.

In Russian-occupied Crimea the plan appears to be to force those who consider, as does the UN, EU and all democratic countries that Crimea is Ukrainian and illegally occupied by Russia into exile or forced silence.  The Mejlis leaders are in their homeland and have no intention of leaving it.  One of the most cynical methods that Russia is now resorting to must surely be to imprison and / or prosecute Crimean Tatars living on their own Ukrainian Crimean land on charges of ‘encroaching on Russia’s territory’.