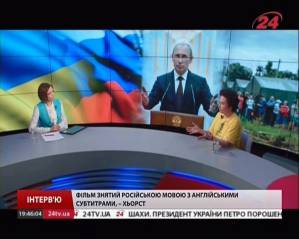 Tonight’s Eurovision is not just a light-hearted singing contest. It is one of the only chances the Crimean Tatars have to tell the world about Russia’s continuing efforts to wipe out all traces of them. It wasn’t enough that Stalin deported the Crimean Tatars en masse in 1944. In 2014 Russia banned Crimean Tatar leader Mustafa Dzhemilev from Crimea and embarked on a campaign to murder, torture, imprison and imprison anyone who spoke out for Crimean Tatars. Crimean Tatar TV station ATR was raided and forced to relocate to Kiev. The Mejlis of the Crimean Tatars has been closed down. Radio Svoboda’s Krym.Realii website has been blocked.

When I was working for BBC Monitoring in 2014 my boss, who was Iranian and didn’t speak Russian, got angry at me for writing a headline "Russia accuses Crimean Tatars of extremism". He didn’t like me using the word "accuses", as it cast doubt on Russia’s story that a weapon and extremist literature had been found at the Mejlis. He wanted me to translate the Russian statement that just said that the items had been found, which would have conveyed to readers that Crimean Tatars are dangerous extremists.

Another day he got angry at me because he’d had a complaint from the BBC’s Russian employees in Moscow that I had translated a Grani.ru (blocked in Russia) article about arrests of Crimean Tatars for protesting against the occupation. He said that we were not supposed to translate Grani.ru articles - this was a source ostensibly covered by our American partners, although in fact they hardly ever translated anything from Grani.ru. My team leader that day had authorised me to do the translation.

Eventually the BBC found it easier just to let me go at the end of my contract rather than deal with complaints from Moscow about stories on the Crimean Tatars. Thankfully, though, we have Jamala | Джамала and her fantastic song tonight. Vote for Jamala!