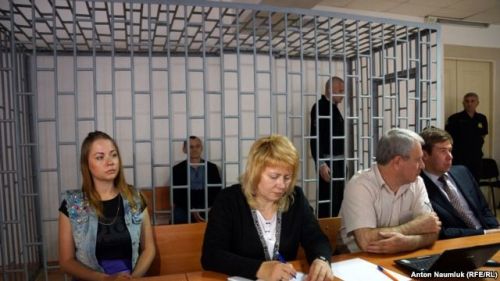 The verdict is imminent in the trial of Mykola Karpyuk and Stanislav Klykh, two Ukrainians whom Russia has accused of killing Russian soldiers during the war in Chechnya in 1994-1994.  If ‘confessions’ extracted through torture, evidence of alibis and of glaring historical inaccuracies have become standard in Russia’s trials of imprisoned Ukrainians, on this occasion there is one crucial difference.

This is the only time that a jury is to pass verdict.  It is almost certainly for this reason that presiding judge Vakhit Ismailov has blocked evidence from the Memorial Human Rights Centre which totally demolishes the indictment and from Ukraine proving that the men were in Ukraine at the time in question.  There have also been attempts to prevent defence witnesses from speaking in court, with the efforts to drive out such witnesses and journalists backed by thugs believed to be working for Chechen leader Ramzan Kadyrov.

The court debate took place first on May 17, with prosecutor Salambek Yunusov claiming that the men’s guilt had been proved and asking for “the correct decision to be taken”.  Another prosecutor Sergei Blinnikov read out parts of Karpyuk’s ‘confessions’, extracted during the 18 months that Karpyuk was held totally incommunicado and without access to a real lawyer.  As soon as such a lawyer appeared, Karpyuk retracted all this testimony, saying that he had given it under torture.  The only difference in Klykh’s case is that he was held incommunicado for ‘only’ 10 months.  Most men bear scars which confirm their account of torture, and applications over both the torture and the refusal to investigate the allegations are with the European Court of Human Rights.

In a statement from Feb 17, 2016, Memorial HRC declared both men political prisoners.  It pointed out that its four-part analysis had demonstrated that the indictment contains fictitious crimes, a huge number of factual mistakes and is almost totally based on testimony which the men have retracted.  It notes that some of the lurid confessions are to heinous crimes which simply never happened.  The prosecution has left the confessions in the indictment, but not charged the men.  Memorial believes that this is so that monstrous details of non-existent crimes can have an emotional impact on the jury which the defence will be powerless to fight.

The factual mistakes are by no means minor.

There is no historical evidence to back the tales of torture and extrajudicial executions presented by the prosecution.  The investigators had not provided any information as to bodies found with marks of torture, or of the identity of the victims.

The investigators clearly made no attempt to examine the historical material, instead relying on ‘confessions’.  The whole case is based on those retracted by Karpyuk and Klykh, and on the testimony of Oleksandr Malofeyev.  The latter is a Ukrainian national who had long lived in Russia.  He was serving a 23-year sentence for crimes in which two people were killed.  He is also an HIV positive drug addict with hepatitis B, C and tuberculosis, making it extremely easy to put pressure on him by threatening to withdraw his treatment

Memorial has slammed much of Malofeyev’s accounts of battles.  Cherkasov pointed out in court that there had been no Russian units in the place Malofeyev claimed, and the street on which he asserted that they had tortured captured Russian soldiers in February 1995 had at that time been far into the rear of the Russian forces.

The judge constantly tried to interrupt Cherkasov’s account, as being ‘journeys through history’.

Further documentary evidence has recently been provided to the court proving that Malofeyev was being sentenced for crimes in Crimea at the time that he was supposed to have been fighting in Chechnya.  That evidence was dismissed by the prosecutor on Tuesday as ‘fabricated’.

The defence believes that Malofeyev was never in Chechnya at all.

Both men have now given their final address to the court.  In both cases it was close to their only appearance.  Karpyuk was removed from the court almost from the outset for ‘disrespect’ to the court.  Klykh’s lawyer Marina Dubrovina had expressed concern about her client’s mental state from the outset and in January this year his behaviour seemed very seriously disturbed.  It is extremely likely that this is connected with the psychotropic drugs that he has constantly asserted were applied by force.  He was only examined by Russian medics, who typically found nothing wrong.  It is known that he has since been forced to take other medication with no indication of what this is for.

Anton Naumlyuk, a civic activist who has been following the trial, was in court on Tuesday.  He writes that in his speech, Klykh stressed that he had never set foot in Chechnya before nor had he ever taken part in any military action.

Karpyuk told the court that he is not on trial for events from 20 years ago, as alleged by the prosecution, but because he is Ukrainian and because of what Russia has done to his motherland.  He spoke of the torture he had been subjected to, and said that they had threatened to do the same to his small son.  He expressed his gratitude to all the Ukrainians who have supported him.

The court resumes on Wednesday with the jury able to ask questions.