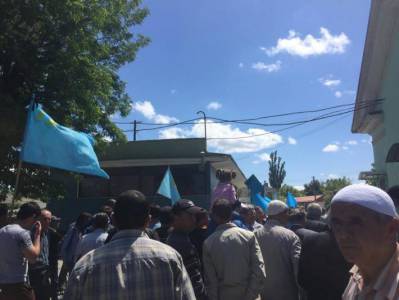 How is it possible to prohibit a people from honouring the victims of an act of genocide?  With threats, detentions and even warnings to schools that the number of children absent will be noted, and their parents asked for explanations.  The ban did not stop a large number of Crimean Tatars gathering in Bakhchysarai, with the FSB out in full force and openly videoing all those present.

Crimean Tatars in about 20 cars did set off, after the prayers and minute’s silence, for what before Russia’s annexation, was a traditional car rally from Simferopol to Bakhchysarai.  Around half of them were detained in Bakhchysarai with the police claiming this to be an ‘unauthorized gathering’ and taking their driving licences away.  Once again, all participants were videoed. 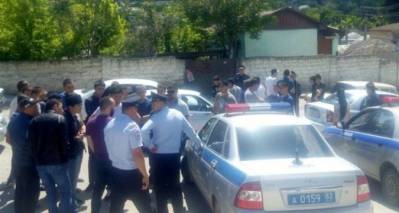 All members of the now-banned Crimean Tatar Mejlis or representative assembly, and probably others, received ‘warnings’ on the eve of the anniversary on May 18.  Ilmi Umerov, Deputy Head of the Mejlis who is now facing criminal charges effectively for opposing Russia’s occupation of Crimea, received a visitation on the morning of May 17.  The warning called him the “organizer of a public mass event”.  He pointed out that neither taking part in the Minute’s Silence (throughout Ukraine) nor taking part in prayers in honour of the victims constituting such a ‘public event’ and he, “of course refused to sign the WARNING”.

Children were also not exempt.  Schools were sent a notice informing them that “May 18 is an ordinary school day” and that by 9 a.m. all schools were to email information about any school children who were absent, with “children of Crimean Tatar nationality given separately”.   There is no official confirmation of this, but then official statements would not be expected.  Refat Chubarov, banished Head of the Mejlis reports that the intimidation of parents on May 18 was in marked contrast to the attempts by the occupation authorities to come up with numbers and good photos for the Hyderlez Spring Festival on May 3.  Then, the fact that this was a normal school day meant nothing, and schools were positively obliged to bring children out.  The de facto authorities effectively hijacked Hyderlez in 2015, although their efforts both then and in 2016 to achieve a Soviet-style ‘festival’ proving how happily minorities live under Russian occupation were largely a flop.

Nariman Dzhelyal, First Deputy Head of the Mejlis, later noted that children in one Crimean village had been taken to the victory memorial on May 9 [Victory Day].  “On May 18, schoolchildren were prohibited from going to the memorial stone several metres from that place.  For reasons of security…”

Dzhelyal points out also that around 20 coaches were laid on in Mazanka (Simferopol region) to take public sector workers to provide the people at ‘official remembrance ceremonies”.

The Mejlis, which had always organized the Hyderlez Spring Festival, was forced to cancel it first on May 2, 2014 when it was learned that veteran Crimean Tatar leader who spent most of his life, including 15 years in Soviet labour camps, defending the right of the Crimean Tatar people to live in their homeland had been banned from Crimea.   Refat Chubarov has now also been banned, the First Deputy Head of the Mejlis Akhtem Chiygoz is in prison, and the Mejlis itself criminalized.

The number of arrests now is mounting, and the so-called prosecutor Natalya Poklonskaya saw fit on the eve of the anniversary to threaten even worse measures against what she calls ‘radicals’ and ‘extremists’.

More than 180 thousand Crimean Tatars were forcibly deported over a few days following May 18, 1944.  Families were given minutes to prepare for the journey, with the NKVD operation carried out with enormous brutality.  It is believed that over 46% of the Crimean Tatar people died during the journey or during the first year in absolutely inhuman conditions.

This can be no ‘ordinary school day’ and it is no wonder that Crimean Tatars have been gathering as called to remember together and pray for the Victims.  In Bakhchysarai, dozens or even hundreds of Crimean Tatars gathered near the memorial plaque at the railway station.  There was quite deafening noise as drivers there, and seemingly throughout Crimea, heeded the Mejlis’s call on people after the Minute’s Silence to sound their car horns, and the crowd kept growing (see the video). The fact that there were no arrests immediately means little.  According to Russia’s repressive laws, this was an ‘unauthorized meeting’ and as mentioned, the FSB were there videoing everybody.  The same applies to all the participants in the attempted car rally.  Under Russian occupation it is likely that anybody following the Mejlis’ call for remembrance will be in danger.