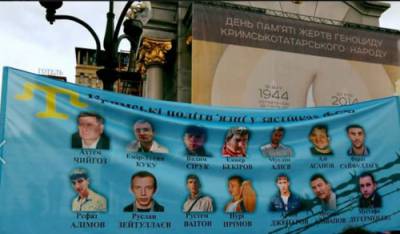 The trial has begun of four Crimean Muslims accused by Russia of involvement in an organization – Hizb ut-Tahrir - which is legal in Ukraine but which Russia and Uzbekistan have declared ‘terrorist’ without providing any reason.  The ‘court’ on Wednesday also saw no need for the defence to be shown any proof.

The timing for the preliminary hearing could not have been more telling.  The occupation authorities had taken all measures, from threats to a ban on all remembrance gatherings, to prevent Crimean Tatars from attending remembrance gatherings in honour of the victims of the 1944 Deportation.  Aside from official flower-laying, it was ‘business as usual’, with the business including a court hearing with the now standard extension of all defendants’ detention until October, and rejection of every application lodged by the defence.

The preliminary hearing was still in Simferopol however the four defendants: Ruslan Zeitullayev; Rustem Vaitov; Nuri Primov and Ferat Saifullayev were not brought to the courtroom, and spoke via a video link with the SIZO or remand prison. The exercise bore all the hallmarks of a formality, and the prosecutor apparently did not even bother to attend.

Emil Kurbedinov, who was unlawfully prevented from representing three of the four men reported that all applications had been rejected, including the request to be shown the evidence which the lawyers clearly need to defend their clients.

If there is any proof

There are grounds for believing that at least one of the defendants in this case who is from a mixed family, as well as one of the four men arrested in Feb 2016, who is not Crimean Tatar were arrested effectively ‘by quota’, so that Russia could point to them in trying to deny that it is targeting Crimean Tatars.

Ruslan Zeitullayev; Nuri Primov and Rustem Vaitov have been in custody since January 2015; Ferat Saifullayev since the beginning of April.  All are charged under Article 205 § 5 of the Russian Criminal Code (organizing / participating in a terrorist organization).  29-year-old Zeitullayev, the father of 3 small children, is accused of organizing a so-called terrorist organization, and could face a 15-year sentence, the others up to 10 years.

There does not appear to be any real proof even that they are members of Hizb ut-Tahrir, and none of the men is facing charges alleging specific unlawful behaviour.

Kurbedinov writes that since he and colleagues first became involved in such cases, they have been unable to find any objective and reliable evidence of Hizb ut-Tahrir’s alleged ‘terrorist activities’.

It was banned in 2003 as terrorist by the Russian Supreme Court in a hearing so secret that human rights organizations only learned of it a year later, long after the period for appealing against it had elapsed.  There is also as good as no explanation given, with the half-page saying only that organization calls for the creation of Khalifat, carries out active propaganda, and is banned in Uzbekistan and some Arab countries.  It is legal in Ukraine and in most countries.

The situation in Crimea under Russian occupation is particularly disturbing.  There is every indication that the mass armed searches and arrests are aimed at both terrorizing the Crimean Tatars and creating the image of Crimean Muslims as dangerous ‘terrorists’.  This in turn is probably in order to justify even worse repression or a bloody crackdown.   Fourteen men are now in custody, all but two Crimean Tatar.  They include Emir-Huseyn Kuku, a well-known human rights activist who had faced harassment from the occupation authorities on different pretexts earlier, and two very young men.  Once arrested, it is effectively guaranteed that the ‘court’ will automatically extend the detention despite the fact that most of the men have young families and that no evidence is provided.  Rather than explaining why the men are in custody, there have simply been attempts to strip the men of their right to defence by a lawyer they trust and to intimidate others to stop them attending the court hearings.

So far Russia and its puppets have miscalculated, however not one of the men has been released, and the situation is critical.  For officials without scruples, the cases are almost fool-proof and guarantee promotion for no-questions-asked ‘terrorism’ convictions.  The numbers will continue to increase unless the questions start being asked, and Russia held to answer.