Russia’s “most monstrously falsified trial” of Ukrainians ends as commissioned 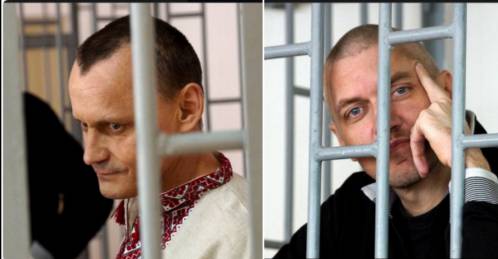 Sentence is now due after a jury in Grozny, Chechnya on May 19 found two Ukrainians Mykola Karpyuk and Stanislav Klykh guilty of fighting against Russian forces in Chechnya in 1994/95 and killing 31 soldiers.  Russian human rights defenders had already declared both men political prisoners and Zoya Svetova, a prominent rights activist, has called the case “one of the most insane and monstrously falsified prosecutions initiated against Ukrainian nationals since the annexation of Crimea”.  It is thus profoundly disappointing that a jury should have ignored the documentary evidence from the Memorial Human Rights Centre which demolished the entire indictment and clear evidence that the men had never been in Chechnya, and had given ‘confessions’ under torture.

In a blistering article written after the verdict was announced, Svetova writes that there had been “an unequivocal order to arrest Ukrainian nationalists” who were to describe alleged crimes committed by the then Ukrainian prime minister Arseny Yatsenyuk, the leader of the national Right Sector Dmytro Yarosh, and other high-ranking Ukrainians.  “And this was done”.

The task was achieved via torture and through a court that systematically refused to add evidence to the case, including the four-part analysis produced by the Memorial Human Rights Centre.  This demolished the indictment and left no doubt about the methods that had been used to extract insane ‘confessions’ to heinous crimes supposedly committed together with Yatsenyuk & Co.   The methods included threats to apply the same torture to Karpyuk’s wife and small child.  Since he had effectively been abducted, it was no surprise that he should have believed this possible.

The jury is known to have been placed under considerable pressure, and the court under presiding judge Vakhit Ismailov had also consistently refused to allow evidence which proved the men’s story.  This included the four parts of a comprehensive analysis carried out by the Memorial Human Rights Centre.  It was on the basis of this devastating assessment of the charges that in February 2016 Memorial declared both men political prisoners.

Russia claims that 42-year-old Klykh and Karpyuk (53) took part in fighting in Chechnya 20 years ago and that during battles in Dec 1994 and Jan 1995 they killed a number of Russian soldiers.   Karpyuk was accused of creating and leading a band called ‘Viking’, made up of members of.  Klykh was charged with taking part in it.

In its analysis, Memorial HRC demonstrated that the indictment contained fictitious crimes, a huge number of factual mistakes and was almost totally based on testimony which the men had retracted.  Some of the lurid confessions were too heinous crimes which had simply never happened.  Memorial’s warning that the confessions had been left in the indictment to enable the prosecutor to read them out and influence the jury was clearly to be taken seriously.

The factual mistakes were not on mere details.

Memorial, which has been monitoring the Chechnya conflict for over two decades, pointed to numerous errors and noted the generally shoddy work done by the investigators.  They had clearly felt that no questions would be asked, and indeed, while the men were held without access to proper lawyers, this was the case.

The case was based solely on the testimony from Karpyuk and Klykh and on that of a Ukrainian national Oleksandr Malofeyev.

Both Karpyuk and Klykh, however, immediately retracted their stories as soon as they received proper lawyers.  They gave graphic details of the torture they had been subjected to, with this now part of both men’s applications to the European Court of Human Rights.

The testimony of Oleksandr Malofeyev is no more reliable.  The latter, although a Ukrainian national, had long lived in Russia.  He was serving a 23-year sentence for crimes in which two people were killed, and the extra sentence of 24 years for crimes he could not have committed makes little difference to his situation. He is also an HIV positive drug addict with hepatitis B, C and tuberculosis, making it extremely easy to put pressure on him by threatening to withdraw his treatment

Memorial has slammed much of Malofeyev’s accounts of battles.  Cherkasov pointed out in court that there had been no Russian units in the place Malofeyev claimed, and the street on which he asserted that they had tortured captured Russian soldiers in February 1995 had at that time been far into the rear of the Russian forces. The judge constantly tried to interrupt Cherkasov’s account, as being ‘journeys through history’.  The documentary evidence provided from Ukraine, showing that Malofeyev was on trial for serious offences in Crimea at the time he claimed to have been in Chechnya was dismissed by the prosecutor as ‘fabricated’.

Klykh and Karpyuk are among the “Ukrainians unjustly held in Russia and Russian-occupied Crimea” whose release was recently demanded by the US mission to the OSCE and is required by the Minsk Agreement.

It is Mykola Karpyuk’s birthday on May 21.  Please write to him and to Stanislav Klykh.  Show them – and the Kremlin – that they are not forgotten!

The letters need to be in Russian to get through.  If this is a problem, the following birthday greetings would be fine

(Happy Birthday!  I wish you good health and patience and hope that you will soon be back home, in Ukraine, where you are much missed!)

Or the simple message:

Or send your letters to post.rosuznik[at]gmail.com  a civic initiative helping to get mail to Russian-held political prisoners  They will deal with writing the envelope and sending it on. .