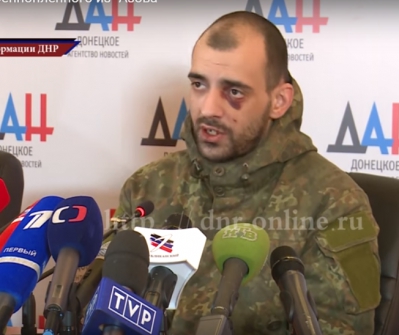 A Ukrainian volunteer fighter from Makiyivka who is on Ukraine’s list for exchange has been ‘sentenced’ to 30 years in the so-called ‘Donetsk people’s republic’ [DNR].  The Kremlin-backed militants have ‘convicted’ Yevhen Chudnetsov of “an attempt to violently seize power on the republic’s territory”.  This comes around 14 months after Chudnetsov was captured and tortured into ‘confessing’ for Russian television.

The official agency DAN states that the DNR ‘Supreme Court’ has sentenced Chudnetsov who is described as a fighter from the Azov Battalion, and reports this as a fresh announcement just received from the so-called court.  Chudnetsov is alleged to have aimed at violently seizing power and changing by force the “constitutional order of the Donetsk people’s republic”.  He is supposed to have taken direct part in battles with the militants in the Novoyazovsk district and in suburbs of Mariupol.

Since the same ’30-year sentence’, together with threats of applying the ‘death penalty’, were reported a few months ago, it is possible that this ‘sentence’ has been dredged up now to heighten the stakes in negotiations over an exchange or over the Minsk accords in general.

In February the so-called DNR ‘ombudsperson’ Darya Morozova spoke of Chudnetsov in an interview for Novaya Gazeta where she claimed that the DNR was not holding anybody illegally.  All those in custody, she asserted, were “under investigation” for suspected ‘crimes’.

Such ‘suspects’ include the renowned religious specialist Ihor Kozlovsky, who was taken prisoner by DNR militants on January 26, and remains in custody.

In fact, Morozova was asked then to comment on the 30-year ‘sentence’ passed on Chudnetsov, so what this latest ‘Supreme Court’ ruling is remains unclear.  It was not called an appeal hearing, and an appeal seems unlikely given that Chudnetsov was not given a lawyer.  There is no indication of the length of the hearing on May 19, but Novaya Gazeta reported back in early February that Chudnetsov’s relatives had missed the trial because it began half an hour earlier than scheduled.  Half an hour was then clearly enough for the militants to ‘try’ Chudnetsov and ‘sentence’ him to 30 years.

Back then there was no more information about either the so-called trial or the actual charges.  There is not much more clarity now.

There is, however,  a video which was widely shown on all Russian propaganda channels.  In it, Chudnetsov looks obviously as if he has been beaten, and has had around half his teeth knocked out.  The torture he was almost certainly subjected to is not mentioned.  Instead, it is claimed that he surrendered and then at this press conference voluntarily provides ‘information’ about the foreigners supposedly instructing Azov – from Georgia, Sweden and the USA or fighting as mercenaries, and the foreign weapons purportedly used.

Under the Minsk Agreement which neither the Kremlin, nor its proxies in Donbas show any intention of honouring, the sides agree to an exchange of all prisoners on an all for all basis.   Chudnetsov clearly falls within this category.