Alarm bells ring as chief Maidan crimes investigator threatened with criminal chargesFirst prison sentence for crimes against Euromaidan activistsUkraine’s only trial over Maidan killings under threatPolice & judges accused of impeding prosecution of crimes against Euromaidan activistsAnother person charged with Euromaidan crimes allowed to escape?Ex-Security Service chief in custody over Euromaidan killingsSo who doesn’t want justice for Euromaidan victims?High-ranking Berkut officer charged over Euromaidan killingsEuromaidan: A Year of Impunity and what went wrongEx-Berkut officer on trial over AutoMaidan ambushEx-Berkut officers arrested on suspicion of involvement in Maidan killingsWhere are 13 mysterious Berkut sniper suspects?Who (hasn’t) answered for crimes against Maidan?Maidan killings suspect missing after being released from custodyTwelve detained on suspicion of involvement in the gunning down of Maidan protesters (updated)Blood and Berkut Sniper Bullets on the President’s HandsMustafa Dzhemiliev on Maidan: I’m proud of you, dear fellow UkrainiansBerkut snipers aimed at protestersWaiting for more bloodshed?Open threats and covert plans as ‘hostage law’ deadline nears
• Topics / Law enforcement agencies 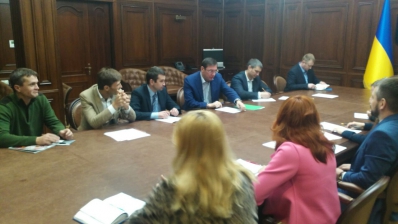 Newly-appointed Prosecutor General Yury Lutsenko has held a meeting with lawyers representing victims of crimes against Euromaidan.  While it is definitely early days, the lawyers are obviously pleased at the moves Lutsenko has announced which may help to remove the sources of sabotage from within the Prosecutor General’s Office [PGO].

Lutsenko has himself reported that he is dissolving the department which had the authority to effectively interrogate the members of the Special Investigations Department.  This body was set up at the end of 2014 to investigate crimes against Maidan activists, and it was only with its creation that any significant progress has been made.  That progress has, however, been constantly obstructed by, among others, high-ranking members of the PGO management.

Lutsenko acknowledges the “mutual confrontation”, and says that from now on the head of the Department, Serhiy Horbatyuk will report directly to him.  He mentions also additional functions which Horbatyuk will have of “procedural management”/

There has been concern over Lutsenko’s appointment, mainly because of the irregular manner in which it was achieved.  Lutsenko was President Petro Poroshenko’s choice, but lacks the legal requirement demanded.  A first bill allowing this requirement to be waived was withdrawn, then subsequent bills kept being rejected by parliament.  What arrangements were made behind the scenes to finally get the number of votes needed for the bill to be passed can only be guessed at.  Lutsenko himself, who was appointed Prosecutor General on May 12, insists that he will be fully independent and that no promises were made to anybody.

Lutsenko is the fourth Prosecutor General since Euromaidan. All have come to office promising reforms and full investigation of, among other things, crimes against Euromaidan.

It is much too early to say how Lutsenko will get on, but there is relief that he has recognized the problems within the PGO which have helped to obstruct the work carried out by Horbatyuk and his team.

The Department had long experienced problems and the Advocacy Advisory Panel, a civic initiative of Euromaidan victims’ lawyers, and other civic organizations had publicly spoken of how their work was being sabotaged (see: Political PR & sabotage instead of real investigation on eve of 2nd Maidan anniversary)

Late in April it was even feared that criminal charges were being prepared against Horbatyuk.  Civic activists spoke out in defence of him and his department, stressing that without them there would have been no progress, and would be none if Horbatyuk was removed (see: Alarm bells ring as chief Maidan crimes investigator threatened with criminal charges).

Not everybody is positive in their assessment.  Serhiy Leshchenko, an MP from the Bloc of Petro Poroshenko and journalist, notes the fact that Lutsenko has given his subordinates within the PGO, including some figures who are widely suspected of sabotaging reform and the Maidan investigations, 100 days in which to “demonstrate results”.   Leshchenko says that Lutsenko has thus failed his “first exam” at cleaning up the Prosecutor General’s Office, and asks why “100 days?”  Why not a year? Or two?”