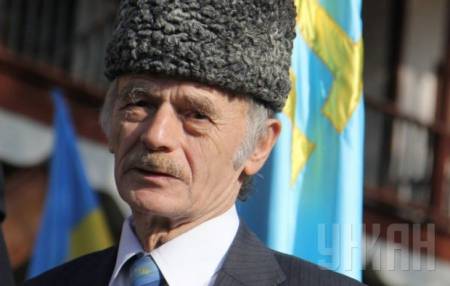 A Moscow court has, as expected, upheld Russia’s ban on veteran Crimean Tatar leader Mustafa Dzhemiliev entering his native Crimea, now under Russian occupation.  The hearing was behind closed doors, with Russia’s FSB claiming to have ‘secret information’.  Judging by a previously ruling, this was presumably material aimed at explaining why the 72-year-old internationally renowned chamption of Crimean Tatar and human rights, and Ukrainian MP must be banned “to ensure the state’s defence capacity and security, and to safeguard public order.”  Change a word here and there and the justification under the current Russian regime for persecuting Dzhemiliev become almost identical to that used by the Soviet Union for holding him in political labour camps for 15 years.

Mustafa Dzhemiliev was 6 months old when Stalin had the entire Crimean Tatar people deported from their homeland. He devoted decades of his life to the peaceful struggle for his people’s right to return to their homeland.  He enjoys world renown for his unwavering commitment to his people and to peaceful methods of defending fundamental rights.  He has been nominated for the Nobel Peace Prize at least twice, and has received countless honours throughout the world.

The news that Russia had issued a 5-year-ban on Mustafa Dzhemiliev entering Crimea came on April 22, 2014, a few days after the Crimean Tatar leader had arrived back in Crimea after Russia’s invasion and annexation.  Dzhemiliev immediately noticed that the Ukrainian flag had been removed from over the building of the Crimean Tatar Mejlis (representative assembly) and ordered its reinstatement.

Russia first banned Dzhemiliev, and then Refat Chubarov, Head of the Mejlis from Crimea.  It has since imprisoned the Deputy Head of the Mejlis Akhtem Chiygoz, brought criminal charges against another Mejlis leader Ilmi Umerov and has banned the Mejlis itself.

Lawyer Mark Feygin, who is representing Dzhemiliev, initially lodged an appeal against Russia’s Federal Migration Service over the ban.  This, as mentioned, was rejected with the judge seeing nothing untoward about the migration service’s claim that the ban was needed for Russia’s national security.

The latest appeal is against the FSB or Russian Security Service.  It was rejected by the Moscow City Court on May 20, and Feygin now has 10 days to lodge an appeal.  This will be heard, and almost certainly rejected by the Supreme Court.

With all domestic avenues tried, the next step will be the European Court of Human Rights, which Feygin is certain will rule in Dzhemiliev’s favour.  He is surely right, but judgements take a very long time to be heard.  There would then, of course, also be the issue of whether Russia complied with the ruling.  Russia recently passed a law claiming the right to refuse to implement ECHR judgements if these supposedly violate the Russian Constitution.  The law, incidentally, is in breach of Russia’s own Constitution.

As well as banning Mustafa Dzhemiliev, Russia has also issued an arrest warrant against him and placed him on the federal wanted list.  The charge defies belief, but is for real.  Mustafa Dzhemiliev is accused of having on May 3, 2014 tried to cross into Crimea from mainland Ukraine at the Armyansk border crossing.   The charge reads:

In short, Mustafa Dzhemiliev crossed the border into his own homeland which Russia, in violation of Ukrainian and international law had invaded and annexed a few months earlier, and which it is now preventing him from entering.