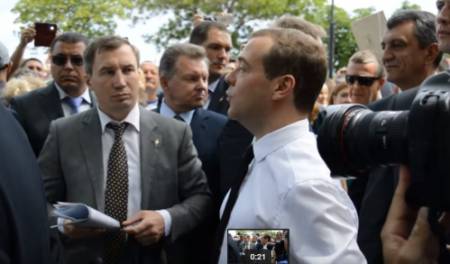 Russian President Vladimir Putin has signed a law widely believed to be aimed at destroying civil society altogether.  Only corrupt public officials in Russia and Russian-occupied Crimea will be celebrating since the new definition of ‘political activity’ now in force makes it much harder to criticize them.

Those who can now face punitive measures as so-called ‘foreign agents’ could include any Crimean pensioners who decided to ban together after Russian Prime Minister Dmitry Medvedev told them on May 23 that there’s no money for the promised indexation of their pensions, but “to hang on in there”.  Or any Crimean Tatar support group if the occupation authorities wanted to prove funding from mainland Ukraine or abroad.

The law passed on May 20 and signed by Putin into force on June 2 makes amendments to Russia’s legislation on NGOs.  This has become increasingly repressive under Putin, and since 2012, NGOs engaged in something that the law terms ‘political activity’ and receiving any funding from abroad have to be registered as a ‘foreign agent’.  More recently the Russian justice ministry has been given the power to forcibly label NGOs ‘foreign agents’, with this significantly restricting their rights and possibilities.

The Crimean Human Rights Group has warned that the law could crush civic society altogether, and is convinced that this is its aim.  Nor is it alone in such a stark assessment.   Ella Polyakova, Director of the human rights NGO Soldiers Mothers of St. Petersburg sees the law as aimed at “targeted pressure on and destruction of independent organizations, mainly environmental and human rights.  In fact, environmental organizations are even more under attack. It is not only the state that can get even by branding them as ‘foreign agents’, but also dishonest businesses.”  She says that the entire law contradicts the spirit of the law and of a law-based country, and is unforeseeable from the point of view of application.

The legislation had been criticized in part for the vague term ‘political activity’ which was seen as giving scope for abuse.  Even Putin appeared to concur that clarification was required.  Clarity has now indeed been provided.  Virtually everything can be deemed political activity and will be if it suits the authorities to label an NGO as ‘political’.

It is then no big step to turning it into a ‘foreign agent’.  According to Skrypnyk, this is for the moment more difficult in Crimea since civic organizations cannot directly receive foreign funding because of sanctions.  The rights group is, however, sure that where the will is there, the authorities will find a way of accusing civic activists of getting money from abroad.

It is probably only a matter of time before Crimean Tatar or other Ukrainian organizations with support from mainland Ukraine are also labelled ‘foreign agents’ for what will get described as ‘foreign funding’.

Calling any organization ‘political’ could not now be simpler.  You can now be labelled a political organization for issuing a public appeal or organizing public discussion aimed at persuading the authorities to pass, change or revoke laws, etc.  Or if they assess decisions taken by the authorities or its policy.  You’re dead political as well if you carry out surveys of public opinion, or if you try to observe elections.

Any group of citizens who join forces to protest against a supermarket being built on their children’s playground or over a new tax or higher prices becomes ‘political’.   The Kremlin is clearly anticipating a lot of protest over the economic situation.

A group formed in defence of political prisoners or simply formed to ensure that their children are cared for could also be labelled a ‘foreign agent’.

This is of immediate relevance to Crimea where the number of arrests on spurious charges is increasing.  The families of 14 Muslims, almost all of them Crimean Tatar, have formed a support group, working together with rights activists.  Lilia Budzhurova, a prominent Crimean Tatar journalist, recently received a formal warning of “the inadmissibility of extremist activities” less than a week after she wrote a moving appeal for active solidarity and support for the children whose fathers are in custody in Russian-occupied Crimea on fabricated charges.

This new law now in force will be yet another weapon against such initiatives.

There are some exceptions, with cultural, scientific and charitable organizations not considered ‘political’.  Once again in Crimea under Russian occupation, it remains to be seen whether such exceptions are honoured.  Certainly an organization aimed at promoting Russian literature can expect to go untouched.  Judging by the detentions and subsequent court trials of four Ukrainians over a totally peaceful gathering to honour the great Ukrainian poet Taras Shevchenko in March 2015, there is less optimism that the same will be true for organizations promoting Ukrainian and Crimean Tatar culture and writers.

According to Alyona Popova from the Ukrainian Cultural Centre in Crimea, people are already wary of joining the Centre, fearing trouble if they openly demonstrate their position.  Since the Coordinator of the Centre, Leonid Kuzmin and other members have faced ‘warnings’ that ‘extremism’ is prohibited, interrogation or even court cases, the fears are not unfounded.  This new law is yet another step aimed at crushing any dissent or civic activism.