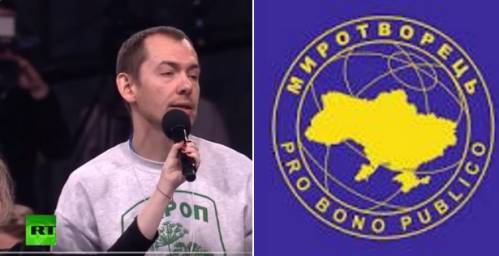 Instead of closing down as promised after its scandalous publication of the personal details of Ukrainian and foreign journalists with ‘accreditation’ from Kremlin-backed militants, the Myrotvorets Centre website has published a new list, this time ‘exposing’ journalists working in Russia.   Those it accuses of ’collaboration’ include UNIAN’s Roman Tsymbalyuk who has for two years running asked extremely hard-hitting questions of Russian President Vladimir Putin about Russia’s aggression against Ukraine and the Ukrainians it is holding prisoner.

In the list posted on May 24, the list of journalists from, among others, UNIAN, Euronews, Newsweek, Figaro and others, are claimed to be ‘collaborating with the aggressor state”.  If the alleged ‘collaboration’ is in more than merely having accreditation in Russia, Myrotvorets is not letting on.  This made the website decide it has the right to review the addresses, telephone numbers and emails of 293 journalists.

Detektor Media has examined the list.  While it does contain the name of at least one journalist known for publications and videos supporting the Kremlin-backed militants, the choice of other journalists from Ukraine and different countries seems quite inexplicable. It has since been asserted that the publication was a 'joke' aimed at demonstrating that the accusations against Myrotvorets are exaggerated, since the list was virtually just taken from the Russian Foreign Ministry's website.  If this was their intention, it was not recognized as such by the journalists themselves, nor by others.

The message from the EU and German Embassy was clear and passed to Interior Minister Arsen Avakov by the EU Ambassador Jan Tombiński.  They call on the police to ensure removal of the list and “to provide the necessary protection to all journalists who are exposed on this list, in particular since a number of them have already received threats”.

As reported, there was considerable protest within Ukraine and abroad over the first list published on May.  Then four thousand names and personal details about journalists who had received what the militants in the self-proclaimed ‘Donetsk and Luhansk people’s republics’ call accreditation were posted.

The Myrotvorets Centre for Researching Evidence of Crimes against Ukraine’s National Security [ Peacemaker] is closely linked with and probably owned by Anton Gerashchenko, MP and advisor to the Interior Minister Arsen Avakov.  Although opinions differ, concern has been expressed before over the material posted on its website.  Myrotvorets posts personal data of people whom it considers to be ‘separatists’ or Kremlin agents working against Ukraine’s national security, but there is no evidence that they properly check the information they post.  Nor is publication necessarily warranted even if the information is accurate.  The name and address of Oles Buzina, the controversial journalist and writer murdered in April 2015,  were posted on their site two days before Buzina was gunned down close to his apartment block.

On May 13, Myrotvorets announced it was closing down.  As well as its links with Gerashchenko, it does have backing from people in the government, including, one assumes, the Interior Minister who came out with a highly controversial remark suggesting support for its basic activities.  One way or another, the closure was extremely short-term.

Following the publication on May 24, the Ukrainian News agency, whose correspondent Krystyna Butko is on the list, accused Myrotvorets of continuing to slander Ukrainian journalists and promised legal action.

Both Dmytro Kuzmin, the Chief Editor of Ukrainian News and UNIAN correspondent in Moscow Roman Tsymbalyuk used the term “idiocy”.  The following should explain why the term seems perfect.

During Putin’s yearly televised press conference on Dec 17, 2015, Tsymbalyuk asked him the following:

“In the context of your repeated assertions that there are no Russian military personnel in Donbas, I’d like to pass on greetings from Captain Yerofeyev and Sergeant Aleksandrov, from the Third Brigade in Tolyatti (Russia).  Will you be exchanging them for Nadiya Savchenko, Oleg Sentsov, Gennady Afanasyev, Oleksandr Kolchenko, Stanislav Klykh… (and that is anything but a full list)?

And if possible, another question …  a continuation of the first.  The Minsk Agreement is ending, not one of the parties is implementing it.  So what should we expect from you in January?  Will you again go on the offensive, or offer some kind of negotiations, or maybe you can forget about Ukraine for a while?” (see Putin’s response)

Exactly one year earlier, Tsymbalyuk had been no less hard-hitting in his question to Putin,   He asked Putin first about “the punitive operation that you have organized in the East of our country, moreover, mainly against the Russian-speaking population.  It is no secret that Russian soldiers and Russian militants are fighting there.  How many have you sent [to Ukraine]?  How much [military] technology?  How many have been killed there? What would you as the chief commander of the forces tell the families of Russian officers and soldiers killed there?”  He then went on to talk about Nadiya Savchenko, imprisoned Crimean filmmaker Oleg Sentsov and the other Ukrainians held in Russian prisons (Putin’s response here).

This is what Myrotvorets calls “collaboration”.