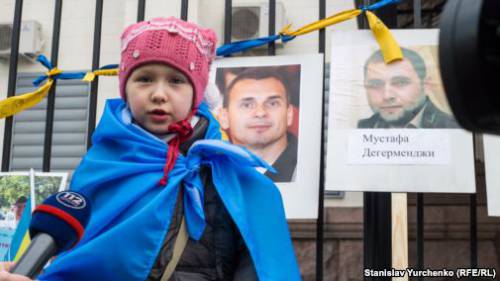 It is excellent that Nadiya Savchenko has been freed after nearly 2 years in Russian captivity.  EU and US attempts to attribute this to Russia’s willingness to implement the Minsk Agreement do, however, seem at best optimistic.  There is little or no progress on freeing the other Ukrainians unlawfully held in Russia, with the ‘extradition procedure’ in the case of filmmaker Oleg Sentsov, civic activist Oleksandr Kolchenko and others looking increasingly like a delaying tactic.  There is also a large, and increasing number of Ukrainians, most of them Crimean Tatars, imprisoned in Russian-occupied Crimea.

At his annual press conference on Dec 17, 2015, Russian President Vladimir Putin was asked whether Russia would be exchanging Savchenko and the other prisoners.  He answered like any kidnapper claiming that an exchange must be of ‘equal worth’.

The Minsk Agreement states that all “hostages and illegally held persons” must be released on an “all for all” basis.  All EU structures and democratic countries have stressed that the release of all those illegally held in Russia falls under that agreement.

The two Russian military intelligence [GRU] officers were caught during a military operation provoked by the Russian / Kremlin-backed militant side in which one Ukrainian soldier was killed and others injured.  The two officers repeatedly told OSCE, Red Cross officials, as well as a Russian human rights activist and independent Novaya Gazeta journalist that they were indeed GRU officers, though later they began denying this (see: Russian spetsnaz officers caught in Ukraine sentenced to 14 years).

Nadiya Savchenko was captured by Kremlin-backed militants in Ukraine and abducted to Russia where she was held unlawfully for almost two years and sentenced to 22 years after an internationally condemned trial.

The exchange was indeed unequal.

Why only Nadiya Savchenko?

Almost all the Ukrainians below have been recognized as political prisoners by the Memorial Human Rights Centre which stresses that their imprisonment and ‘trials’ are part of Russia’s aggression against Ukraine since its invasion and annexation of Crimea in early 2014. There are suggestions that the ’pardoning’ and release of Yury Soloshenko and Gennady Afanasyev may be imminent, but there were such reports about Savchenko’s release for months before it happened.  There is no news about any of the other prisoners held in Russia, and the number of people imprisoned in Crimea is increasing, with the West remaining disturbingly silent about these new arrests.

Oleg Sentsov is a renowned filmmaker and his continued imprisonment is also not forgotten.  Russia has, however, hidden him and the three other Crimean opponents of Russia’s invasion in the furthest corners of the vast Russian Federation.  The tactic has, sadly, worked, with the media largely forgetting the men.

“What is this, if not ideologically motivated state terror?  The aim is to intimidate and suppress any peaceful resistance in Crimea from those who regard themselves as citizens of Ukraine and oppose Russia’s annexation of Crimea.”, the authors wrote.

Yury Soloshenko turned 74 on May 7.  He was then still held in a Nizhny Novgorod prison, but has recently been brought to Moscow, without any explanation, and it is hoped that the elderly Ukrainian who was recently diagnosed as having cancer will finally be able to return to his family in Poltava.

Svetova wrote in April 2015 that in the ten years that she had been visiting people held in Russian prisons, she had never seen such flagrant violation of Russia’s Constitution as in Soloshenko’s case.   He was, for example, prevented from having a proper lawyer, and almost certainly tricked by the state-provided lawyer into pleading guilty to insane ‘spying’ charges.  At a closed trial on Oct 14, 2015, the elderly Ukrainian with no access to state secrets or Russian weapons, was sentenced to 6 years’ maximum security prison.

Like Soloshenko, Valentin Vyhivsky was also charged with spying, and sentenced to 11 years after a secret trial.  In his case, he almost certainly pleaded guilty because of the torture he was subjected to, with no proper lawyer present to defend him. He has been prevented from seeing even his own mother without guards present who stopped him talking about anything remotely connected with his ‘case’.

The concerns are the same with regard to  Viktor Shur  He is a Russian national, but has lived in Ukraine for many years and has a Ukrainian family.  There was quite simply no possibility of his spying, yet he is now serving a 12-year-sentence.

Memorial HRC has declared Ukrainian Serhiy Lytvynov a political prisoner and called the cowherd from a Luhansk village near the border with Russia a victim of “the Russian-Ukrainian conflict”, who was used for propaganda purposes.  The 33-year-old has been held in Russian detention since August 2014 and was initially tortured to extract ‘confessions’ to fictitious war crimes.  His lawyer did not merely prove that Lytvynov had not committed the crimes, but that the alleged crimes had not taken place.  Nor could they have since the people mentioned and their addresses were simply made up.

Having held Lytvynov in custody for a year, Russia then came up with new criminal charges which were openly absurd.  Despite these also being demolished in court, Lytvynov was sentenced to 8.5 years’ imprisonment.

Sentences of around 22 years are expected on May 26 in the ‘trial’ of these two Ukrainians which just ended in Grozny, Chechnya.

The charges, over alleged events in Chechnya in 1994/95, are at least as grotesque as those originally brought against Lytvynov, and there is at least as much evidence that the men were subjected to terrible torture during many months when they were held totally incommunicado.  The charges were also proven to have no substance in an exhaustive analysis by the Memorial HRC, yet the men were found guilty, after a gravely flawed trial.

The list is longer, with 31 Ukrainians still in detention or serving politically motivated sentences in Russia or Russian-occupied Crimea  (please see and press the names below for more detail).  This, of course, is the other problem.  There was a major campaign for one individual -  Nadiya Savchenko.  An ever-increasing list of prisoners does not gain the same attention.  We have seen information about ‘extradition procedure’ in the case of some of the prisoners in Russia.  It is much to be hoped that this is for real, yet optimism is strictly limited.  Such ‘extradition’ falls under a bilateral agreement and entails the serving of a sentence in the person’s own country.  We are dealing here with political prisoners and there can be no question of guaranteeing that they would serve monstrously unjust sentences.  The reports that appear after each such mention of ’extradition’ are misleading, but without them little is even heard.  Where’s ‘the news’ when the prisoners remain in detention?

However, that means that we let Russia win and destroy the lives of innocent Ukrainians.

In custody in Russian-occupied Crimea

14 prisoners, almost all Crimean Tatars, facing fictitious ‘terrorism’ charges over alleged involvement in Hizb ut-Tahrir, an organization which is legal in Ukraine and which Russia has never properly explained why it is banned.