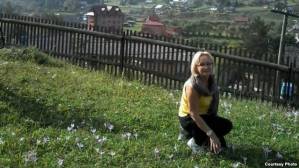 Former Donetsk resident Nadia Zaslavska spoke to Dmitry Volchek from RFE/RL’s Russian Service about why the conflict in eastern Ukraine drove her from the city even though she had spent many happy years living there.

I was born in the Dnipropetrovsk region but I spent more than 30 years in Donetsk. I built my house there with my own hands. It was a spacious house, with two stories and big French windows.It was a dream house. The war reduced it to a pile of rubble.

When the Euromaidan [pro-democracy protests] began in late 2013, I traveled to Kyiv to witness it. I was happy this was finally happening in our country. I know who Viktor Yanukovych, our ousted president, is because I’m from the Donetsk region, too. I was against his election, I never voted for him. I always knew it would end badly.

Unfortunately, I was the only person on my street with this opinion. People started walking around the city brandishing Russian flags and shouting "Russia!" Then Ukrainian television was shut off. The only channel we had access to was run by the DNR [Russia-backed separatists in Ukraine’s Donetsk region].

There were numerous drug addicts in our city before the war. Many of them joined the DNR army. A friend of mine once bumped into a former schoolmate, a junkie who had enrolled with the separatists. This drug addict told my friend: "Now I feel like someone, because I know that I have power."

All my life I spoke Ukrainian with my parents. I’ve always loved my native language. But at some point my mother and I became afraid of speaking in Ukrainian, we started whispering to each other. All our neighbors supported the separatists, they believed that Russia would come and rescue them.

We had a wonderful airport, it was close to my house. When the war [between Kyiv’s forces and the separatists] began, I initially thought that it was just a bluff, that it wasn’t real. At first the city of Slovyansk was captured, and we thought it would end with that. Then Ilovaisk, a town near Donetsk, was taken. Then Peski, which is also close by. Soon enough, we found ourselves at the heart of events – terrible, bloody events.


The windows were shattered and riddled with bullets, as though someone had walked around with a Kalashnikov and shot repeatedly...

I had a friend in my neighborhood, she also had a beautiful house. It was shelled right from the beginning. She was the only friend I had who shared my belief that all this was a nightmare through and through. She was struck by a round of shelling as she tried to retrieve some belongings from her burning house. She died. Her car is still parked in my street, a reminder of her life.

When the war started, a checkpoint was set up on a bridge next to my home. This meant our area became a target and was frequently hit by artillery fire. The mayor of Donetsk announced that we had all been warned of the danger and that our street had been evacuated. In reality, no one had told us anything.

One after the other, our neighbors left and I ended up alone with my elderly mother. We had two dogs, two cats, and other pets left in our care by neighbors, so we stayed. There was no gas, no electricity, no running water. We survived in these conditions for four months.

One day I was carrying two big bowls of food for the neighbors’ dogs when a jeep drove past in the street. One of the men inside, who appeared to be from the North Caucasus, took out his Kalashnikov assault rifle and aimed it right at my face. I dropped the bowls and scrambled over a fence; I was terrified. The men laughed. Whenever I walked past the checkpoint on the bridge, I could also hear the sound of guns being reloaded right behind me. These men were just interested in watching the reactions of ordinary citizens. They all looked like alcoholics and junkies.

We fled the city at night, between 3 a.m. and 4 a.m. This was the time when the shooting usually lulled. My mother and I took one dog with us and ran to the train station. We caught the last train to Dnipropetrovsk. The controllers let us in with the dog and didn’t ask for any tickets.

In Dnipropetrovsk, we found refuge in an empty shed on the steppe. Several days later we received a phone call from acquaintances in Donetsk who told us that our house had been shelled. I found my way back to Donetsk to inspect the damage. But shells started falling -- it’s a miracle I even made it to my street. There were tanks and armored personnel carriers parked outside my house, or what remained of it. I entered through the back yard. The windows were shattered and riddled with bullets, as though someone had walked around with a Kalashnikov and shot repeatedly at my windows. I took shelter in a basement in which we used to store food.

I heard the men talking outside. They had distinct Russian accents, and they were standing in my yard, arguing about shoot-outs and targets. I caught a glimpse of their Russian uniform and of the Russian flags sewn on it. They chatted about how beautiful eastern Ukraine was, how fertile the soil was, how good it would be to settle down here. It’s hard for me to express the horror I felt. I bear witness to this, despite all the assertions that Russia was not involved in the fighting.

I sat in the basement for one day and one night. This is where I recorded a message on my phone for my daughter [in the United States]:

"Not at any price do I want to stay here.… This is our land, and these monsters want to destroy it. There’s never enough land for them. It’s big, it’s beautiful, and they are killing it. Daughter, wherever you live, you must be proud of having been born in this country, in our dear, long-suffering Ukraine."

The following night I escaped my shelter and ran to the train station, where I found a vehicle that took me to Dnipropetrovsk.

All this would never have happened if Russia had left us in peace. We had a wonderful city, almost European. We would have been able to weather the crisis. There would have been no war without Russia, I’m sure of that.

Now I live in Kyiv and I will never go back to Donetsk.

My house was destroyed. My pets were shot dead and left to rot on the pavement, like all the other cats and dogs in our street. The homes of my pro-Russian neighbors were destroyed too, by the way. No one was spared.

The residents who opposed the separatists have almost all fled. Many of those who stayed behind are too sick or too frail to travel. The others continue to believe that Russia will one day provide them with a beautiful, happy life.