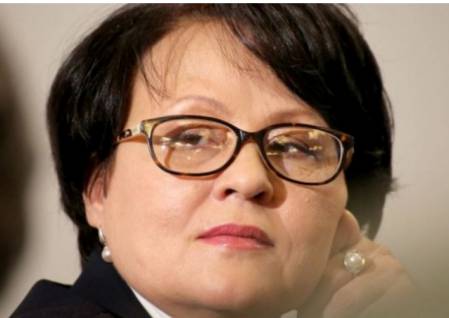 Lilia Budzhurova has received a formal warning of “the inadmissibility of extremist activities” 6 days after writing a moving appeal to show solidarity and support for children whose fathers are in custody in Russian-occupied Crimea on fabricated charges.  The 3-page opus from the Simferopol prosecutor’s office cites her article ‘Now these are our children’ and posts on Facebook, and suggests that these contain “extremist utterances” and “publications which could incite ethnic and religious hatred and enmity”.

The prosecutor clearly preferred not to quote the article which doubtless prompted this warning and instead cites a Facebook post from April 2.  In the latter, Budzhurova asks “when this will all end” and suggests that they will soon be grabbing Crimean Tatars off the street, and notes that this is only a half-step away from making them wear a yellow armband.

Budzhurova was responding to an armed raid on March 31 of a café outside Simferopol.  Crimean Tatars were clearly targeted, with people ‘of Slavonic appearance’ ignored.  At least 35 Crimean Tatars were taken to the so-called Centre for Countering Extremism, and released around 4 hours later.  They were not questioned about any crime, yet all those detained had their fingerprints and DNA samples taken.

The ‘incitement to racial or religious enmity’, it transpired, was in Budzhurova’s reaction, not in that latest act of armed intimidation targeting only one ethnic group.

The article on children stated that:

"There are 18 Crimean Muslims behind bars at present, 17 of them Crimean Tatars.  I will not write about how the criminal cases against them were fabricated.  A lot has been written about this, and obvious facts don’t need confirmation. I want to speak of something else.”

The author went on to explain that most of those now in prison have underage children.  It was terrible to even imagine what could be going on in those little ones’ hearts as their world had fallen apart, and their fathers had been taken away from them.

In Muslim families, she wrote, it is usually the man who is the breadwinner, while the wife stays at home and cares for the family. What are these families to do now?

Budzhurova wrote that while she didn’t know yet what needs to be done and how, it was clear that once-off help could not be enough.  The ‘justice system’ of those like de facto prosecutor Natalya Poklonskaya is aimed at long sentences for the 18 men.  Perhaps they need to create an initiative group for contact with the families so as to help them on a regular basis. She asks people with any ideas to write to crimeantatars[at]garadeniz.com or phone +7(978) 208-56-55.

There are no words to describe the cynicism needed to call this appeal ‘extremism’, although nothing under Russian occupation makes it particularly surprising.

On May 30, Lilia Budzhurova was delivered the formal ‘warning’ which called her appeal “propaganda and agitation aimed at arousing ethnic or religious hatred and enmity”.  The 3-page opus outlines the laws which she is alleged to have breached.

The document points out that she was already issued with a warning back in 2014 while still the Director General of the Crimean Tatar TV channel ATR which Russia forced to stop broadcasting in Crimea.  Budzhurova is threatened with liability if she does not comply with this specific understanding of ‘extremism’.

Lilia Budzhurova has stated clearly that she will not be cowered by this intimidation.  She says that there have already been offers of help, and calls on others to come forward.

The need is great.

There are now 36 children whose fathers are held in custody and are facing long sentences on fabricated charges.

Akhtem Chiygoz, Deputy Head of the Crimean Tatar Mejlis was arrested in January 2015 and remains in custody, together with Ali Asanov and Mustafa Degermendzhy.  Chiygoz has two children, Asanov four, with the youngest – Mustafa born after his father was arrested.

All three men are facing legally grotesque charges over a pre-annexation demonstration which Russia has no jurisdiction over.

They have been recognized by the renowned Memorial Human Rights Centre as political prisoners.

14 Crimean Muslims are in custody, with four about to go on trial.  They are charged with either ‘organizing or belonging to a terrorist organization’.  The charges are over alleged, though unproven and denied, involvement in the organization Hizb ut-Tahrir which is legal in Ukraine and in most countries.  Russia’s Supreme Court declared it ‘terrorist’ along with 14 other organizations in 2003, without providing any proper explanation. The judgement was also effectively concealed making it impossible for the organizations themselves and human rights NGOs like Memorial HRC to lodge appeals.

All men are facing very long sentences and will certainly be declared political prisoners by Memorial HRC, which has repeatedly outlined the flaws in such cases.

Most of the men have children, many very small, and are the breadwinners for their families.  After armed searches carried out with gratuitous violence, despite the presence of young children, all have been remanded in custody.  Court after court in occupied Crimea has ignored the lack of any grounds for holding them in custody and compelling humanitarian reasons for releasing them.

These are OUR POLITICAL PRISONERS.  Please help publicize this travesty of justice.

The dates are when the men were arrested.