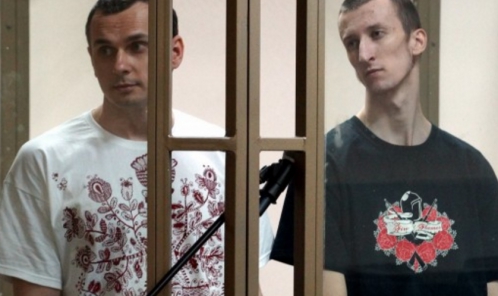 Russia’s Supreme Court has refused to even consider the cassation appeal lodged against the sentences passed on world-renowned filmmaker Oleg Sentsov and civic activist Oleksandr Kolchenko.  The move was predictable, yet still profoundly disturbing given the lack of any grounds for the charges and “Stalinist” nature of the trial.

Dmitry Dinze, Sentsov’s lawyer, had earlier explained that they were appealing against virtually every point in the first court’s sentence and seeking an acquittal.  This was a cassation level appeal, since the sentences passed on August 25, 2015 had already been upheld by a Supreme Court military panel on Nov 24.

The November appeal hearing had been insultingly short.  Sentsov and Kolchenko were not brought to the court, but watched the proceedings by video link from the remand prison.  Neither man was under any illusion then about the chances for a fair hearing, and Sentsov positively refused to stand when answering questions from the court.  “I don’t usually stand when I watch television, your honour”,  he responded when the judge tried to reprimand him for this.

This time the appeal was not even heard, although the defence had presented compelling grounds for disputing the verdict. Vladimir Samokhin, who is also representing Sentsov, explained in detail how the court had convicted Sentsov of creating a terrorist organization without seeing any evidence that such an organization had existed, let alone that Sentsov had been a member of it.  The indictment against the men did not contain any elements of the ‘terrorism’ they were charged with. Samokhin outlined also the numerous infringement of procedure during the trial.

The cassation appeals were much more detailed, but essentially repeated the key findings which prompted the Memorial Human Rights Centre to declare both Sentsov and Kolchenko political prisoners.

Everything about the imprisonment and trial of Sentsov and Kolchenko is reminiscent of Soviet terror, not a modern democratic country, and it is no accident that Russian human rights defenders called it an “absolutely Stalinist trial” and “ideologically-motivated state terror” against opponents of Russian occupation of Crimea.

Sentsov, Kolchenko and two other Crimeans who opposed Russia’s invasion and annexation of their homeland – Gennady Afanasyev and Oleksy Chirniy - were arrested in May 2014, and held incommunicado for weeks before being taken to Russia.  There, on May 30, the FSB or Russian Security Service claimed that they had been involved in a ‘Right Sector terrorist plot’.  There was nothing to indicate any presence of the ultra-nationalist Right Sector in Crimea, and the idea that Kolchenko, who is a committed left-wing anarchist would have taken part in a far-right movement’s ‘plot’ was absurd.

There were constant attempts to deny that the men were Ukrainians and to foist Russian citizenship on them.

39-year-old Sentsov is not only a world-renowned Ukrainian filmmaker and Euromaidan activist, but also the father of two young children.  It is now over 2 years since they last saw their father, who has been moved to Yakutia in the Far East of Russia.

Sentsov was sentenced to 20 years, Kolchenko to 10.

Extradition procedure is now officially underway.  What this means is, unfortunately, unclear.  The bilateral agreement between Ukraine and Russia is to enable prisoners to serve sentences in their home country.  Ukraine will certainly not guarantee that men will serve monstrous politically motivated sentences.

There appears to be some hope that Afanasyev and 74-year-old Yury Soloshenko may be ‘pardoned’ and returned, probably as part of an exchange.

Please write to the men

Since it is not clear why Gennady Afanasyev is in Moscow, please write to him – and to Oleksiy Chirniy – using post.rosuznik[at]gmail.com