The Unraveling Of Moscow’s ’Novorossia’ Dream 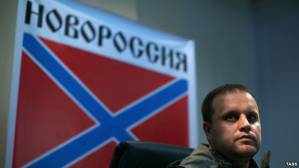 Pavel Gubarev during a news conference in the eastern city of Donetsk.

The Kremlin’s project to create “Novorossia” in southern and eastern Ukraine and the Ukrainian Black Sea peninsula of Crimea was conducted in secrecy and haste in the first months of 2014.

Details of how that project rose and ultimately fell have been hard to come by. But Aleksandr, a Moscow businessman who asked that his identity not be revealed, had a front-row seat as an insider in Crimea and agreed to tell RFE/RL what became of the dream he still cherishes, despite the disenchantment of his months in Crimea.

“Russia lost its chance to create any ‘Novorossia’ on July 17 [2014], when the passenger airliner was shot down over territory held by the militants, ” Aleksandr said during a recent interview in Moscow, in reference to the downing of Flight MH17 by a Russian-made, surface-to-air missile that killed 298 people and shocked the world. “After that, the idea of Novorossia was closed. So it was shut down and the war was soon frozen.”

Aleksandr traveled to the Crimean capital, Simferopol, in February 2014 to work for the Russian Unity party of Sergei Aksyonov, who went on to become Crimea’s de facto governor following Russia’s annexation of the Ukrainian region. After the annexation, Aleksandr worked within Aksyonov’s administration.

Initially, Aleksandr said, there was no money for arms or equipment. But on March 3, the Russia-backed insurgents managed to take over local branches of several Ukrainian banks. “Money started coming in by the bagful every day, ” Aleksandr said.

Soon, he was able to offer “volunteers” up to 800 rubles (roughly $22.40 at the time) a day, and the number of recruits skyrocketed. After Russian intelligence forces took over the regional Supreme Soviet on February 28, Ukrainian police forces across Crimea seemingly melted away, and Aleksandr’s self-defense forces scrambled to replace them.

He remembers the first week of March as particularly tense, as pro-Russia Crimeans waited nervously for any sign from Moscow.

“Until March 6, it was forbidden to speak about unification with Russia or to hang the Russian flag, ” he says. “Everyone was waiting for a final decision to be made in Moscow.”

Aleksandr believes Moscow was waiting to see how Ukraine’s military would respond to the unfolding situation. Only after it became apparent that Kyiv was not ready for a confrontation did the Kremlin give the final go-ahead.

Russian flags -- that had been shipped in by the ton -- were unfurled, and a referendum on independence was scheduled. Aleksandr’s self-defense forces began arming themselves with weapons taken from Ukrainian armories. Aleksandr says the outpouring of public support was incredible, with citizens bringing food, money, and supplies to the self-defense forces’ office in Simferopol. By March 29, six self-defense units of 80-100 men each had been fully equipped. After the Ukrainian base at Mazanka was occupied, all the units’ hunting rifles were replaced with automatic weapons and side arms.

At the same time, more and more “representatives of Moscow” were appearing in the offices of the de facto Crimean government. One day a man showed up at Aleksandr’s office and said, “I’m Sasha, a PR specialist from Moscow.”

“Later I found out that his last name was Borodai, after he became prime minister of the Donetsk People’s Republic, ” Aleksandr said in a reference to a separatist group that came to control swaths of Ukraine’s Donetsk region. “What he was doing in Crimea, I don’t know. But before the referendum I saw him here and there, but later he completely disappeared. So many strange people arrived from Moscow and the rest of Russia that there is no way to remember them all.”

The disputed Crimean-status referendum was held under occupation on March 16, despite being declared illegal by Ukraine’s Constitutional Court. Aleksandr conceded it was illegal but said he remains convinced that the results were an accurate snapshot of the mood at the time.

“It was one of those referendums where you don’t have to falsify anything, ” he said. “At the time, the overwhelming majority of the population voluntarily voted for unification [with Russia]. Now the mood isn’t the same as it was in the beginning.”

The enthusiasm was short-lived. “Already on March 20 the process of dividing up positions was under way, as a result of which the majority of corrupt officials from [ousted Ukrainian President Viktor Yanukovych’s] Party of Regions either kept their posts or got new ones.”

“The entire Party of Regions organically merged into United Russia, while the people expected something completely different, ” Aleksandr recalled. “They wanted new authorities.”

One of the most mysterious strangers from this period was a man who introduced himself as “the Kremlin’s emissary, Igor.” It turned out to be Igor Girkin, aka Strelkov, who took over the command of separatists united under the banner of "Crimean self-defense forces" and was later self-proclaimed defense minister of the Donetsk fighters opposing Kyiv’s control.

Girkin was clearly in command in Crimea at this time, Aleksandr said, and even Aksyonov deferred to him. His main task in March was accelerated military training for newly formed Crimean forces and selection of the best among them for transfer to Donbas, as a belt of eastern Ukraine is known. Aleksandr said Girkin personally negotiated and oversaw the withdrawal of Ukrainian forces from Crimea.

“Specialists from Moscow” brought in communications equipment for the commanders fighting in Donbas. “By the beginning of May, there were about 20 [special four-digit] numbers for them, ” Aleksandr said.

Initially, arms and equipment came from Russia via Crimea. But as Moscow grew more confident, he said, it began sending the equipment directly across the open border between Ukraine and Russia’s Rostov Oblast.

Very soon, however, the militant groups in Donbas “turned into bands occupied with violence and looting, ” Aleksandr said. “People were taken hostage and released for ransom. Often they fought among themselves for spheres of influence.”

“I knew the situation was hopeless when I found out that our fighters themselves had fired on a truck with our wounded that were being evacuated from the Donetsk airport on May 26, ” he said. “My good friend was killed in that bloodbath. That’s when I understood it was all over, that people had been deceived and sent to die for nothing.”

“In the pro-Russian zone [in Donbas], weapons were handed out to criminals and drug addicts who robbed people, ‘commandeered’ businesses, homes, and cars, ” he said. “The situation for the Russian World project became more and more catastrophic. That romantic of the Russian World, Girkin, could not cope with the anarchy that was developing around him.”

In addition, the Russia-backed forces in Donbas held a “referendum” on self-rule that was “so unconvincing” that even the Russian media barely mentioned it.

The project literally ended in disaster, Aleksandr said, when a Malaysia Airlines passenger jet was shot down over Donbas, killing all 298 people aboard. The Kremlin at that point gave up on the Novorossia idea, he added.

Aleksandr himself continued working in Crimea, although corruption flourished from the beginning when it became clear that the region’s tourism-driven economy had been hit hard. He said criminals and corrupt officials were making good money smuggling sanctioned goods from the European Union across the Kerch Strait into Russia as “aid for refugees.”

He left Crimea after a run-in with one such smuggling operation that he said was protected by someone in Russia’s Federal Security Service (FSB).

“The Russian World that I dreamed of, that the people of Crimea expected, that the volunteers who died in Donbas believed in, crumbled into dust before my very eyes, ” he recalled.