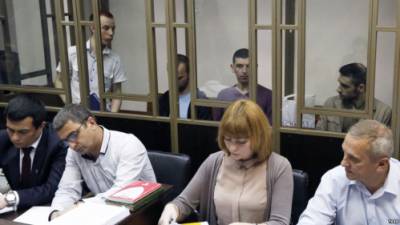 Russia’s trial of 4 Crimean Tatars on gravely flawed ‘terrorism’ charges began on June 1 as expected – with a flagrant but telling infringement of the men’s right to a fair trial.  All four men have their own lawyers, yet the court appointed four Russian lawyers.  The men’s objections to this were ignored.

Nuri Primov; Rustem Vaitov; Ferat Saifullayev and Ruslan Zeitullayev all pleaded not guilty to the charges of either organizing in Zeitullayev’s case, or being involved in a ‘terrorist organization’.   Three of the men have been in custody since January 2015, while Ferat Saifullayev was arrested a bit later, at the beginning of April 2015.

Emil Kurbedinov is representing only Ruslan Zeitullayev after he was prevented, also in breach of the law, from defending all four men.  He reports that the court scheduled hearings for virtually all working days until the end of June.  The lawyers must be in Rostov on the Don, though witnesses will be questioned by video link from Sevastopol.

Objections to the treatment the men are receiving, including being brought to the court in handcuffs and bent over were also ignored.

The charges are based solely on unproven allegations that the men belong to Hizb ut-Tahrir.

Hizb ut-Tahrir is a pan-Islamist organization described as tending “to avoid violent means and instead may focus on social work, education and dialogue initiatives”.

It was banned in 2003 as terrorist by the Russian Supreme Court in a hearing so secret that human rights organizations only learned of it a year later, long after the period for appealing against it had elapsed.

The grounds given have been condemned by the Memorial Human Rights Centre as having nothing to do with ‘terrorism’ as understood in Russian legislation.

Hizb ut-Tahrir is legal in Ukraine and in most countries.

Over the last few months Russia has carried out a number of mass armed searches and arrests in Crimea.  These and further arrests, with 14 Crimean Muslims now facing the same charges seem aimed at instilling terror in Crimean Tatar communities, and creating the image of Crimean Muslims as dangerous ‘terrorists’.

Russia is ‘trying’ and sentencing Muslims to very long sentences for nothing.  Attention from mainland Ukraine and from the international community is urgently needed.  Please see and share further details about the charges and the men now in custody here:  Russia’s Conveyor Belt of Repression in Occupied Crimea