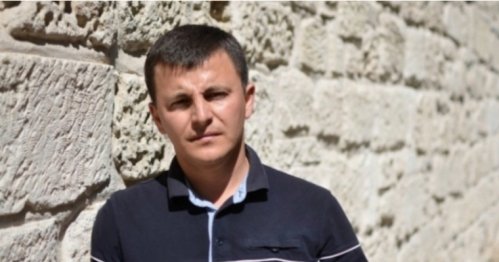 It is 10 days since Crimean Tatar activist Ervin Ibragimov was abducted from near his home in Bakhchysarai and there are very grave fears for his safety.  This is not the first forced disappearance since Russia invaded and annexed Crimea. It will also not be the last while there remains so little international reaction to the unrelenting terror and rights abuses against Crimean Tatars and other Ukrainians in occupied Crimea.

30-year-old Ervin Ibragimov is a well-known activist and member of the Executive Committee of the World Congress of Crimean Tatars.  There is every reason to believe that these were the reasons for his abduction, with the behaviour of the de facto authorities only confirming the worst suspicions.

The FSB in Simferopol initially refused to accept the report from Ibragimov’s family and only initiated an ‘investigation’ after hundreds of Crimean Tatars ignored the likely risks under Russian occupation of reprisals and FSB surveillance and gathered outside the police headquarters demanding action in finding Ibragimov.  Aside from formally opening proceedings, there is no evidence that the de facto authorities are doing anything to find him.  The same lack of action has been observed with earlier forced disappearances.

Unlike the occupation authorities, Ibragimov’s family and colleagues have been desperately searching for any links and a reward has been promised for any information.  CCTV recordings have been found that fix the exact time of the abduction between 10 and 11 p.m. on May 24.  The video footage shows a number of cars driving past, as well as a young couple on foot who might possibly remember something.  It seems that at one point, Ibragimov, clearly understanding the danger, tried to flee, but was seized.

His abduction comes at a time when repressive measures are mounting against Crimean Tatars and other opponents of Russia’s occupation of Crimea.  Umerov is facing criminal charges under Russia’s notorious ‘extremism’ legislation, effectively for openly stating that Crimea should return to Ukraine.  The Deputy Head of the Mejlis has been imprisoned for almost 18 months, and the Mejlis itself, despite being a self-governing body of the main indigenous people of Crimea has been banned.

Amnesty International has launched an Urgent Appeal.  It asks people to write to the de facto prosecutor Natalya Poklonskaya and Russian-installed head Sergei Aksyonov, urging them to establish and reveal Ibragimov’s whereabouts.  If he is being held incommunicado, call for his immediate release, unless he is charged with a recognisable offence, in which case he should have an immediate access to a lawyer.

It is Moscow, however, that pulls the strings in Crimea and pressure is also needed at higher level.   Please write to or tweet (using a dot before their twitter address makes it public) EU officials and politicians in your country asking them to publicly demand a proper investigation into Ervin Ibragimov’s abduction.  The same is urgently needed over the mounting number of arrests and ‘trials’ on concocted charges.

Russia is increasingly applying the terror and rights crimes seen, for example, in the Northern Caucasus.  It is now openly doing so in the illegally annexed part of another country’s sovereign territory and there seems every likelihood that things will get much worse unless real pressure is finally brought to bear.