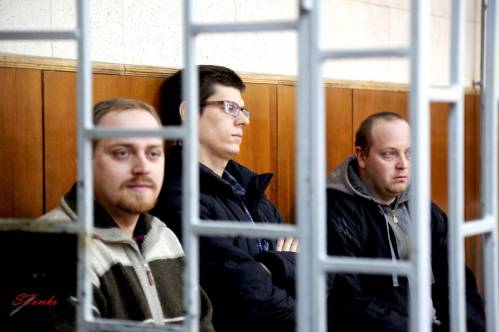 A trial which highlighted the total degradation of the justice system under former President Viktor Yanukovych has re-emerged in post-Maidan Ukraine, and so far, the authorities have failed the challenge it poses.   Although nobody is seriously planning to retry the men, court hearings have resumed with the judges even calling the men ‘defendants’.  The reason is depressingly banal: neither the courts nor the prosecutor’s office want to take responsibility for ending a case once called the most shameful in all independent Ukraine’s history.  Nor for holding those who played key roles in the torture and wrongful prosecution of the men to answer.

There remains an unsolved crime from July 28, 2010 when an explosion in a Zaporizhya church under the Moscow Patriarchate killed an elderly nun and caused extensive damage.  The explosion was probably the result of conflict over land, however no real investigation was ever carried out because of Yanukovych’s televised demand that the heads of the law enforcement bodies arrest ‘the culprits’ within a week.

The first young man Anton Kharytonov, a former sexton from the church was taken into custody around 10 hours after Yanukovych’s order, then his elder brother Serhiy Dyomin, and finally another sexton Yevhen Fedorchenko.  There were seven different ‘confessions’ which were all retracted when the men finally received access to lawyers.  Two of these ‘confessions’ were particularly telling.  Dyomin had been tortured into confessing to making the bomb, and there was even a video, made during the night-time interrogation, in which he hesitantly ‘explained’ how he did so.  The following morning, this was ridiculed by explosives experts and a new confession was extracted, in which Dyomin was supposed to have purchased the bomb from individuals whose identify remained “unestablished” to the end.

There was clear evidence that the men had given testimony under severe physical and / or psychological pressure.  This was later confirmed by two independent forensic psychological assessments.  The judge Volodymyr Minasov, who has retained his post to this day, simply ordered a third ‘assessment’ with that last contradicting the previous two.  The assessments had, by then, been publicized together with the transcripts of the interrogations, leaving nobody in any doubt that the first assessments had been correct.

On April 2, Minasov provided the 14 and 15-year sentences demanded by the prosecutor.  The appeal hearings in October that year came after considerable public attention to the case and initially inspired some optimism.  The judges asked all the right questions and clearly understood that the case lacked any evidence or credibility.

Nonetheless, on Oct 25, 2013, the Zaporizhya Court of Appeal, under presiding judge Yury Boikov upheld Minasov’s convictions, only reducing each of the sentences by one year.

Then came Euromaidan and what is now known as the Revolution of Dignity.  On Feb 27, 2014, Ukraine’s Verkhovna Rada passed a law applying individual amnesties and total rehabilitation for each of 42 people recognized as political prisoners. That list included Anton Kharytonov, Serhiy Dyomin and Yevhen Fedorchenko, and on March 14, 2014, after over three years in custody, the men were finally released.

Cassation appeals had, however, been lodged in October 2013, as soon as the sentences came into force, and these were finally reviewed in March 2015.  The High Specialized Court in Kyiv quite correctly revoked all previous rulings.  Unfortunately, it then “sent the case back for new court review” and that was where the men’s new post-Maidan torment began.

The law on their full rehabilitation remains in force.  They have not been recharged, nor can they be since Ukraine’s Constitution specifically prohibits retrying people on one and the same charges.  Yet the men are being forced to attend court hearings at which they hear themselves again called ‘defendants’.

The initial court hearings at the same Zhovtnevy Court where they were tried have all ended with the judges withdrawing because they had taken part in the original hearings.   An application was then sent to the Court of Appeal which passed the case to the Komunarsky Court.   At a preliminary hearing on May 26, a panel of judges allowed the application from the men’s lawyers and ordered that the case be returned to the prosecutor’s office.

It is sadly ironical that the new prosecutor of the Zaporizhya oblast, Oleksandr Shatsky was one of the relatively few people who spoke out in defence of the three men from the outset.  He now heads one of the bodies directly implicated in the men’s wrongful prosecution and clearly wants somebody else to take responsibility for putting an end to the shameful affair.

He has therefore appealed against the Komunarsky Court’s ruling and wants the case to be returned to them.  The appeal is due to be heard on August 17, with the demand being that the court finally ‘convicts’ or ‘acquits’ the men.

Shatsky’s position appears untenable since the men are not defendants and cannot be tried on the same flawed charges.  Certainly the men’s lawyers will be arguing that it is now for the prosecutor to withdraw the original indictment against the men.

This, in fact, reads as an indictment against Ukraine’s judicial system, with the prosecutor’s refusal even now to withdraw the charges a disturbing statement about what has not yet been achieved.