Pavlensky says he will not pay fine after his unexpected release 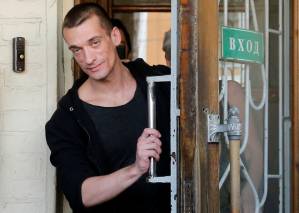 A Moscow court on June 8 rather unexpectedly released Pyotr Pavlensky from custody, after finding him guilty and fining him for damaging what was referred to as a ‘site of cultural heritage’, namely a door to the FSB building on Lubyanka Square.  He was ordered to pay a steep 500 thousand rouble fine and was reported to have said later that he does not plan to do so.

Considering the number of Russians who are serving prison sentences for no more than criticizing Russia’s invasion of Crimea or similar on social networks (such as Rafis Kashapov, Andrei Bubeyev), there had seemed little reason to expect clemency.  Pavlensky, a performance artist, set fire to the door last November and had been in detention ever since.

There was obviously a decision from above over this case, since the prosecutor had only asked for a fine, despite widespread expectation that Pavlenksy could be sentenced to up to 3 years.  Certainly Pavlensky’s case was widely reported, and there were a huge number of journalists present, but this has not stopped other manifestly repressive sentences.

Pavlensky had doused the door of the FSB building with petrol and set fire to it in a ‘performance’ which he called ‘Threat’, entitling an accompanying video ‘Lubyanka Door Burning’.

Lubyanka Square has been the terrible home to the Soviet and now Russian security service since the early days of the USSR and the underground corridors beneath it were used for torture.  Pavlensky wanted to highlight the campaign of terror which the FSB is waging against Russian society, he explained.

He told journalists that we have seen how it is possible to systematically destroy culture and then claim to be a monument of culture.  He called on people to be vigilant and active, saying that otherwise this prison of our everyday life could literally turn into a prison for each of us.