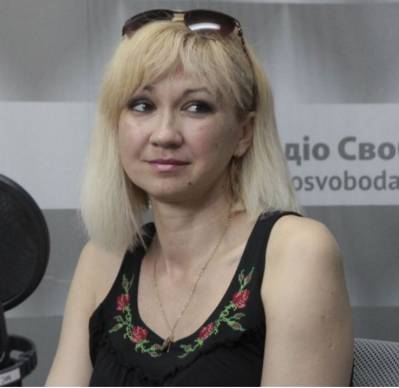 Ukrainian volunteer Natalya Vashchenko advises any Ukrainians travelling to Russian-occupied Crimea to be extremely careful, to avoid any comments on social networks or unnecessary conversations.  Her advice is well-worth heeding, since she was recently forced to return to mainland Ukraine after the Russian FSB carried out a search of her mother’s home which she was visiting, took her away for questioning and openly threatened her with imprisonment.  She has now learned that criminal proceedings have been initiated although there is no information as to the specific charges.

The young woman has lived in Dnipro [until recently called Dnipropetrovsk} for several years, though she contains to have Crimean registration.  Late in May she travelled to Kerch in Crimea to visit her mother.  She told the Crimean Human Rights Group that she had been at her mother’s home for a few days when the FSB turned up at around 8 a.m. on June 2.  There were six officers, one of whom showed FSB identification and a search warrant.  Vashchenko says that the men threatened to break down the door and to shoot her dog.

After searching the entire premises, the FSB men took her laptop and her mother’s, as well as the hard disks from an old computer that doesn’t work anymore.  The men also found two souvenir chevrons, one of them from the Ukrainian Insurgent Army [UPA] and a small flag of the ultra-nationalist ‘Right Sector’.

They then took her away to the FSB.  She says that they did not hand her any documents regarding the search or her detention, simply insisted that she went with them.  She was held at the FSB for over two hours and questioned.  They wanted to know whether she had been at the area in Donbas of military action; why she was caring for the wounded in a Dnipro hospital and why she had Ukrainian soldiers from Crimea as Facebook friends.  They also grilled her on how she felt about “Crimean now being Russian”.

“They threatened me with prison, saying that they felt sorry for my mother who’d have to visit me.  They asked if I have other relatives who’ll have to care for my mother, and forced me to write an ‘explanation’”.

They also told her that she could not leave Crimea, though did not provide any documents to this effect.  They said that they would return the computers within 10 days, adding that during that same period they would also determine her “further status”.

Not surprisingly, Natalya Vashchenko has left Crimea and will understandably be fearful of returning.

Her advice to others was given in a Radio Svoboda interview.  “Don’t take any gadgets with you, close social networks or even delete pages, i.e. ensuring maximum security.  Behave calmly, enjoy the sea and nature, try not to have any conversations which could even provoke a neighbour to denounce you. The main thing is – do not take any information, neither physically on you, or on memory drives”.

Olga Skripnik from the Crimean Human Rights Group clearly sees nothing exaggerated in such advice.  She believes it quite possible that Vashchenko could have ended up facing prosecution on ‘terrorism’ or ‘spying’ charges with the souvenir chevron and photos in social networks from a Ukrainian military hospital.  She too warns any Ukrainians in Crimea or visiting  to be extremely careful what they post on social networks. 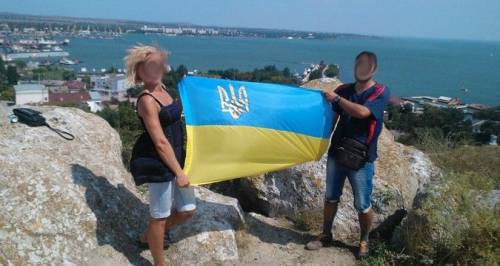 How little is needed can be seen from the photo that Vashchenko posted on social networks.  She and friends took photos of themselves with the Ukrainian flag on Mount Mithridat on the eve of Ukrainian Independence Day last August.  The photos were widely circulated on social networks.  They now have the faces obscured for reasons that are all too clear.  There have already been a number of prosecutions over the Ukrainian flag.

News of the FSB search and threats came just a day after Ukrainian Andriy Kolomiyets was sentenced to 10 years under Russian law in occupied Crimea.  The charges were absurdly implausible in any case, but chillingly so as they pertained to Euromaidan in Kyiv over which a court under Russia could have no jurisdiction.  The Crimean Human Rights Group has warned that a photograph on Maidan is enough to get you arrested in the Russian Federation or Crimea.  Tragically, no more is needed to get a 10-year prison sentence.