Ukraine did it! LGBT Equality March passes without major problems 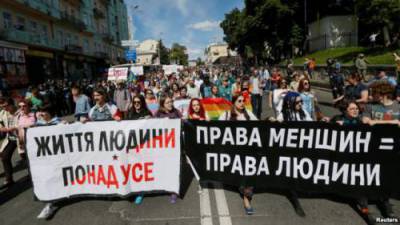 For the first time, a planned Gay Pride march has taken place in the very centre of Kyiv with few incidents.  On a day so darkened by the massacre in Orlando, Florida, this may seem a small thing, but for Ukraine it was a major achievement.  Whatever people’s opinions were of the event, and these remain very divided, there could be no excuse for the violence and aggression seen in previous years.  Nor for court bans on such marches, citing the likelihood of counter-demonstrations, confrontation, etc.  It is for the police and authorities to prevent clashes, and this year  they did so. 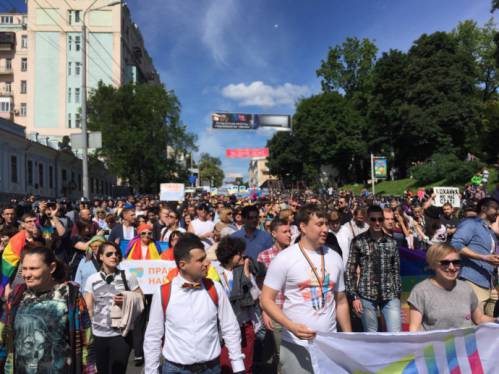 The march had been announced in advance, with no conspiracy needed for safety reasons as in previous years, and the police were out in force with around 6, 000 officers adequately controlling the situation.  According to the police, 57 people were detained before or during the march.  There are reports that two participants were later beaten up, with one receiving injuries of medium severity, but as yet there are no further details.

The relief is enormous especially given worrying statements in advance made by the far-right Right Sector and others, with Artem Skoropadsky from Right Sector having warned that there would be bloodshed.

Several Ukrainian MPs were present, as well as European Parliament deputy Rebecca Harms and others.

There are varying estimates of the numbers present, with these ranging from one to two thousand.  Even the smaller number was surely a record.

Anna Sharyhina, Director of the Kyiv Pride 2016 Forum, pointed to key differences between the march this time and earlier, particularly stressing the strong cooperation with the city authorities and police.

On his Facebook page, civic activist Bohdan Hloba thanked the many heterosexual people who had come out on the march “for those thousands of LGBT who had been afraid and had not come”.

Let’s hope that those who were afraid will be willing to come out next time, and will be able to do so safely.

There were, after all, grounds for fearing even without the threats from certain quarters.

The route to be taken on last year’s Equality March in Kyiv was not revealed in advance with reason.  The police were present in adequate numbers and in fact, during the march, it was five officers who sustained injuries, in one case nearly fatal.  A serious failing that appears to have been rectified this year was in anticipating dangers after people had left the march.  In 2015 10 people were attacked after the 300 or so participants - and police - had dispersed..

The relative impunity for those attacking such marches remains a problem.  Thus far only four men have been prosecuted for the attacks in 2015, and all received 2-year suspended sentences.  No hate crime component was taken into account and the defendants were deemed to deserve a milder sentence for their ‘sincere remorse’.   Ukraine’s Gay Alliance pointed out that the men had consistently denied any guilt, and that even after agreeing to cooperate with the prosecutor and admit guilt, the four men had openly demonstrated their intention to continue combating what they call ‘homopropaganda’.

There were people with banners along the route of the march, opposing the march and what they called ’propaganda of homosexuality’, but there do not appear to have been any serious clashes. The issue does, however, remain one that divides Ukrainians, with many also asserting that such marches are inappropriate in the face of continuing aggression from Russia.  Given the information war element of that aggression, it is worth noting that the pro-Kremlin media in Russia concentrated almost solely on reports of arrests, etc. in Kyiv.  It is possible however that any subject involving conflict was used as they assiduously avoided or distorted coverage of the previous evenings appalling attack by Russian football fans in Marseille.