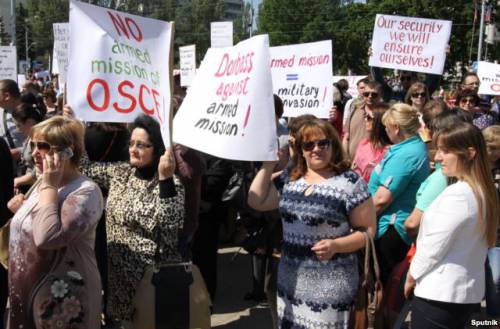 What conceivable arguments could there be against an armed OSCE mission helping to ensure peace in Donbas?  When there are none, except the lack of any intention to stop the war, you bring out “tens of thousands” of protesters, on fear of losing their jobs if they don’t appear.  Judging by a report from Deutsche Welle, such stunts may even work.

According to Deutsche Welle, it’s not Russia or the militants in Donbas who are the stumbling block, it’s the locals. “Russia has agreed to allowing armed OSCE monitors at specific sites in conflict-hit eastern Ukraine. But in the rebel stronghold of Donetsk, protesters vowed to protect themselves.”

Denis Kazansky, an exiled Donetsk journalist, had less difficulty understanding the widely circulated photos of the anti-OSCE demonstration on June 10.  You look at the photos, he says, and you understand immediately that the participants were there because they were told to be.  The photos, the well-prepared signs in English, etc. do indeed make that clear, but there is also confirmation from a person writing a letter on Radio Svoboda. 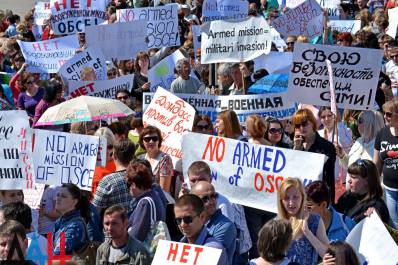 Anna Budinskaya (almost certainly a pseudonym) writes that the ‘protesters’ were there under threat of dismissal.  Public sector workers are forced in this way to even attend local concerts.  In her native Yenakiyevo, she says, they were first all forced to sign a call for implementation of the Minsk Agreement, then ordered to attend a rally in Donetsk “against an armed OSCE mission”.

She was prompted to write about this occasion because of certain comic elements, particularly the fact that the orders about the ‘protesters’ demands’ kept changing.  For those who couldn’t get out of it, at least coaches were laid on.  They were, however, accompanied by police officers “presumably so that we didn’t run off.  We were outraged, but said nothing.  There were several denouncers from the ‘Donetsk republic’ civic organization on the coach.”

There were also armed patrols, everywhere, she says. “Not OSCE, of course.  From their accents, it was clear they were Russian”.

The crowd had been brought in, but no provisions made for them.  There were no ambulances, and she mentions a couple of people fainting.  Only one bio-toilet to be seen anywhere.   It was extremely hot, but when people tried to hide in the shade, they were pushed out onto the square.

No arguments as such were provided, only banners reading “We’ll ensure our own security”.

Kazansky points out that an armed OSCE mission could really stop the war.  Even those who genuinely believe that the constant shelling is from the Ukrainian government side should understand that Ukraine would not shoot at representatives of an international organization.

“But the Kremlin doesn’t want the war to stop now.”  It therefore ordered the leaders of the so-called Donetsk people’s republic [DNR] to get people out onto a demonstration and to continue the shelling, Kazansky adds.

The Donbas residents will have to come out with different banners when they really want to stop the war, he says.  For the moment, the anger over the constant shelling is expressed on Facebook pages.    These will often be under pseudonyms, although here it is possible that Kazansky quotes without providing links in case the authors could be easily identified by the militants.

OSCE monitors have also repeatedly heard complaints from Donbas residents that the militants are using the roofs of people’s homes to shell Ukrainian positions, this provoking defence fire.

Such complaints are probably one of the reasons why the staged demonstration on June 10 was not the first such orchestrated demonstration against the OSCE.  Last year there were similar stunts in both the ‘DNR’ and the so-called Luhansk people’s republics against the OSCE and foreign humanitarian NGOs, including Medicins sans Frontiers. They were driven out despite the clear suffering this would cause the population.

Ukraine has consistently called for a full UN peacekeeping mission to Donbas and stated in recent days that it holds the UN accountable for failure to provide this.  Russia and its proxies in Donbas have found various ways of obstructing this.  None, given the ongoing shelling and the suffering caused the people of Donbas equals in cynicism the orchestrated demonstrations claiming they want to “protect themselves”.