Freed Ukrainian Political Prisoner: Sanctions Against Russia Must Continue to Free Others 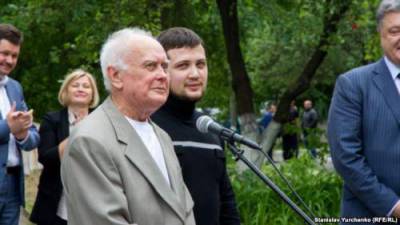 74-year-old Yury Soloshenko, the oldest of the men taken prisoner in Russia during the months after the invasion of Crimea and military conflict in Donbas, is finally back in  Ukraine.  He and Gennady Afanasyev, who was tried on the same fabricated ‘terrorism’ charges as Ukrainian filmmaker Oleg Sentsov were exchanged for Yelena Glishinskaya and Vitaly Didenko, who had been in custody for around a year on separatism charges over their role in a Russian-sponsored so-called ‘People’s Council of Bessarabia’

In their first address after arriving back in Ukraine, both men spoke of their gratitude for the support they had received.  «You can’t imagine what it’s like after something like that to return home”, Soloshenko said, adding: “We must do everything so that those of our citizens who are now in Russian prisons can also return home.  They also hope for your help, and I believe that they will be with us”.

Gennady Afanasyev also spoke of the need for the West to continue sanctions.  The sanctions, he is convinced, made it possible for him to return home.  “I went through torture and pain and saw how others were subjected to that.  I would ask you to not reject sanctions, to continue that policy and not change anything.”   That way, he said, there was hope that Oleg Sentsov, Oleksandr Kolchenko and others would also be returned.

Interfax reports that both Soloshenko and Afanasyev are to undergo hospital treatment in Kyiv.  Soloshenko was diagnosed months ago with cancer, while Afanasyev is suffering from a blood infection which was not properly treated.

Negotiations have clearly been underway for a couple of months now, with both men brought to Moscow, initially without any indication of why.  At the beginning of June another of the four Crimean opponents of annexation – Oleksiy Chirniy – was also brought to Moscow where he is officially undergoing another psychiatric examination.  Russian human rights activist Zoya Svetova has suggested that this could be part of a plan to declare him mentally unfit and return him.  Worryingly, however, there is no mention at all of a possible release of Oleg Sentsov and Oleksandr Kolchenko, nor of other prisoners held in Russia or Russian-occupied Crimea.  Some of the prisoners held in Russia, including Sentsov and Kolchenko, are officially part of ‘extradition procedure’, however this can go on for at least a year, and also officially requires guarantees that the men will serve the sentences in Ukraine.  Since the sentences are monstrously long and politically motivated, this is impossible.

In her last annual report for 2015, the outgoing Russian Human Rights Ombudsperson Ella Panfilova recommended that Soloshenko be pardoned and returned to Ukraine.  It has taken until mid-June for the Russian authorities to release him, and then as part of an exchange.

Svetova wrote back in April 2015 that in all her years of visiting people held in Russian prisons she had never seen such flagrant violation of Russia’s Constitution as in Soloshenko’s case.   The most cynical abuse of his rights was seen in the situation with his lawyer.  The investigators simply prevented human rights lawyer Ivan Pavlov from seeing his client, while simultaneously putting pressure on Soloshenko to accept the ‘lawyer’ – Gennady Blokhin – whom they proposed.  Blokhin seems to have merely encouraged him to ‘confess’, promising that he would be returned to Ukraine.

Soloshenko is the retired director of a long-bankrupt factory which had once specialized in high-frequency electro vacuum lamps used in anti-aircraft warfare.  There could have been no question even then of ‘spying’, since the factory had always depended for its survival on orders from Russia, meaning that there was nothing secret between the two countries, with it all a single system.  Yet he was seized while visiting a colleague in Moscow in August 2014.  Over a year later, on Oct 14, 2015, the 73-year-old with no access to state secrets or Russian weapons, but also with no access to a proper lawyer, ‘confessed’ to bizarre spying charges and was sentenced to 6 years’ maximum security prison.  This was less than the prosecutor demanded, but presumably all that the judge could oblige him with given Soloshenko’s age.

The 26-year-old Crimean’s mother Olha Afanasyeva has already arrived in Kyiv to meet her son.  She had been one of the driving forces in ensuring that the four men’s case is not forgotten.

Afanasyev, like Oleg Sentsov, civic activist Oleksandr Kolchenko and historian Oleksiy Chirniy, made no secret of their opposition to Russia’s invasion and annexation of Crimea in February – March 2014.

All four were arrested in May 2014, and held incommunicado for weeks before being taken to Russia.  There on May 30 the FSB [Russian Security Service] claimed that the four men had been involved in a ‘Right Sector terrorist plot’.  There was no evidence that this ultra-nationalist movement which Russia was demonizing had any presence in Crimea at all, nor that the men were involved in it.  In Kolchenko’s case, the mere suggestion was absurd since he is a left-wing anarchist.

The case entirely hinged on the two ‘confessions’. For (initially) agreeing to ‘cooperate’ with the investigators, both Afanasyev and Chirniy were tried separately and received the minimum – 7-year - sentence for ‘terrorism’.  Afanasyev did take part in two firebomb incidents against the empty premises of organizations directly helping Russia’s seizure of control in Crimea, while Kolchenko was involved in one.  Memorial has examined the charges and points out that they in no way constitute terrorism, and that similar offences in Russia have been classified as hooliganism and resulted in significantly shorter sentences.

On July 31, 2015 Afanasyev took the stand at the trial of Sentsov and Kolchenko.  Instead of refusing only to testify, as he’d been instructed by the FSB, he also retracted all previous testimony, stating that it had been obtained through torture.  On Aug 19, 2015, Memorial also declared Afanasyev a political prisoner.

Russian human rights defenders condemned the trial of these men, calling it “ideologically-motivated state terror” against opponents of Russian occupation of Crimea.

OTHERS ARE STILL IMPRISONED!

It is imperative that pressure is stepped up on Russia.  The number of politically-motivated arrests and sentences in Russian-occupied Crimea is actually increasing. Please help ensure that demands are heard for the release of each named prisoner!

See the following for details and indications of how to write to the men.

Oleg Sentsov and Oleksandr Kolchenko are still held in prisons thousands of kilometres from their home.  Both have been sent to the furthest ends of the Russian Federation to try to minimize contact with them.

Like Soloshenko, Valentin Vyhivsky was also charged with spying, and sentenced to 11 years after a secret trial.  In his case, he almost certainly pleaded guilty because of the torture he was subjected to, with no proper lawyer present to defend him. He has been prevented from seeing even his own mother without guards present who stopped him talking about anything remotely connected with his ‘case’.

The concerns are the same with regard to  Viktor Shur  He is a Russian national, but has lived in Ukraine for many years and has a Ukrainian family.  There was quite simply no possibility of his spying, yet he is now serving a 12-year-sentence.

Memorial HRC has declared Ukrainian Serhiy Lytvynov a political prisoner and called the cowherd from a Luhansk village near the border with Russia a victim of “the Russian-Ukrainian conflict”, who was used for propaganda purposes.  The 33-year-old has been held in Russian detention since August 2014 and was initially tortured to extract ‘confessions’ to fictitious war crimes.  His lawyer did not merely prove that Lytvynov had not committed the crimes, but that the alleged crimes had not taken place.  Nor could they have since the people mentioned and their addresses were simply made up.  Having held Lytvynov in custody for a year, Russia then came up with new criminal charges which were openly absurd.  Despite these also being demolished in court, Lytvynov was sentenced to 8.5 years’ imprisonment.

In custody or already sentenced in Russian-occupied Crimea

Andriy Kolomiyets was convicted on June 10 of attacking Ukrainian Berkut riot police officers in the centre of Ukraine in January 2014 and sentenced to 10 years’ imprisonment.  Please see: Ukrainian Gets 10-Year Sentence in Russia’s Revenge for Maidan

14 prisoners, almost all Crimean Tatars, facing fictitious ‘terrorism’ charges over alleged involvement in Hizb ut-Tahrir, an organization which is legal in Ukraine and which Russia has never properly explained why it is banned.