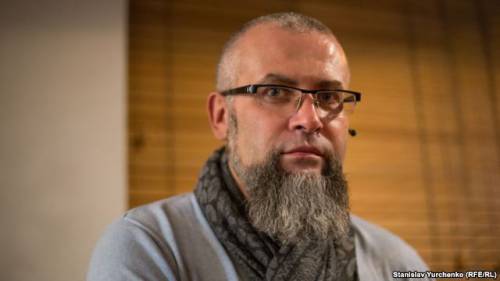 As initially reported, his colleagues immediately issued a statement over Salov’s arrest, saying only that it was linked with his journalist work in Vladimir (Russia) 6 years ago.  “Alexei was not frightened to speak the truth, sometimes even unpalatable or inconvenient for some.  This was obviously not to the liking of everybody in the region.”  The editorial team hopes that this is a misunderstanding which will be resolved shortly.  They promise that they will do everything to defend the good name of their colleague and ensure that justice prevails.

Salov began and headed Argumenty Nedeli – Krym back in 2012.  The publication was known for its hard-hitting material about those installed in control by the Viktor Yanukovych regime.

Viktoria Veselova, writing for Krym Realii reports  that the publication was forced to accept Russian jurisdiction after annexation and that some propaganda did appear on its site.  It has remained effectively the only publication remaining in Crimea which honestly reports, for example, the offensive against the Crimean Tatar Mejlis [representative assembly], armed searches of Crimean Tatar homes, etc.

The publication recently provided invaluable accounts of the ‘court hearings’ on banning the Mejlis.

This in itself would be grounds for concern that the arrest of Alexei Salov, two years after Russia invaded and annexed Crimea, may be an attack against an independent media source, the only one not driven from the peninsula.

There are other disturbing details.  Veselkova has ascertained that Salov was seized by police officers in a Simferopol café and that Anastasia Medyntseva from the pro-Kremlin Komsomolskaya Pravda just happened to be present.

Within 40 minutes, she had provided a report describing the alleged offence Salov was charged with back in 2012.

Medyntseva’s report claims that Salov had been on the run from the Russian authorities since 2012.  At that time, he was in charge of the local branch of the Russian Argumenty Nedeli in Vladimir.

The Komsomolskaya Pravda correspondent simply repeats, as though undisputed, the charges on which he was convicted.  He is supposed to have tried to blackmail an MP from the ruling United Russia party, threatening to reveal damaging information if he wasn’t paid 50 thousand roubles monthly.

He was convicted of this by a court in Vladimir and sentenced to one and a half years in a minimum security prison colony.  Salov instead left for Ukraine.

In Medyntseva’s rendition: “He immediately went to another country – to Crimea (then still Ukrainian). In 2014 Crimea became Russian. And nobody forgot about him.  The time simply arrived”.

And Medyntseva just happened to see this all unfold.

She initially claimed that he had been on the international wanted list, but corrected this after people checked and found it to be untrue.  She now says he was on the federal wanted list.

This may or may not be true.  There have been a number of cases in Russia, for example, that of the environmental activist Evgeny Vitishko, where courts have found journalists or activists guilty of crimes after they exposed illegal behaviour by local politicians.

Certainly in the conflict between Salov and the United Russia MP Grigory Anikeyev, Salov denies any guilt and calls the prosecution political persecution.  The fact that even the appeal court only reduced the sentence to 1 year, but upheld the sentence probably means little when a journalist is in conflict with an MP from the ruling party.  At the time, the media pointed out that Anikeyev was an influential and very rich MP.

Salov has now been remanded in custody for two months and is likely to be sent to Vladimir where he could face a 2-year prison sentence.  What this will mean for the publication remains to be seen, but there do seem grounds for viewing all of this as yet another attack on the media.

Since Russia’s invasion and annexation of Crimea, most independent journalists have left for mainland Ukraine, and with cause.  One of those who remained,  Mykola (Nikolai) Semena is now facing criminal charges of ‘separatism’ over an article he allegedly wrote.

There have been other attempts to charge Crimean journalists over similarly cynical charges, but against journalists already living in mainland Ukraine.  There is one blogger Yury Ilchenko who has been in detention since July 2015, almost certainly over texts in opposition to Russia’s occupation of Crimea.

Russia appears to have backed off from its announced plan to block Radio Svoboda’s Crimean Service, which Semena sometimes wrote for, but in October 2015, the Russian censor Roskomnadzor blocked two resources. Both Sobytiya Kryma [Events in Crimea] and the Centre for Journalist Investigations were accused of publishing “contains calls to mass disturbances, extremist activities or participation in mass (public) events carried out with infringements of established procedure”.

Most Crimean Tatar and Ukrainian language media were simply forced out of Crimea.

In its 2015 Freedom of the Press report, Freedom House wrote about Crimea under Russian occupation separately – and damningly -  as one of the ten “worst of the worst”.  It was rated at 94 on a scale to 100 (where 100 is the worst), against Russia at 83, and Syria and Iran at 90.  Mainland Ukraine was at 58.