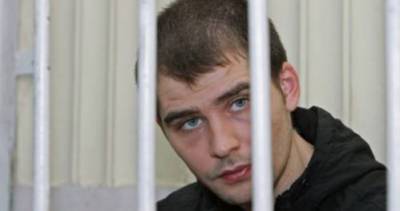 Like all texts about Ukrainians in Russian court hearings, this one must begin with ‘as expected’.  The decision is no less galling for being predictable, since the court in Kirov on June 16 ignored not only the fact that Russia is illegally holding Oleksandr Kostenko in prison, but the Russian Supreme Court’s guidelines on parole.  Nothing, it seems, matters if the order has come to convict a person and then make sure he serves the sentence to the end.

Dmitry Sotnikov, Kostenko’s lawyer reports that the prosecutor had made no pretence of preparing for the court appeal.  The judge clearly also saw no need to seriously consider the appeal lodged against the refusal to grant Kostenko early release on parole.  The judge simply claimed that the original ruling had been lawful and rejected the appeal.

It had not been lawful and, as Sotnikov points out, actually breach Russia’s Constitution which makes guidelines from the Supreme Court mandatory on the court.  In Kostenko’s case, these guidelines, which reject the reasons provided for refusing parole, have now been flouted twice.

The ruling on April 13 had rejected the parole application citing Kostenko’s denial of legally absurd charges pertaining to something that had allegedly taken place between two Ukrainian nationals in Kyiv!).  It also pointed to the fact that he had been placed in a punishment cell, but ignored the flimsy pretext for a severe punishment (Kostenko was alleged to have not greeted a prison official).  The court also noted in its decision that Kostenko had been placed on a ‘prophylactic register as a person studying, propagating, preaching or spreading extremist literature’.  This was despite the fact that during the court hearing, a prison official had been unable to give any sensible reason for Kostenko being on this list.

The court on June 16 acknowledged and even added to the file the formal note issued by Ukraine’s Embassy in Russia over the April 13 refusal to grant parole. The Embassy had pointed to clear flaws in the April 13 ruling, Kostenko’s health problems and to family circumstances, asking that the appeal be given due consideration.

Oleksandr Kostenko is a Ukrainian citizen sentenced by a Russian-occupied Crimean court to 4 years’ imprisonment over an unprovable offence which allegedly took place during Euromaidan in Kyiv, well before Russia invaded and annexed Crimea.  The court ignored the evidence that his first ‘confession’ had been tortured out of him, and flagrant infringements of procedure from the moment of his arrest.  Subsequent appeals have slightly reduced the sentence which now stands at 3 and a half years.  He has been in custody since Feb 5, 2015.

The Ukrainian Euromaidan activist was convicted of slightly injuring a Ukrainian Berkut riot police office in Kyiv on Feb 18, 2014.  Even if Russian-occupied Crimea had had the jurisdiction to carry out such a prosecution, the charges were also comical in their absurdity.  He was, nonetheless, found to have deliberately aimed a cobble stone at the Berkut officer who had suffered a bruise on his left shoulder as a consequence.  Kostenko was supposed to have been motivated by “a feeling of ideological hatred and enmity to law enforcement officers”.

This was Russian-occupied Crimea’s first trial over alleged ‘crimes’ during Ukraine’s Euromaidan and based solely on the testimony of former Ukrainian Berkut riot police officers who breached their oath to Ukraine and are now working for Russia.  There has now been a second such trial, which ended on June 10 with 22-year-old Andriy Kolomiyets sentenced to 10 years’ imprisonment (see:  Ukrainian Gets 10-Year Sentence in Russia’s Revenge for Maidan).  The so-called Crimean prosecutor Natalya Poklonskaya has threatened more of these lawless ‘prosecutions’ in which neither jurisdiction, the law or pure common sense are deemed of any importance.