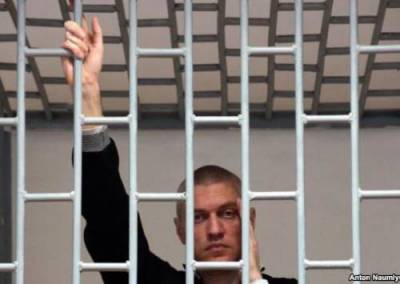 The 10 months in which Ukrainian Stanislav Klykh was illegally held and tortured by Russian investigators, with no access to lawyers or to his family, have left deep psychological, as well as physical scars on the 42-year-old historian.  It is his clearly disturbed state which makes the new ‘investigation’ against him particularly cynical.

Klykh is now facing prosecution for “contempt of court” after a psychiatric assessment claimed nothing untoward about his mental state.  Hearings had been adjourned and the assessment ordered in January because of Klykh’s obviously distressed state and inadequate behaviour in court.

There had been no earlier investigation into both men’s allegations of torture, including, in Klykh’s case, the application of psychotropic drugs, nor any independent psychiatric assessment.  His lawyer Marina Dubrovina had sought a psychiatric investigation from the outset, but any checks carried out were totally perfunctory (details here).  The ‘examination’ by the Russian prison service’s psychiatrists in January resulted in Klykh receiving an improbable clean state of health and then being forcibly administered unidentified drugs. These were probably heavy-duty tranquilizers, but his lawyer’s attempts to ascertain their nature were fruitless.

Dubrovina has told Radio Svoboda that the new investigation has commenced with Klykh being presented with a linguistic assessment of his words in court.  These have been deemed ‘insulting’.  Klykh reacted to attempts to interrogate him over this by denying that he had used the words, and citing his right to not testify against himself (under Article 51 of the Russian Constitution).

Meanwhile Dubrovina has applied for Klykh to receive a proper psychiatric assessment in hospital.

If found guilty of this new charge, Klykh would be fined, ordered to do compulsory work or imprisoned for up to four months.  The same judge Vakhit Ismailov tried to bring such charges against the then still imprisoned Nadiya Savchenko’s sister, Vera. She was even initially declared on the ‘wanted list’.   Ismailov has also initiated a serious attempt at reprisals against Dubrovina and Karpyuk’s lawyer Dokka Itslayev.

Klykh and Mykola Karpyuk were recently sentenced to 20 and 22.5 years’ imprisonment, respectively, in what Zoya Svetova, a prominent rights activist,  has called  “one of the most insane and monstrously falsified prosecutions initiated against Ukrainian nationals since the annexation of Crimea”.

Russia claimed that Klykh and 53-year-old Karpyuk had (together with Yatsenyuk, Yarosh, etc.) taken part in fighting in Chechnya 20 years ago and that during battles in Dec 1994 and Jan 1995 they had killed a number of Russian soldiers.   Karpyuk was accused of creating and leading a band called ‘Viking’ and Klykh of taking part in it.  The case was entirely based on their ‘confessions’ extracted during the 18 months that Karpyuk was held totally incommunicado and without proper lawyers, and 10 months in Klykh’s case.  This is backed by provably wrong testimony provided by a Ukrainian national Oleksandr Malofeyev already serving a 23-year sentence and directly dependent on the Russian prison authorities for life-saving medication.

Of the 30 Russian soldiers who really did die, 18 were killed in another place altogether, and a further eleven were not killed by gunfire, as the prosecution claimed.   Only one man had died, as per the prosecution’s story, of gunfire, but not from the type of gun that the investigators claim was used.