How can Ukraine turn away friends fleeing persecution in Russia? 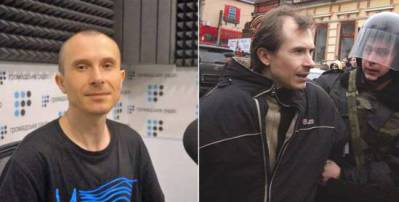 Alexei Vetrov now and during a protest in Nizhny Novgorod (left photo from Hromadske Radio, right posted on Ukrainska Pravda)

While Ukraine’s leaders actively protest against Russia’s political trials of Ukrainians, politically motivated charges against Russian nationals are cited as reasons for rejecting asylum requests.   Neither the migration service nor the SBU [Security Service] have reformed at all since Euromaidan, with this most acutely seen in the treatment of the Kremlin’s critics.  This includes the SBU’s ongoing detention of two Russian nationals – Olga Sheveleva and Pavel Pyatakov and attempt to hold Anastasia Leonova – on seriously questionable grounds, as well as the detention in Poltava pending possible extradition to Russia of two Chechens whose work helping victims of the war in Ukraine would itself put them at risk in Russia.

It is also extremely difficult to receive refugee status in Ukraine, as Russian civic activist Alexei Vetrov can confirm.  Despite very clear evidence that he faces politically motivated prosecution and likely imprisonment in Russia, his application for asylum in Ukraine has now passed through all stages, with the rejection finally.  He is protected from deportation only because he has been recognized as a mandate refugee, requiring international protection, by UNHCR [UN High Commissioner for Refugees].

Ironically, 36-year-old Vetrov came to Ukraine because of Maidan.  In an interview last September, he explained that he had wanted to live in a country that aspires to democracy.  The country does, but you might not think it looking at the behaviour of its migration service and SBU.

Vetrov was, until 2010, a successful businessman with a number of shops selling electronic devices and mobile telephones in Nizhny Novgorod.  In 2010 the new mayor became a local ‘Mafioso’, and Vetrov’s business was increasingly plundered, with profits raked off by the local police, the prosecutor and mafia.  Vetrov said earlier that this made him understand that a regime which can’t protect business people who create jobs and pay taxes needs to change.  He first just took part in opposition protests, then helped organize them.

He was detained virtually at every protest, especially after the protests died down and smaller numbers of activists could be closely observed by the FSB.   After being taken away from a protest in Moscow, the police told him that he had been placed on the wanted list in Nizhny Novgorod and he decided to leave the country.  He says that over those several years of protest, they had not managed to bring out the sort of crowds that could have an impact on the country’s leaders.

Those friends who did remain are all facing either administrative or criminal proceedings.  Some decided, like him to come to Ukraine, a few have gone to other countries.

Vetrov had taken part in peaceful demonstrations – the right to which is enshrined in both the Ukrainian and Russian Constitutions.  The evidence of politically-motivated persecution was clear.  To everybody except Ukraine’s migration service.  Vetrov says that they would look at his documents, would see the word ‘hooliganism’, and decide that that’s what he had been prosecuted for.  This was their argument at two court hearings.  “The Ukrainian authorities do not believe it possible to disbelieve the Russian government”.

There has been plenty of evidence in the past of Ukraine’s SBU collaborating with its counterparts in Russia and Uzbekistan.  There is nothing at all to suggest that any of this has changed, despite Maidan and Russia’s aggression against Ukraine.

Vetrov stresses that the same people who automatically turned down applications during the regime of Viktor Yanukovych (and before) remain in their posts and are continuing the same practice now.

Vetrov holds no grudge against Ukraine as a country and its people.  The problem is with the authorities who do not obey their own laws and international agreements.  According to them, he should definitely have received refugee status.

Ordinary people have been quite different, he stresses.  He was put up when he first arrived by a person he knew only from Facebook, and since then many have helped him.  He is also helping others, as a volunteer for Donbas SOS, an initiative helping people displaced by the military conflict.

The situation with Vladimir Malyshev, another Russian national who was on Maidan, is much worse.  He unfortunately does not appear to have appealed against the migration service’s rejection and simply returned to Russia, though he was certain that he would be jailed.

His return to Russia came just months before the ‘trial’ and 10-year sentence passed in Russian-occupied Crimea on Ukrainian national Andriy Kolomiyets.  The 22-year-old was sentenced on insane and thoroughly lawless charges related to Euromaidan.  Ukrainian human rights activists have warned that a mere photo of somebody on Maidan can be used to concoct politically motivated prosecution in Russian-occupied Crimea.  Nor do you even have to be from Crimea.  Kolomiyets was arrested in the North Caucasus and is himself from the Kyiv oblast.

If you are a Ukrainian national, there will be protests over such persecution.  If you are Russian, beware – Ukraine’s authorities have still not understood

There can be no excuse for Ukraine to protest when Ukrainians face Russian political persecution, while effectively abetting Moscow in persecuting its own nationals, many of whom have faced repression for their support of Ukraine.