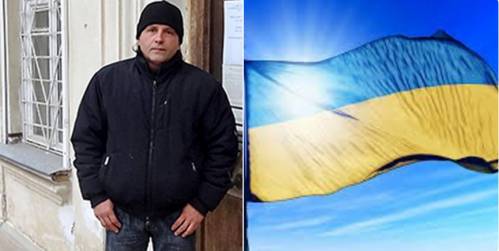 The good news that a court in Russian-occupied Crimea had revoked a politically motivated sentence against Volodymyr Balukh was short-lived.  The pro-Ukrainian activist has been tried on exactly the same absurd charges and received an identical sentence.

Compared with some of the cases of repression under Russian rule in Crimea, Volodymyr Balukh’s experiences are not the worst.  They do, however, as the Crimean Human Rights Group points out, indicate very clearly how little justice people with pro-Ukrainian stands can expect under Russian occupation.  The 44-year-old farmer from the north of Crimea had first raised the Ukrainian flag over the home he shares with his common-law wife in December 2013 during Euromaidan.  It was not removed after Russia’s annexation of Crimea which Balukh opposed.  He himself remains a Ukrainian citizen.

Balukh’s problems began on April 30, 2015.  Two men appeared while he was helping his mother at the other end of the village.  One was a police officer, the other from Russia’s FSB [Security Service].  They demanded that he come with them, but he refused, saying that he would only if there was a warrant.

Although they abandoned their tractor prosecution, they did not stop harassing Balukh.  In July 2015 he was detained for 72 hours for supposedly refusing to obey a police officer’s commands.  Once again, nobody worried too much about such subtleties as making a story hold together.  When, after 72 hours, he ended up in court, the judge fined him, not for such disobedience, but for supposedly drinking alcohol in a public place.

“It turns out, when they detain you, kick you around the kidneys and put their foot on your head, you’re supposed to express yourself solely using the language of Dostoyevsky, ” Balukh commented drily.

He was first sentenced to 320 hours’ mandatory labour on Feb 5, 2016 for this alleged ‘public insult’.

It transpired, however, that not all judges and prosecutors had totally forgotten their oath to serve the law.  The prosecutor D. Shmelyov asked for the sentence to be revoked and ‘the case’ sent for a new court examination, with this allowed by Judge A. Osochenko.

The new ‘hearing’ on June 10 reverted, unfortunately, to the lawless norm, with Judge M. Bedritsky passing exactly the same sentence as his colleague on Feb 5.  Worth noting that after the first sentence, Balukh pointed that Judge Tatyana Pyrzhalo had actually referred to the wrong testimony, not that presented during the trial.  There is no information available about which testimony was used the second time, but optimism is not high.