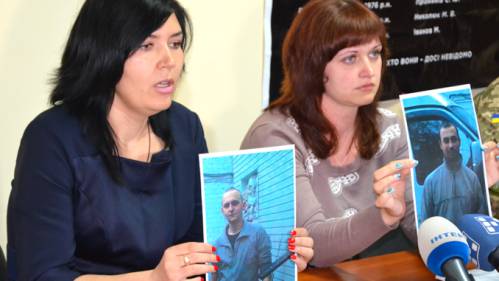 All talk about the possible removal of sanctions against Russia or their gradual easing in exchange for partial compliance must seem particularly insulting to the wives of two of the 120 hostages whom the Kremlin-backed militants in Donbas are still holding prisoner.  Their husbands – Oleksandr Korinkov and Serhiy Glondar – were captured during the siege of Debaltseve in February 2015, four days after a supposed ceasefire agreed by Russian President Vladimir Putin in Minsk.  The two men are Ukrainian military officers, whose exchange - also in accordance with the agreement reached in Minsk – has been consistently blocked by militants from the so-called ‘Donetsk people’s republic’ [DNR].

Serhiy Glondar’s wife Yekaterina learned that she was expecting the couple’s second child the day that her husband was taken prisoner.  He and Korinkov have now been held hostage for almost 500 days.

The two men are spetsnaz officers from Kirovohrad, who on Feb 16, 2015 were accompanying 7 other Ukrainian soldiers retreating from Debaltseve, a strategic railway hub which was finally taken by Russian and Russian-armed troops on Feb 18, 6 days after Putin agreed a ceasefire in Minsk.

There were 9 men altogether who were fired upon.  Two were killed, two seriously injured.  The latter were soon released by the militants.  Another two were handed over after 50 days, and one managed to escape.  Korinkov and Glondar were clearly viewed as ‘trophies’, to be used for hard bargaining.

The fact that the men were fired on while retreating was typical, but only part of the mendacity which Putin demonstrated.  The agreement on Feb 12 announced a ceasefire, yet within hours of this the Kremlin-installed DNR leader Alexander Zakharchenko and one of the chief commanders Eduardo Basurin both announced that they would not be observing it with respect to Debaltseve.   Basurin’s pronouncement was particularly telling: “Of course we can open fire. It’s our territory. The territory is internal: ours. And internal is internal."

Almost exactly a year later, Ruslan Leviev, a Russian blogger and head of the Conflict Intelligence Team (CIT) published evidence that, he believes, suggests that the order for the offensive on Debaltseve was issued by Putin himself. 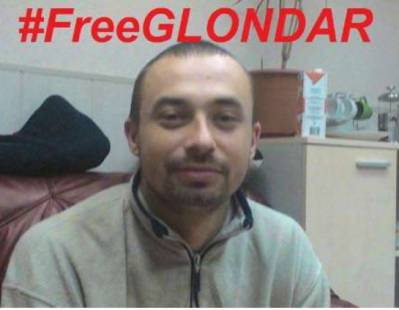 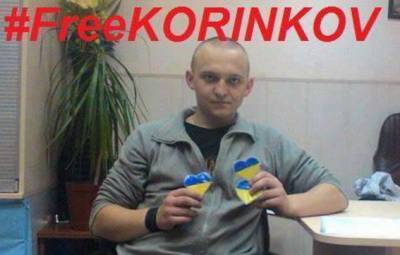 Yekaterina Glondar and Yulya Korinkova are desperate to secure the release of their husbands, and together with other relatives have held pickets outside the President’s Administration and parliament, as well as near the Russian embassy.  They are, perhaps understandably, bitter at the lack of progress and a recent interview for Hromadske Radio begins with a plea to President Petro Poroshenko to give them just 15 minutes of his time.   Yulya Korinkova believes that there are too many people in Ukraine who are failing to understand that a war has been waging for the last two years.  Her husband and Glondar were defending their country and they urgently need its help now.

Iryna Gerashchenko, an MP closely involved in the exchange process, and somebody from Ukraine’s Security Service [SBU] met with the two women after their protests at the end of March.  Gerashchenko told them that the main priority was to get the most severely wounded out, as well as those who’ve been there the longest.

This may be true, Yekaterina says, but there have been people released who were not in a bad state.  She also points out that her husband had clearly suffered head injuries, and almost certainly also needs treatment.  There is nobody in militant captivity, both women stress, whose physical and mental state has not been affected by their treatment.

Their husbands are at least able to phone around once a month, so they know that they’re alright.  However, they have recently been moved, and nobody knows where they are being held.

Another chilling fear is that they could be targeted for more of the militants stunts in which obvious hostages or POW are suddenly treated as criminals facing prosecution.  60-year-old religious expert Ihor Kozlovsky was seized by DNR militants at the end of January this year and has still not been released.  There have instead been claims that he is facing ‘charges’.

Yevhen Chudnetsov, a Ukrainian volunteer fighter from Makiyivka who is on Ukraine’s list for exchange was recently ‘sentenced’ to 30 years by the ‘DNR’ militants.  He was apparently charged with “an attempt to violently seize power on the republic’s territory”.  The news came around 14 months after Chudnetsov was captured and tortured into ‘confessing’ for Russian television.  The militants had bandied around threats that they might execute him (more details here).

Another person on the exchange list, and clearly in urgent need of rescue, is 45-year-old Yevhen Zhemchugov, who was maimed and blinded, probably after stepping on a mine.  Although he is in a shocking state, it seems clear that the militants from the so-called ‘Luhansk people’s republic’ also tortured him.  They have now ‘charged him’ with acts of sabotage and moved him from hospital to a SIZO or remand prison.  There are very real fears for his life (details here).

On June 18, Iryna Gerashchenko wrote that Ukraine had sent a letter to Germany as holding the presidency of the OSCE, with the letter addressed to Franz-Walter Steinmeyer, Germany’s Foreign Minister.  It asks the OSCE to assist in unblocking the exchange process.  She mentions that on June 17 they received disturbing information indicating that the militants are moving other hostages to SIZO and threatening them with 20-year ‘sentences’.

All of this, she says, is taking place against a background of public statements rejecting any releases until a highly contentious ‘amnesty law’ has been passed.

Such a law can only be adopted if Russia and its proxies keep to their side of the agreement.  Thus far there is no indication of any willingness to do so, and pressure on Russia needs to be intensified, not eased.