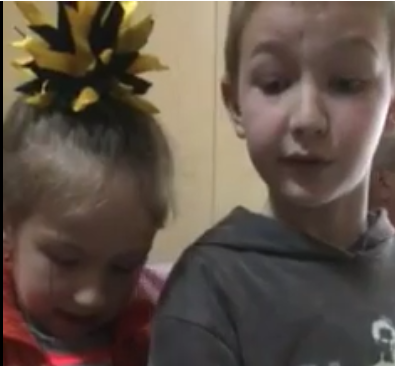 The children of Crimean Muslims imprisoned in Russian-occupied Crimea on fictitious ‘terrorism’ charges have been accosted and frightened by FSB officers who tell them that their fathers are in prison and will stay there.  The lawyer representing imprisoned human rights activist Emir-Huseyn Kuku calls such behaviour criminal and a formal complaint has been lodged.

The visit and grilling of Kuku’s 9-year-old son Bekir is by no means the only such occasion, however other families are fearful of possible reprisals and do not want publicity.

At a press conference on June 22, human rights lawyer Alexander Popkov who has known Kuku for a long time and is now representing him recounted how a person who said that he was from the FSB [Russian Security Service] turned up at Bekir’s school in April, around a month after Kuku and 3 other men were arrested, and took him aside.  The man said that Bekir’s mother had probably told him and his 5-year-old sister Safiyeka that their father was away on a business trip.  The man then said that this was not the case.  Bekir’s father had got involved with bad men, he claimed, who preached Islam to those of other faiths, and they had behaved badly.  “Your father will now spend 10-12 years in prison.”

Popkov stresses that they had proof that Bekir had not made any of this up, and a formal report was lodged.  They even found the man involved who said that he had been obeying an order from one specific FSB officer.

Kuku’s lawyer has been forced to sign an undertaking not to disclose information about the case.  He was, however, able to reveal more details about the previous harassment which Kuku was subjected to.   Popkov believes that these confirm the suspicion reported here that Kuku is now in prison specifically for his human rights activities.

Emir-Huseyn Kuku turned 40 on June 26 in the Simferopol SIZO [remand prison].  He is a lawyer by profession and became the Yalta region representative for the Crimean Contact Group on Human Rights after the abductions and disappearances of young Crimean Tatars which followed Russia’s invasion and annexation of Crimea.  He was responsible for monitoring rights abuses in the area, and was always willing to help people.  None of this would have pleased the local FSB.

It is over his first detention on April 20, 2015 that Popkov has been able to provide vital and disturbing information.  It seems likely that the initial plan was not to arrest Kuku, but to abduct him.  This is especially worrying given the recent abduction of another prominent Crimean Tatar activist Ervin Ibragimov who was seized by men who appeared to be in uniform on the evening of May 24.  He has not been seen since.

According to Kuku, he was set upon by two men near his home.  He began struggling, and thankfully came out onto the road where drivers who knew him stopped to come to his aid.

It was only then that the men turned out to be FSB officers who carried out a search of his home and then took him away ‘for questioning’.  As reported at the time, they removed both his and his wife’s laptops, a telephone and seven religious books which were not on Russia’s list of prohibited literature.   He later posted photos of the marks from beating he had received, and said that if he disappeared, they should look for him at the Yalta FSB office.

After his release, he and Popkov formally demanded an investigation. This produced contradictory statements from the FSB officers and probably renewed determination to get rid of Kuku.  Popkov says that all the material demonstrates that the intension was to prosecute the human rights activist, with the article of the Criminal Code a secondary consideration.

In December 2015 new charges seemed to have emerged under Russia’s notorious ‘extremism’ laws.  This was in connection with material posted on his Facebook page.  There were around 42 texts, with many of them posts, or reposts, on religious subjects. At that stage, the charges seemed likely to be of ‘inciting interethnic enmity’.  The FSB apparently also objected to simple reposts, without any added commentary, of news on political issues.

There was no mention then of Hizb ut-Tahrir, yet a mere two months later Kuku and three other Crimean Muslims – Muslim Aliev, Enver Bekirov and Vadim Siruk were arrested and charged with ‘involvement in a terrorist organization’, namely Hizb ut-Tahrir.  This pan-Islamist organization is legal in Ukraine and in most other countries.  Russia’s Supreme Court declared it a ‘terrorist’ organization, without providing any possibility for members to be present or for human rights organizations to appeal the decision.  No sensible explanation for the accusations has been given, and the Memorial Human Rights Centre considers all those sentenced to long terms of imprisonment merely for (alleged and seldom proven) membership of Hizb ut-Tahrir to be political prisoners.  The equally reputable Sova Centre agrees that the organization can in no way be considered terrorist.  More details here Russia’s Conveyor Belt of Repression in Occupied Crimea.

There is no evidence that the men have anything to do with Hizb ut-Tahrir, and indeed the only specific detail in the indictment is about an alleged private conversation.

This is probably the reason that Russia is seeking to make these trials of Crimean Muslims secret.  The trial of the first four men – Ruslan Zeitullayev, Nuri Primov, Rustem Vaitov and Ferat Saifullayev – has already demonstrated that there is quite simply no evidence without coming up with secret and highly questionable ‘witnesses’.

Popkov noted that in Crimea there is already the belief that if you’re not religious, Russia will try you for so-called ‘extremism’.  If you’re a practising Muslim, they’ll make it ‘terrorism’.

Beyond that, just about anybody will do.  And then they’ll also try terrorizing their children.