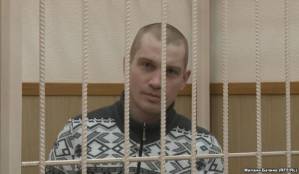 On the evening of March 31, Aleksandr Markov heard the doorbell and rushed to open the door of his St. Petersburg apartment. But instead of the guest he had been expecting, Markov was surprised to see several strangers on his doorstep.

Then came the blow.

"I was hit in the eye, " he tells RFE/RL. "I found myself in the staircase. Someone pushed me from behind and I fell over. They started kicking me."

The assailants fled the scene only after Markov screamed for someone to call the police.

The incident is the latest in what appears to be astring of assaults and arson attacks targeting Russians who have openly criticized their government on social-networking sites.

Markov co-administers an opposition group called Criminal Authorities on VKontakte, Russia’s largest social network. The group has about 14, 000 members and openly denounces Kremlin policies, including those pertaining to Ukraine.

"Since November, there has clearly been a deepening crackdown on what people are writing, especially on VKontakte, " says Andrei Soldatov, a noted Russian security expert. "It’s obvious that VKontakte is under close scrutiny."

In addition to being assaulted, Markov has also been harassed online for weeks. A VKontakte account recently created under the name Aleksandr Petrogradsky offers to send viewers detailed information about him.

Meanwhile, Markov’s brother has received a threatening message from an anonymous user.

"We have long talked about Aleksandr Markov, a former DJ at a gay club, " the message reads. "Sometimes he’s beaten up. When will normal guys finally see this &#146artwork.’ (sic) I know three of them, but they are currently on an expedition. They said they will return and deprive Markov of something that will never grow back."