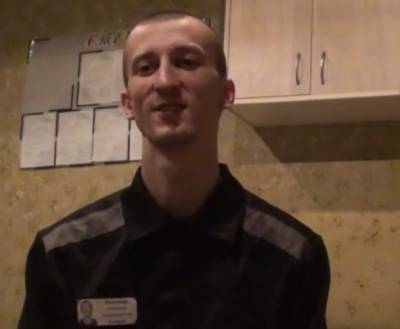 Oleksandr Kolchenko, the Ukrainian civic activist tried together with filmmaker Oleg Sentsov on involvement in a non-existent ‘terrorist plot’, has been refused a visit from the Ukrainian consul with the prison authorities claiming that Kolchenko is a Russian national.  Most ominously, he is being put under pressure to sign a Russian passport they have already prepared.

He does not get into arguments with the prison staff and simply refuses to sign anything without speaking first with his lawyer, Svetlana Sidorkina who is planning to visit Kolchneko next week.

Information about the renewed attempts to foist Russian citizenship came from Tatyana and Nikolai Shchur, human rights activists in Chelyabinsk who have just visited Kolchenko in the prison colony.  They say that he himself seems calm and unstressed, and has even put on a bit of weight and looks better for it.

Oleg Sentsov is being held in a prison in the Yakutia region which is even further east, and there is no information at present about whether he has been subjected to the same pressure.

None of this is new, but that makes it all the more disturbing since the issue was supposed to be closed.  Back in March 2016 the outgoing Russian Ombudsperson Ella Panfilova wrote in her 2015 report that in response to Sentsov and Kolchenko’s complaints, “legal uncertainty regarding their citizenship has been removed and their Ukrainian citizenship recognized”.

Back in April 2015 Kolchenko’s lawyer lodged an application with the European Court of Human Rights over the persistent denial of his Ukrainian citizenship.

Kolchenko, Sentsov and two other opponents of Russian annexation of Crimea – Gennady Afanasyev and Oleksiy Chirniy – were all arrested in May 2014 and  imprisoned in Russia.  Earlier in June 2016 Afanasyev was released together with Yury Soloshenko in exchange for two Ukrainian nationals held by Ukraine on separatist charges.  At that time, Russian President Vladimir Putin’s press secretary Dmitry Peskov said that any release of Sentsov and Kolchenko would be decided by Putin.  Aside from the reference to Putin’s role in the men’s release stating what everybody knows all too well, the fact that their release had even been mentioned seemed potentially a good sign.

Reversion to shenanigans with passports is not.  These began soon after the men were arrested.  Russia’s occupation authorities had demanded that people formally register their rejection of Russian citizenship.  It had provided a totally unrealistic timeframe for this and not informed people of the requirement.  It is not, in any case, clear that Kolchenko and Sentsov would have agreed to formally apply to keep the Ukrainian citizenship which was theirs by right.

Both men were handed Russian passports which they expressed  protest over and refused to accept.  In January 2015 a Crimean court denied Kolchenko the right to retain Ukrainian citizenship.  The Russian authorities claimed that Kolchenko had himself officially applied for Russian citizenship, but provided no evidence to back this.

These attempts to force Ukrainian political prisoners to ‘become Russian’ in order to deny them their rights under Ukrainian and international law have been condemned by the international community, as have the trial itself and their monstrous sentences.

Kolchenko, Sentsov, Afanasyev and Chirniy were held incommunicado for weeks before being taken to Russia in late May 2014.  All four men were subjected to torture to extract ‘confessions’ to having been involved in a ‘Right Sector terrorist plot’.  There was nothing to indicate any presence of the ultra-nationalist Right Sector in Crimea, and the idea that Kolchenko, who is a committed left-wing anarchist would have taken part in a far-right movement’s ‘plot’ was absurd.