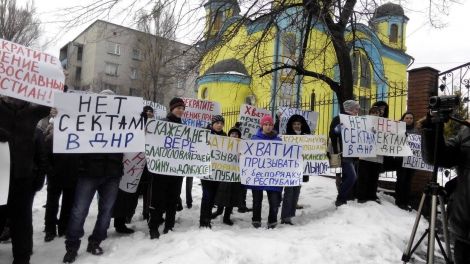 While Russia continues, without any credibility, to deny its undeclared war against Ukraine, the Kremlin’s proxies in Donbas are introducing measures to ‘combat the ideology of extremism and terrorism’ copied straight from the Russian original.

Famous Ukrainian opera singer and patriot Vasyl Slipak was killed in the early hours of June 29 by a Kremlin-backed militant sniper near Luhanske in the Donetsk oblast.  Slipak had been a soloist for the Paris Opera House for 19 years, but returned in 2014 to defend his country after Russia’s annexation of Crimea and undeclared war in eastern Ukraine.

That war is supposedly not waging yet the fighting and the deaths continue.  Russia in turn continues to deny any part in the conflict, and even any responsibility for fulfilling the Minsk Accords.  The military equipment and weapons are all from Russia, as are a significant number of the fighters, and it is the Kremlin that ultimately controls the militants’ actions.

Now the DNR militants have set about introducing a Russian-style plan for countering what Moscow terms “the ideology of extremism and terrorism”.

Plans were discussed on June 28 on drawing up and passing a comprehensive plan with models freely available since Russia has identical plans at both national level, and for particular regions.  In Russia, the measures have resulted in large numbers of arrests and prison terms, such as the 3-year sentence imposed on Rafis Kashapov for criticizing Russia’s annexation of Crimea.

In Donetsk, they discussed coverage of the ‘fight against terrorism’ in the media, coordinating ‘legislative’ and executive measures and, ominously, ‘religious extremism’.

In both Russian-occupied Crimea and the so-called ‘republics’, all faiths except the Orthodox Church under the Moscow Patriarchate have been subjected to persecution over the last 2 years.  A 2015 study ‘When God becomes the weapon’ presents considerable evidence of religious persecution by militants in Donbas, and of the role played by Russia and its armed criminal ‘crusaders’ in crimes against humanity in the region.

Plans to counter ‘religious extremism’ will not, unfortunately, be directed at the members of armed paramilitary groups fighting under the banners of the Russian Orthodox Army and the Cossack Army who are indeed guilty of grave crimes.

A large number of representatives of different faiths targeted or likely to be the next victims of abductions, etc. have left Donbas, but not all.  Exactly six months ago, the militants brought in public sector workers for an organized demonstration outside the Ukrainian Greek-Catholic Church in Donetsk.  The ‘demonstrators’ were supposedly calling on DNR leader Alexander Zakharchenko “to drive out sectarians”, who were alleged to be Western-paid or even linked with the CIA.  Shortly before this 60-year-old religious expert and university lecturer Ihor Kozlovsky was ceased by the DNR’s ‘security service’.  Whether his involvement in the Ukrainian Greek Catholic Church and his active part in Christian – Muslim dialogue are to lead to charges of ‘religious extremism’ or whether the militants will just opt for ‘spying’ remains unclear, but Kozlovsky has still not been released.

Some of the methods used so far are to be continued, just with a ‘counter-extremism’ coating for the old Soviet tactics against ‘dissidents’.  In May 2015, for example, the militants ripped down the memorial plaque on Donetsk National University to Vasyl Stus, the poet, human rights defender and Ukrainian patriot who died in the notorious Perm-36 labour camp in September 1985.  They also announced plans to dismantle the Memorial to the Victims of Political Repression and Holodomor in Snizhne (Donetsk oblast), claiming such a move to be aimed at the “reinstatement of historical justice”.

Now the fight is against ‘extremists’ and ‘terrorists’.  One of the steps announced on Tuesday was the removal of all books from libraries under their control which write about the Organization of Ukrainian Nationalists [OUN] and Ukrainian Insurgent Army [UPA].   The so-called deputy minister of culture makes it quite clear what kind of ‘extremism’ they will be fighting.  She explains that they have been going through the libraries to identify books with “signs of extremism” and have so far found 266.  “This is distortion of historical facts, glorification of the OUN-UPA, a negative attitude to Russia, etc.”

It is possible that the ‘roundtable’ etc. were merely laid on to prove their subservience to Moscow.  They come, after all, as Russia’s upper house of parliament has just approved frighteningly repressive ‘anti-terrorist’ laws which seriously increase control over the Internet, impose possible 15-year sentences for something called “facilitating extremist activities” and criminalize failure to denounce others.  The militants, after all, know who pulls their strings.