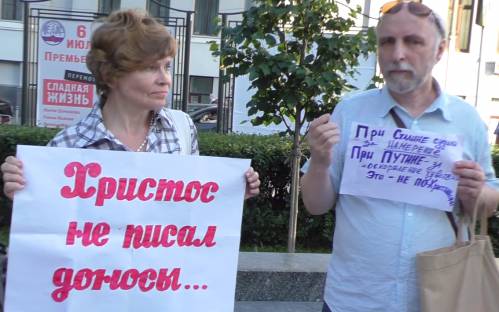 A group of courageous Christians from different denominations have held a third picket in Moscow asserting that denunciations and prosecutions for ‘offending believers’ feelings’ run counter to Christ’s teachings.  The picket this time came on the day that Russia’s upper house of parliament ignored widespread protest and adopted one of the most repressive bills to date, and there have been many. The law criminalizes, among other things, failure “to report” a dangerously broad list of crimes and supposed crimes. This seems very likely to be used for putting pressure on people to give false testimony against others.

Around 20 people took part in the meeting which had been agreed with the authorities.  Their placards included the following:  “Christ did not write denunciations”; “Of all the Apostles only Judas denounced [Christ]” and “Christ was accused of blasphemy and prayed on the cross for his enemies.  Imprisonment for blasphemy is the greatest blasphemy!”   The picketers called for the release of Mikhail Kormelitsky, the young man from Berdsk in the Novosibirsk area who was recently jailed for 15 months over literally one picture with a caption on his VKontakte social network page.

In January 2016 Kormelitsky posted a photograph of people taking part in the Epiphany ice hole bathing, expressing doubts “about the mental state of people who risk their health for the sake of religion”.  He ended up in court charged under Russia’s increasingly abused ‘extremism’ legislation.

The prosecutor argued and, seemingly, the judge accepted, that Kormelitsky had insulted people out of hatred to Christians.  He was convicted under Article 282.1

The picketers were also there in defence of Viktor Krasnov who is currently on trial and faces a similar sentence for a post on VKontakte in which he wrote only that “there is no God”.   He is charged also with “offending the feelings of believers” under a repressive bill introduced in 2013.

Human rights activist Yelena Sannikova says that she looks at the people who are now writing denunciations against people like Kormelitsky or Krasnov and asks herself where they would have been in Soviet times when people were thrown out of their jobs (or worse) for going to church.  She suspects that then they were in the Komsomol or Communist Party and wrote denunciations against believers.  Now they have joined the Orthodox Church but they themselves have stayed the same and retained their “totalitarian aggression”.

Christianity is not an appendage to state ideology, it was stressed.

There is close collaboration between the hierarchy of the Moscow Patriarchate and the authorities, and the reminder to give unto Caesar what is Caesar’s does not appear to penetrate.

Unless Russian President Vladimir Putin suddenly does what nobody is expecting and vetoes the so-called ‘anti-terrorist legislation’ just passed, the situation can only get worse.

It is difficult to estimate the full repressive force of the bill just passed without considering the kind of prosecutions seen over recent years.  In Russian-occupied Crimea, 14 Crimean Muslims are facing long sentences for alleged ‘terrorism’.  The latter supposedly lies in unproven membership of the Hizb ut-Tahrir movement which is legal in Ukraine and most countries.  Crimean filmmaker Oleg Sentsov and Oleksandr Kolchenko also received long sentences although there was manifestly no ‘terrorist plot’.  Crimean Tatar leader Akhtem Chiygoz and two other Crimean Tatars have been in custody for well over a year facing absurd charges connected with a pre-annexation demonstration over which Russia can have no jurisdiction.  Another Crimean Tatar leader Ilmi Umerov and journalist Mykola Semena are facing charges of ‘public calls aimed at encroaching on Russia’s territorial integrity”.    The men are, in one way or another effectively facing criminal charges for stating that Crimea is Ukraine.

All of this falls under Russia’s ‘extremism’ and ‘terrorism’ legislation for which the sentences have just been made absolutely draconian.

There is now a chilling new article of the Criminal Code which criminalizes something called “recruiting or otherwise involving” others in organizing mass unrest, with the sentence between 5 and 10 years’ imprisonment.  What the Russian authorities dub ‘mass unrest’ is dangerously broad, and the substantial number of political prisoners include many who were simply exercising their constitutionally guaranteed right to freedom of peaceful protest.

It will now be possible to prosecute a 14-year-old for so-called ‘participation in mass unrest’, for failure to denounce somebody and on a number of other charges.

The law also has grave implications for people’s privacy since new requirements are introduced on how data must be stored.  Any provider encrypting material will be obliged to decipher it for the FSB.