Russia says Poland, not USSR, was Hitler’s Ally and Responsible for HolocaustKremlin-funded Sputnik Int. claims West criticizes Stalin to weaken Russia & its leadershipKremlin’s proxies purge memory of victims of Holodomor and political repressionRussia’s ’new approach’ to Stalin and extended secrecy about his victimsStalin Museum: Putin’s Russia Immortalizes Bloody DictatorAnger and Protest over Stalin Monument in YaltaPortrait of Stalin appears in Russian-occupied CrimeaStalingrad as latest step in re-glorification of tyrantNeo-Nazis in Moscow’s ServicePro-Russian separatists start their own anti-Semitic TV channelPro-Russian, anti-Roma, anti-Semitic and hunting out Ukrainian speakersThe Donetsk anti-Semitic leaflets – what should not be overlookedEast Ukraine crisis and the ’fascist’ matrixRussia continues its false narrative as defender of oppressed minorities in UkraineRussian propaganda claims Jewish organizations supporting Maidan are bringing on "second Holocaust"The Crimean referendum’s neo-Nazi observersPutin’s Neo-Nazi HelpersChief Rabbi and others dismiss Putin’s “anti-Semitic extremist” claimsRussian propaganda must be challengedWestern Media: Don’t distort the situation in Ukraine!
• Topics / News from the CIS countries 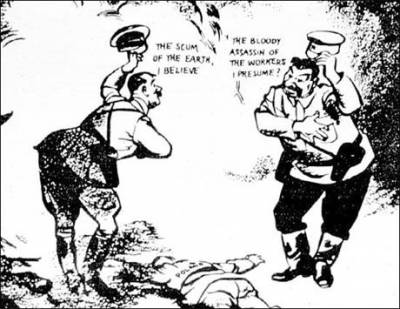 Hitler and Stalin over the dead body of Poland (Herblock)

37-year-old Vladimir Luzgin has been convicted and fined 200 thousand roubles for reposting on his social network page a text which correctly states that the Soviet Union, in collaboration with the Nazis, invaded Poland in 1939.  A Russian prosecutor claimed and a court in Perm accepted that Luzgin was guilty of posting “knowingly false information”.

Kommersant reports that Luzgin is the first person in the Perm region (and probably in Russia) to face criminal prosecution under a highly controversial law envisaging anything from fines to five years’ imprisonment for so-called ‘rehabilitation of Nazism’.  The law, signed by President Vladimir Putin in May 2014, was an earlier opus from Yelena Yarovaya, co-author of a recently adopted and terrifying repressive ‘anti-terrorist bill’.

The law claims to be aimed at opposing the glorification of Nazism and distortion of historical memory.  The renowned Sova Centre disagrees and believes its aim is to prohibit historical discussion.

In fact, the Perm ruling effectively criminalizes mention of inconvenient historical fact.  The article “15 facts about Banderites, or what the Kremlin is silent about” contains some contentious assertions about the Ukrainian nationalist leader Stepan Bandera and the Ukrainian Insurgent Army [UPA], and is certainly not expressed in the language historians would use.  Luzgin, however, was mainly prosecuted over the following:

The prosecution claimed that this contradicted “facts established by the Nuremberg Tribunal”.  The reference to the Nuremberg Trials was doubtless intended to give the law some respectability, but only accentuates the absurdity of the situation.  Any reputable historian will confirm that the Soviet Union invaded what was then Poland on September 17, 1939.

They could hardly deny it when the Molotov-Ribbentrop Pact and its secret protocols carving up Poland between the Soviet Union and Germany have long been public knowledge.

Yet the dean of the Perm University’s History Faculty Alexander Vertinsky still appeared as a witness for the prosecution and claimed that the material contained “statements that do not correspond with the position accepted at international level”.

Even if the statements which Luzgin only reposted on his personal VKontakte page had been incorrect, the criminal prosecution would be extremely disturbing.

Given that Luzgin has effectively been convicted of reposting facts that Putin’s Russia prefers to whitewash, but which it cannot change, the court trial is chilling.

The ruling was unfortunately not surprising given the direction Putin’s Russia has been moving, towards whitewashing the crimes committed by bloody dictator Joseph Stalin and further restricting access to archival documents.

In parallel with its military aggression against Ukraine, the Kremlin has been trying to reinstate the Soviet narrative about the Second World War in which details of the first almost 2 years during which the Soviet Union was Hitler’s ally are blurred, and the collaboration justified.

At a press conference with German Chancellor Angela Merkel on May 10, 2015, Putin defended the Molotov-Ribbentrop Pact, claiming that the Soviet Union was being left to face Hitler’s Germany by itself.   Russia’s culture minister Vladimir Medinsky called the pact a "colossal achievement of Stalin’s diplomacy."

Things got even worse soon afterwards.  On September 20, 2015, Russia’s ambassador to Venezuela Vladimir Zayemsky claimed that the Soviet Union did not invade Poland on Sept 17, 1939 and that it was in fact Poland, not the USSR, that collaborated with Nazi Germany.  He wrote that “the alleged invasion by Soviet forces of Poland in 1939 is a lie” and went on to claim that although Poland was the first victim of WWII, it tried to be “Hitler’s faithful ally” in the period before the War.  “It was Warsaw’s pro-fascist stand which made a treaty of cooperation between the USSR, Czechoslovakia and France impossible”, he alleged.  The same offensive attempts to rewrite history were presented by Russia’s ambassador to Poland Sergey Andreyev a few days later, speaking on Polish television.

Andreyev claimed that the Soviet invasion on September 17 had not been an act of aggression, but a defensive act to ensure the security of the USSR.

An argument eerily close to Putin’s attempts to justify Russia’s invasion and annexation of Crimea in 2014.