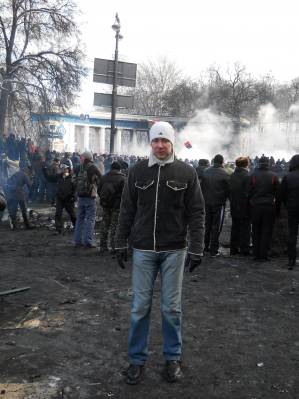 Vyhivsky on Maidan, January 2016 (Russia’s secrecy means that there have been no photos for almost 2 years)

He was moved in the middle of May to a prison colony in the Kirov oblast in Russia.  Most worryingly, according to Artur Abashev, a Russian human rights activist who has visited him, Vyhivsky is being held in solitary confinement without any contact with other prisoners and is not taken out from his cell.  He is being held in such conditions without radio, TV or even newspapers.  All of this is in flagrant violation of Russian and international law, and likely to cause grave psychological damage.  No information has been given as to the reasons.  Abashev told Vyhivsky’s father Petro that it could be because there are prisoners from the Donetsk and Luhansk oblasts who were clearly involved in the military conflict on the side of the Kremlin-backed militants.  While Vyhivsky is certainly pro-Ukrainian and took part in Euromaidan, fear of conflict would not explain why he is being deprived of even indirect contact with the world via radio or newspapers.

Vyhivsky was seized in September 2014, while on a trip to Simferopol which was already under Russian occupation.  It appears that a number of people were rounded up at the railway station by the so-called ‘self-defence’ paramilitaries who helped Russian soldiers seize control in Crimea.  Petro Vyhivsky believes that the paramilitaries may have noticed his son’s Kyiv registration and have found out that he was on Maidan.  Valentin was last seen at the former Simferopol SBU officers, having obviously been beaten.

During the first 8 months of his captivity, he was only allowed to meet Russian human rights activist Zoya Svetova.  She noted that Vyhivsky was clearly frightened and unwilling to even say what article of the criminal code he was charged under.  The Ukrainian consul was only allowed to see him after 8 months, and then in the company of two guards who immediately stopped them if they tried to talk about anything but ‘neutral subjects’.  The same thing happened when his mother was allowed a visit after 9 months.  He managed to tell her only that “they know how to persuade you”.

His mother and wife were able to visit him only one more time and for no more than an hour while he was still held in Moscow.  Again, they were separated by glass and a guard stood next to Vyhivsky, controlling what he said.

The 33-year-old was sentenced in December 2015 to 11 years in a maximum security prison.  Russia’s Supreme Court upheld the mystery conviction on March 31, 2016.  By that stage, Vyhivsky at least had a proper lawyer Ilya Novikov, but the hearing was held in secret and Novikov was forced to sign an undertaking not to divulge any information.  It is very likely that the information included details about torture used to ‘persuade’ Vyhivsky to confess.

Ukraine’s Foreign Ministry has lodged all the documents asking for Vyhivsky’s extradition, however Petro Vyhivsky says that his son has not yet seen any papers which he would certainly need to fill in.   The problem here, as with all Russia’s Ukrainian hostages, is that their sentences are manifestly unwarranted, and Ukraine can certainly not agree to hold the men in prison if returned.  The Minsk Agreements clearly state that all persons illegally held should be exchanged on an all for all basis.  Western countries have made it clear that this includes Ukrainian filmmaker Oleg Sentsov and others, with this surely including Vyhivsky.  If Russia had any grounds for trying the Ukrainian, they would not have resorted to abduction, torture and total secrecy.  Petro Vyhivsky has literally no idea what the charges consist of, and it is likely that his son had no real defence at all.  There was a state-appointed ‘lawyer’ before and at the first trial who got in touch with the family, but behaved in such a strange manner that in the end the family stopped even communicating with him.  At one point this supposed lawyer had demanded that Vyhivsky Senior come to Moscow together with his elder son.  The Ukrainian SBU warned them against doing so, saying that they could well also be taken hostage.

With supreme cynicism, Russia has also demanded payment of 19 thousand roubles for ‘court expenses’.  This is a considerable amount for his family, but his father says they have managed to raise it and now need to find out how to pay it.

Vyhivsky’s lawyer says that if he really had been a spy, it would have been easier to defend him and get him out of Russia.  Now the top secrecy is over the lack of any grounds for imprisoning him and the means that he was ‘persuaded’, while held totally incommunicado, to testify against himself.

Valentin Vyhivsky’s son has just finished first grade.  His grandparents and mother cannot bring themselves to tell him why his Papa is not at home with them.

Please write to Valentin Verhivsky and show him – and Moscow – that he is not forgotten!

[Hello, Valentin, with best wishes for good health, courage and patience.  I hope that you will soon be back home with your family].